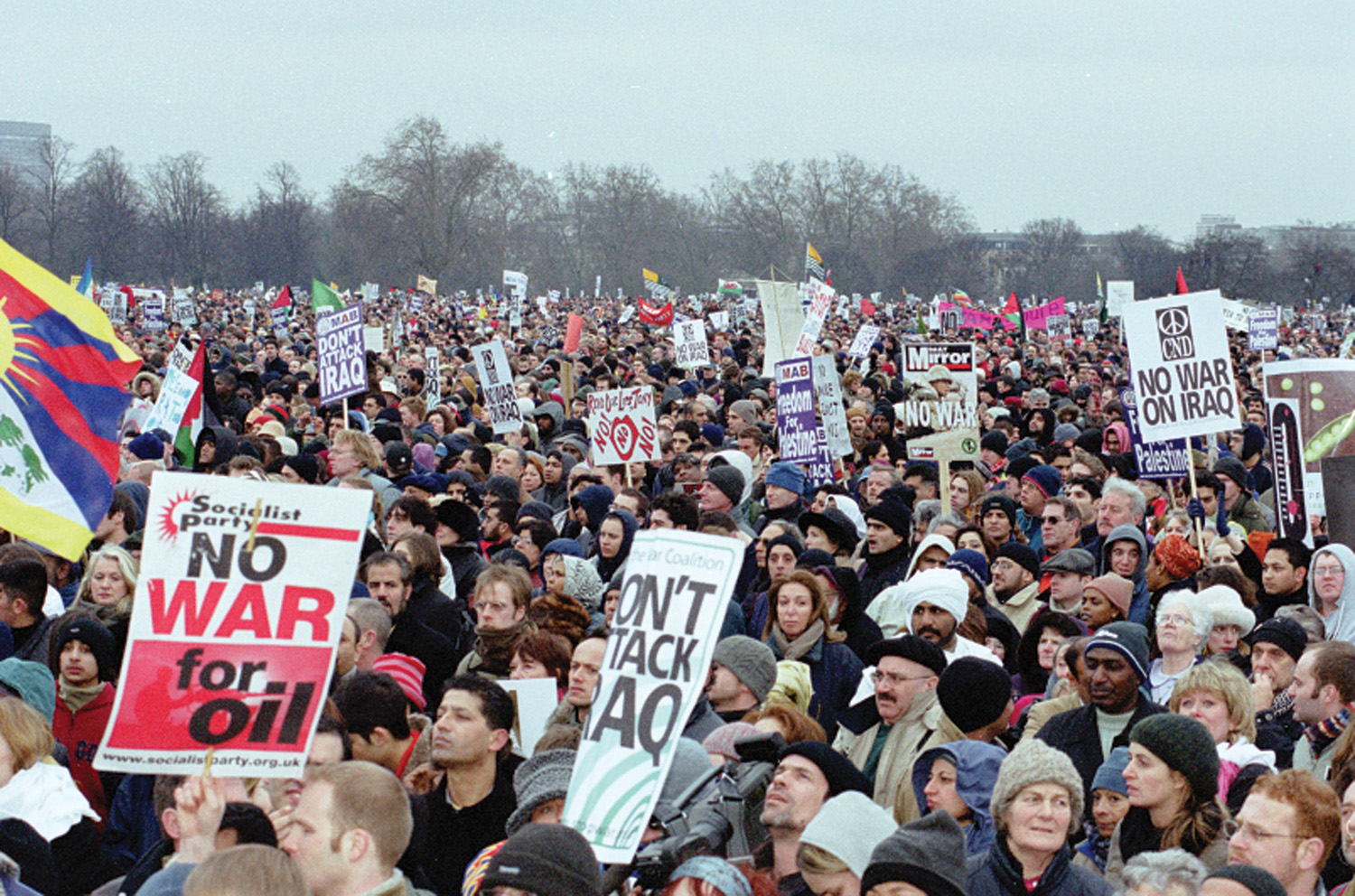 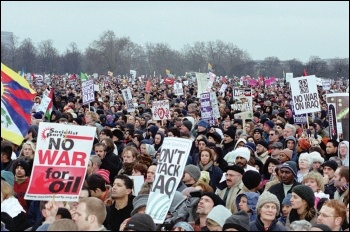 Part of the massive demo against war in Iraq, 15 February 2003, photo Molly Cooper   (Click to enlarge: opens in new window)

On 20 March 2018 it will be 15 years since we woke up to footage of the invasion of Iraq by US and UK forces. The Iraq War was an enormous charge detonated deep in the earth which has shaken and continues to contribute to the instability of millions of lives but also of all capitalist institutions and politics – on the left and right.

World relations have been transformed. Bush’s ‘New American Century’ foundered on the disaster of Iraq. Today the US is still the greatest military power but 2003’s unipolar world is no more and tensions between the different imperialist powers reverberate throughout the world – including trade wars and actual wars.

A quick war, ‘shock and awe’ was promised to deliver a new world and a flowering of democracy in the Middle East. Instead that war (and the world capitalist crisis of 2007-8 that it helped prepare) opened the way to multiple wars since and still today. Iraq itself knows no peace. A million died during the invasion.

From Sri Lanka in 2009 to Libya, to Yemen, Sudan to Afrin, and more – brutal regimes have taken Bush’s approach to the so-called ‘axis of evil’ as a licence to massacre. There are over 65 million refugees in the world. What a monstrous quantity of human suffering that figure represents.

The US working class is paying that price – and for the bankers’ crisis of 2007-8. Trump’s 2019 budget proposes to cut food stamps by more than $213 billion over the next ten years.

“No blood for oil” was the slogan adopted in particular by young people there and on the incredible school student strikes. That slogan reflected the understanding that the world’s capitalist powers prioritised profits over people.

Corbyn’s anti-war record was definitely a factor in his stunning 2015 victory in the Labour leadership election. Unfortunately the parliamentary Labour Party remains dominated by warmongers like Hilary Benn and Stella Creasy.

Today we need a movement to remove them as part of the fight for the mass socialist workers’ political voice we need to fight war, austerity and capitalism. 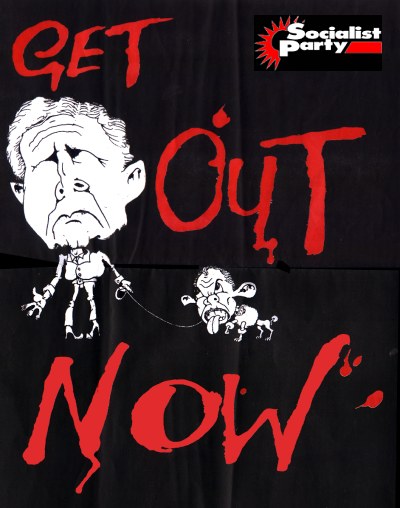 As we go to press, the battle for Baghdad seems about to begin. It is still too early to get an exact picture, but if the first phase of the war is anything to go by the next stage could be far from the ‘cakewalk’ that some military analysts predicted.

The US/British war plans have not kept to the script. Superior military airpower was meant to create such ‘shock and awe’ that the regime would crumble, troops surrender and Iraqis in the towns rise up and welcome US and British forces as ‘liberators’ from the tyrant Saddam Hussein.

Supply lines have come under attack and, according to Unicef, in Basra – a city of two million people – there has been no water or electricity and a humanitarian disaster is developing. At least 100,000 children under five are at risk from disease.

Although there is hatred for Saddam’s vicious regime, there appears also to be a willingness by significant sections of the population to fight what is perceived not as a liberating army but as a force of domination and conquest.

As one Iraqi returning from Jordan to Baghdad explained: “I’m not fighting for Saddam, I’m fighting for Iraq.” Iraqi ‘returnees’ have paid up to £1,000 for taxi rides back to Iraq to fight the ‘imperialist invaders’. Iraqi nationalism could prove to be a much greater force than US and British imperialism expected.

The situation could also be complicated by the ‘war within a war’ that could potentially break out between Turkish and Kurdish troops in the north.

In both countries, as expected, the outbreak of war resulted in an initial decrease in opposition. There is a feeling among some people, encouraged by some ‘anti-war’ politicians like the Liberal Democrats, church leaders etc, that now that the war has begun they should ‘get behind’ the troops whose lives are being put at risk.

Nevertheless, two days after war broke out, an anti-war demonstration of between a quarter and half a million took place in New York, and a similar number protested in London – the biggest wartime demonstration in Britain.

Media commentators are speculating on how high the ‘pain threshold’ is in the US. If casualties mount in a prolonged conflict, the mood could swing rapidly back against war.

The ‘Vietnam syndrome’ has not been completely buried. After the Vietnam war, when 57,000 US troops were killed, US administrations had to be careful to avoid any military engagements that might result in significant US casualties.

As Major-General Peter Currie bluntly stated in the Daily Mirror: “We don’t want to reduce to rubble a country that we shall have to rebuild.

“That is not the only reason. In a war so politically highly charged, which has divided the nation straight down the middle, collateral damage could be more than just costly – it could be catastrophic.”

It is wrong to assume that nothing can be done now that the war has begun. However, the anti-war movement has to do more than “shout a bit louder,” as some leaders of the Stop the War Coalition have suggested.