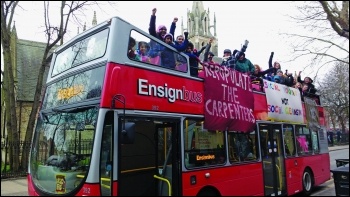 The single mums Wales evicted from the Carpenters Estate in E15 celebrated his deselection by chartering an open-top bus around Newham, photo James Ivens   (Click to enlarge)

Hated Blairite mayor of Newham Sir Robin Wales has lost the Labour candidacy. We congratulate Councillor Rokhsana Fiaz on being selected as the candidate for the upcoming May elections.

Wales has presided over decades of cuts to services and council jobs, the eviction of the E15 single mums, and massive privatisations. He led the east London borough's council for 23 years.

Before that, in the 1970s and 1980s, Wales played a major role in expelling Militant - forerunner of the Socialist Party - from Labour. He once took part in the 'Icepick Express' contingent of right-wingers to Labour student conference.

We believe Rokhsana represents a break from this. We look forward to working with her and any Labour Party members who want to use this as an opportunity to fight cuts and sell-offs in Newham.

Newham council recently voted to reverse its long-held position of support for academisation. We believe Rokhsana and other anti-academies councillors should commit to calling a referendum on academies in Newham. At Avenue School, a survey of parents returned a resounding no to academies with 132 votes to four.

It's also vital that an anti-austerity mayor use council reserves and borrowing powers to end the cuts now. By mobilising the local workforce and community, we can fight for more funding from central government.

The removal of Robin Wales shows ordinary Labour members are willing to campaign against Blairite policies at a council level in Newham.

I stood as a Trade Unionist and Socialist Coalition (TUSC) candidate contesting the mayor's pro-austerity position in 2014. Then and now, TUSC's policies are much closer to Jeremy Corbyn than the vast majority of Newham Labour councillors.

TUSC will not be standing for mayor against Rokhsana in May as her selection is a positive step towards a fightback in Newham. We hope to work with her in fighting cuts and privatisation.

But we are planning to stand against the worst and most vicious Blairite and pro-academies councillors in Newham. These councillors have nothing in common with Jeremy Corbyn or those who have been inspired by his leadership.