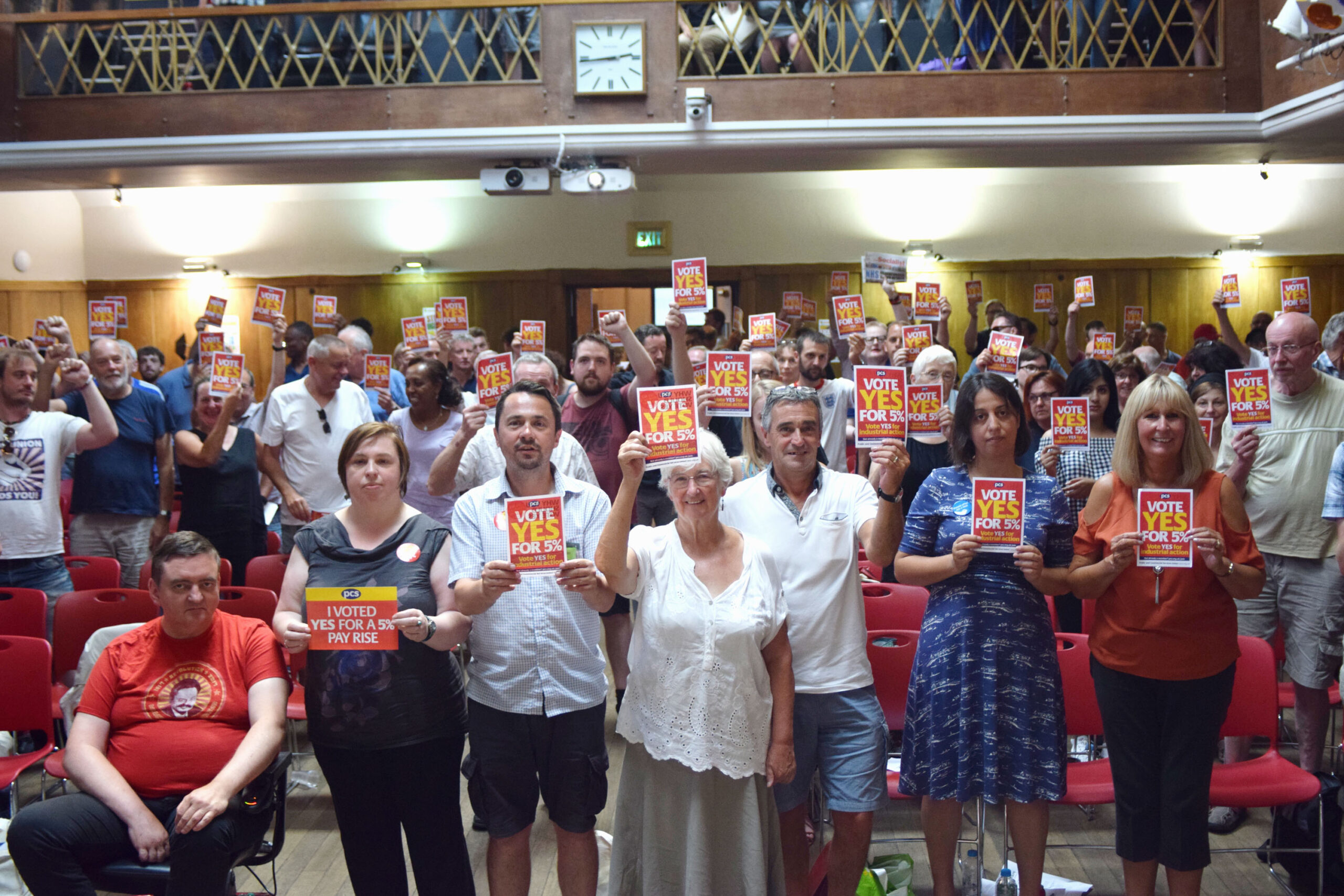 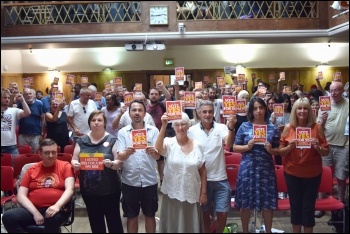 “I’m sick and tired of hearing that the trade union movement is on its way out,” declared Linda Taaffe in opening the National Shop Stewards Network (NSSN) conference on 7 July. Part of the reason the lie can be told she said, “is the TUC itself. Where has the TUC been in the recent period?”

The conference had been truncated to finish in time for England’s quarter final World Cup match, but still the room was full, with working class fighters having come from far and wide to hear from each other and share experiences.

“The NSSN is an example of how true solidarity works. Everywhere there’s a dispute, the NSSN stretches out a hand of solidarity and support when our members need it most.”

Terry Pullinger, deputy general secretary (postal) of the Communication Workers Union (CWU) spoke about the political change signalled by the swelling of support for Jeremy Corbyn. Young people have backed him because they rightly believe there’s a need for politicians who fight for them. “But we know we can’t just rely on politicians… We need unions to be the strong influence and we will always be necessary – whatever party’s in government, workers’ voices need to be heard.”

Terry outlined the vibrant approach the union had taken to the recent dispute with Royal Mail, which he said has reenergised him and the union in general. “We had to be in every workplace, have a rep on every shift – it’s workplace trade unionism that makes a difference.”

Using social media videos and messaging, national union leaders could reach into every workplace, he explained. But the most important organising tools were things like ‘gate-meeting days’. The result was a 90% Yes vote for action on a 74% turnout and the company backed down on its proposals before action even needed to be taken.

BFAWU bakers’ union president Ian Hodson talked about the union’s work ‘organising the unorganised’, particularly in fast food. Ian recounted outrageous stories of McDonald’s workers being harassed after leaving abusive relationships, people with learning disabilities being told they have to put up with bullying from customers and the poverty pay resulting in workers living on friends’ sofas for long periods. The strike action against these conditions is “the start of a new movement,” he said. 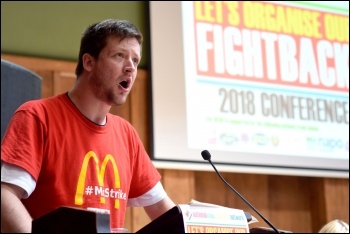 Similar conditions exist in retail, as explained by Amy Murphy, newly elected president of the Usdaw shopworkers’ union. 60% in the sector are on zero-hour contracts.

The current high street crisis, which has seen a number of household names close or make big cuts, is adding to the problem: “Who suffers in the end? The workers.” But, Amy pointed out, “there are 6.5 million trade unionists. If we stand together, we can make a difference and we will make a difference.”

“Last year we went to the big court and now we’re under a super-injunction – we’re not allowed to do anything… since then we’ve been on strike four times!”

Joe argued that the anti-trade union laws in the 2016 Trade Union Act should be brushed aside by all unions: “Bad laws are meant to be broken.”

He described the anger felt by many workers at the lack of a lead from the TUC on this and other issues that action could be coordinated around. “Every worker from everywhere in the UK needs to go on strike to protect what is ours.”

PCS assistant general secretary Chris Baugh also highlighted the lack of leadership from the TUC, as well as the need for the left unions to act together regardless. “If the TUC is not prepared to provide leadership, we have to work together on how we use the enormous latent power of the trade union movement.”

He pointed to a number of key disputes in the recent period that show the power of the unions – the RMT’s struggle against driver-only operation, the Royal Mail dispute and the University and Colleges Union pensions battle, as well as the PCS’s own current strike ballot on pay.

“This is in many ways the most important membership ballot in our 20-year history,” Chris said. “The government doesn’t think we can achieve the 50% threshold. But their approach has generated an unprecedented level of activity in our union.”

Rob Williams, chair of the NSSN, discussed the potential role of the trade unions in social struggles on all kinds of issues, such as defending the NHS and stopping the far right, saying “the unions should be central to those struggles.”

Rob called for everyone attending the conference to help build for the NSSN’s lobby of the TUC congress in Manchester on 9 September. This will be “saying to the TUC ‘we’ve got a militant strategy and we want you to take it up, but if you don’t we’ll put it forward ourselves.'”

President of the RMT transport workers’ union Sean Hoyle agreed: “The NSSN could be the ones to say to the trade unions ‘if the TUC don’t do it, we will.'” 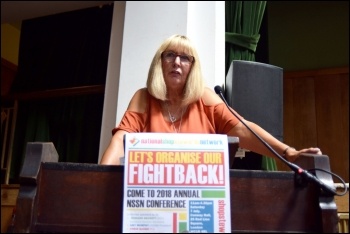 An excellent discussion followed these top-table contributions. Several speakers expanded on Rob’s point about the role of the trade unions in combatting the far right and reaching out to migrant workers. For example, Hugo Pierre, Unison national executive committee (personal capacity), spoke about victories won by his union fighting for migrants’ right to work, a point echoed by Lawanya of the Refugee Rights campaign.

Other campaigns in need of solidarity from the unions were raised too, such as the need to highlight the cruelty of the government’s benefit cuts. Theo from Socialist Students and Leicester school student Bethany both talked about organising for the protests against Donald Trump’s UK visit and the need for young people and older workers to fight together.

Dave Byrom spoke about another recent NHS victory – against ‘wholly owned subsidiaries’ in Mid Yorkshire where a successful strike ballot forced the bosses to think again. He said: coordinated action works – that’s been shown at local level time and time again. Nationally we could immediately ballot all branches threatened with wholly owned subsidiaries.”

Many speakers expressed thanks to the NSSN for support in particular disputes and workplaces – from recycling workers in Hull to housing workers, to teachers and lecturers.

Moe, one of several London bus drivers attending the conference, explained why he had initiated the motion that led to Unite affiliating to the NSSN. “I came to NSSN conference and listening to it gave me a big boost in confidence.”

A stand-out contribution to the meeting came from Richard, a ‘McStriker’ from Watford. “Working in McDonald’s really is as shitty as people say.” He contrasted his own living conditions – 26 years old and unable to afford to leave his parents’ home – with that of fellow ‘Watford lad’ Steve Easterbrook, CEO of McDonald’s, who lives in a mansion in the US and uses a private jet to get around.

“On 1 May me and my colleagues went on strike and for the first time took some of the power back from McDonald’s… I’ve just had my first taste of fighting back and I’m hungry for more.”

This will be the experience of an increasing number of workers – young and old alike – as more and more are forced to struggle for their jobs, pay, terms and conditions. As Howard Beckett said in his introduction, “there is power in the unions – and it’s time for us to use it.”