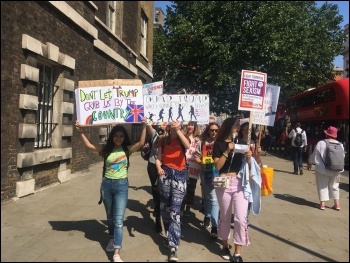 "We can't expect young people to be automatically sympathetic to capitalism" when they can't afford to buy a house, declared leading Tory Boris Johnson recently.

Despite the capitalist media largely refusing to mention socialism - unless it is to attack it in frenzied terms - growing numbers of young people are starting to investigate socialist ideas.

After Novara Media editor Ash Sarkar, under attack from right-wing presenter Piers Morgan, hit back by saying, "I'm literally a communist you idiot", the clip was viewed over 800,000 times on YouTube alone.

Meanwhile a tiny minority at the top of society have seen their wealth increase astronomically. Of the global wealth generated in 2017, 82% went to the wealthiest 1%. And the majority of that went to the 'elite of the elite' - the 0.1%.

These 'masters of the universe' own unimaginable wealth for presiding over a system that is no longer capable of taking society forward.

Those crumbs - including a comprehensive NHS free at the point of use - are now under threat as the increasingly parasitic capitalist class increases its profits via the relentless driving down of the wages and conditions of working class people and the destruction of public services.

This does not mean we are powerless to fight back. On the contrary, the working class is potentially a very powerful force - a majority in a country like Britain - that, if it acts collectively, can defeat the attacks it faces and win concessions. Twenty-first century capitalism, however, means we are under constant attack.

At the same time, the capitalists' levels of investment are at historic lows, as their lack of confidence in their own system leads them to sit on their piles of cash rather than use them to develop industry.

The result is that, for many, Jeremy Corbyn's election as Labour leader has been a revelation.

Discussion on university campuses about concepts like "fully automated luxury communism" reflects the huge contradiction between the enormous wealth, science and technology created by capitalism and its inability to meet people's needs.

Digital technology is used to send us back to the Victorian era with zero-hour workers waiting for their app to tell them if they have a few hours' work - no different to their great-grandparents queuing on the docks in the hope of being picked for a few hours' work.

New technology will never result in it evolving into a fair system. Only by taking the major corporations and banks which dominate the economy into democratic public ownership would it be possible to harness the new technology capitalism has created to meet peoples' needs.

Any government carrying out such a policy would need to have an international perspective, collaborating with the workers' movement in other countries to develop socialist planning at an international level.