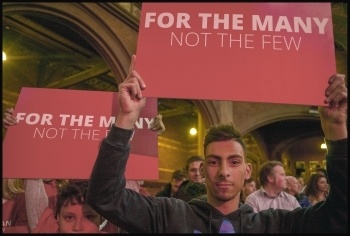 On 8 June, young people helped generate an earthquake in British politics. We massed at rallies, queued at polling stations, organised our friends and turned out in our thousands for campaign days.

We showed the establishment that far from responding with apathy, when given the chance to vote for an alternative - for the politics of hope - young people will not be found wanting in energy, enthusiasm and determination.

Free education, an end to zero-hour contracts, a £10 an hour minimum wage, nationalisation, house building, votes at 16. These were just a few of the socialist policies that helped generate such a tidal wave of support for Corbyn. It should be no surprise that more than two thirds of young voters backed him.

Theresa May has emerged from this election without a shred of legitimacy. 'Strong and stable' has morphed into weak and chaotic. She has absolutely no mandate for her government of the 1%.

Over the last month, the horrific events at Grenfell Tower have revealed even more clearly the grotesque callousness of the Tories and the capitalist system they represent.

Now, by joining up with reactionary, sectarian DUP MPs, May is attempting to cling to power in order to save the capitalist establishment from a Corbyn-led government that would threaten its interests.

But this will be a coalition of chaos. It can be stopped. And young people can play an important part in this. This means being organised to take on the Tories. It means being out on the streets. It means having mass rallies, demonstrations, walkouts and occupations to continue to fight for free education, £10 an hour and more.

But it also means getting organised to fight for socialist ideas, for a real alternative. That includes not only the fight against Theresa May and her government, but also the Blairites and the saboteurs who, until just a few days ago, were claiming Corbyn's left politics were unpopular and would render Labour unelectable.

In a similar way to the Bernie Sanders campaign in America, this election has shown that our generation is discovering socialist ideas afresh. It has expressed the huge appetite that exists for change. But now we need to be organised.

That's why members of Socialist Students, Youth Fight for Jobs and the Socialist Party have decided to launch 'Young Socialists' or 'Generation Socialist'.

We want to bring together the young people who've been at the heart of the movement to support Corbyn and who are eager to learn about and fight for socialist ideas. Join us and help us to continue the fightback today.