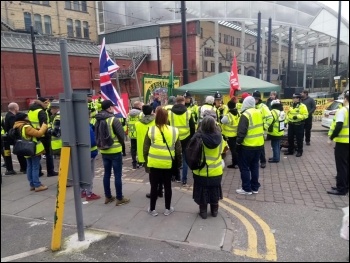 "In response to this attack we have organised a solidarity protest at Manchester Victoria on 12 January at 8am. We believe that the trade union movement should be at the forefront of the fight against the far right and are proud to support the RMT's fight to keep guards on the train. We urge all trade unionists who are able to attend to take their union banners along to the protest".