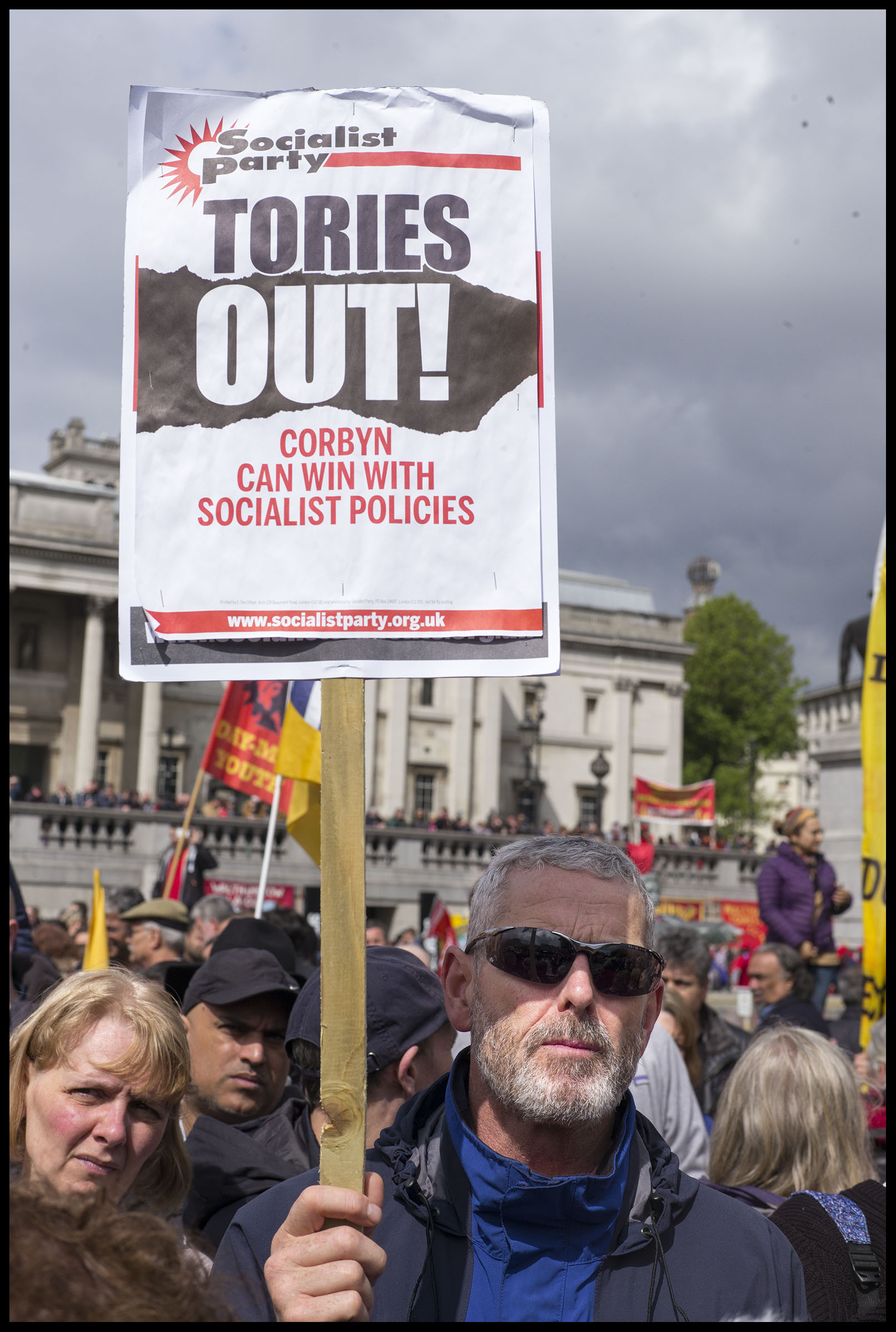 And then there were two. The Tories are entering the final stage of their leadership contest, with the choice between Johnson, the want-to-be British Trump and Hunt, the NHS wrecker. Given this crisis, once again it is no accident that new attacks are directed at Jeremy Corbyn. It has become a well-rehearsed practice – if the Tories are in trouble, news stories emerge about Corbyn, usually initiated by the Blairites at the behest of the capitalist establishment.

The latest claims over the weekend from ‘anonymous’ senior civil servants, are that he is not physically or mentally well enough to be prime minister. This comes on the back of 160 Labour Party peers and MPs signing a letter opposing the party’s national executive committee decision to end left-wing MP Chris Williamson’s suspension from Labour over false claims of antisemitism, many calling for Corbyn to withdraw the parliamentary whip from Williamson.

Both these incidents should set the alarm bells off and must put all those who support Jeremy Corbyn’s leadership on a war-footing. It is clear that the Blairites are marshalling their forces, not necessarily for an immediate move but to prepare the ground to try again to force Corbyn out and restore Labour as a pliant tool in the hands of big business.

The allegations from ‘senior civil servants’ is a reminder of how far down the sinister road of dirty tricks the upper echelons of society will go in order to maintain the status quo when they believe that their class interests are at stake. In November 2015, just two months after Corbyn’s election as Labour leader, the head of the armed forces General Sir Nicholas Houghton publicly criticised him.

It is an echo of the underhand measures that were used against Labour Prime Minister Harold Wilson in the 1970s, which included smear campaigns allegedly initiated by MI5 and even coup plots. That was a period of intense class struggle as the post-war boom ended. Labour was propelled into power after waves of strike action against the employers and the Tory government of Heath.

The ruling class then were concerned that given the intensity of the class divide, Labour may not be able to control workers and act in their interests. The forerunners of the Socialist Party, the Militant Tendency, was a key Marxist element in the struggle to push Labour left at this stage.

Similarly now, the establishment are wary of a Jeremy Corbyn-led Labour government. The ‘Corbyn surge’ that developed at the 2017 general election because of the Labour manifesto, the most radical for decades – of re-nationalisation, abolishing tuition fees, £10-an-hour minimum wage – has reinforced their view that such a government would be an unreliable tool for them. They fear the effect that a Corbyn administration could have on the working-class, raising their horizons and pushing such a government further to the left. They will reflect that in these circumstances, closures such as Swindon Honda and Ford Bridgend as well as the insolvency at British Steel would be met with workers’ demands that these plants would be nationalised by Labour.

The Blairites, led by Tom Watson share the ruling class’s view of Corbyn and act as their agents inside Labour. They see the case of Chris Williamson and particularly Brexit as opportunities to challenge Corbyn. They want to test his resolve, which unfortunately has often been lacking. The Blairites are well aware that a new pre-general election period of trigger ballots for all Labour MPs has opened up. The Socialist Party has campaigned for the re-introduction of mandatory reselection and successfully won the position in general union Unite’s policy conference. This has not been agreed by Labour. However, the rule change that was passed at the 2018 Labour Party conference has made the ‘trigger’ process for reselection contests easier to enact. A sign of the Labour right’s concern is that Tom Watson’s ‘Future Britain Group’ organised a recent seminar to help incumbent MPs to avoid being deselected.

It is therefore a scandal that Momentum leader Jon Lansman has supported the moves against Chris Williamson. Similarly, it is a serious mistake for others on the left, including John McDonnell if as reported he is pushing for Labour to take a Remain position. As union leaders such as Len McCluskey, Unite, and Dave Ward, Communication Workers Union, have argued, the most important ‘Peoples Vote’ is a general election to get rid of all the Tories, which Corbyn and the unions must mobilise their members to fight for.

If Jeremy Corbyn and the union leaders openly campaigned for an election on a socialist manifesto it would offer the chance to unite workers on both sides of the Brexit divide. Policies on public ownership of Royal Mail and the railways and if extended to the likes of British Steel would come up against the neo-liberal rules of the EU and expose its anti-worker character.

This was revealed by pro-Remain economist Martin Wolf in the Financial Times: “It is correct that if the UK left the EU completely, it could abandon an active competition policy and waste large amounts of money in propping up failed companies. Why it should view either as attractive is a mystery.” (‘The Brexit delusion of taking back control’ March 26 2019). Tell that to 4,000 steelworkers facing the sack in Scunthorpe on just statutory redundancy of a maximum of £15,000! With this approach, Corbyn could totally transform the perception many workers have of him and cut the ground from underneath the Blairites and their big business backers.

The class lines are being drawn. Even before an election, the Blairites are intent on destabilising Corbyn’s leadership. Behind them stand the Tories and the whole capitalist establishment, including the heads of the civil services and armed forces, the media and the judiciary. Their intervention is a warning of how they will try to frustrate a democratically elected left government.

But the organised working-class is still potentially the most powerful force in society, providing they are mobilised behind a socialist programme that can replace diseased capitalism and offer a way forward for the majority in society.