"I'm glad they convinced him to put it down in print" 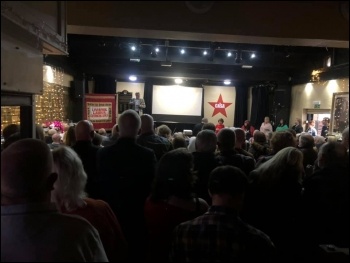 I wasn't able to go to the launch of Tony Mulhearn's book, The Making of a Liverpool Militant, but my copy arrived in the post a couple of days before, so I spent a lot of time reading it.

So what did I think?

It's great! It's written in an engaging style that draws you in. You want to keep reading without stopping.

That is a product both of how it's written, but also Tony's life and experiences. I'm glad friends and comrades convinced him to put it down in print.

The cover shows photos from the great battles against Thatcher with the socialist-led Liverpool Council. There Tony played a crucial role as president of the District Labour Party, a gathering of delegates representing the spectrum of labour and trade union organisations in Liverpool.

They discussed and debated the strategy and policies the 1983-87 Labour council adopted, winning back tens of millions of pounds for the city. That was invested into building new council housing, parks, nurseries, and to create jobs.

This is of course covered in the book, but Tony refers to 'Liverpool: a city that dared to fight' to flesh out some of the finer details. In The Making of a Liverpool Militant, he concentrates more on the debates around the strategy they adopted.

This aspect is most valuable about the book - it doesn't just cover the mighty events around the council, but Tony's experiences as a trade union activist, which may be less familiar to some readers.

Tony was a trade union rep in many different unions from father of the chapel (branch secretary) of a print works in the National Graphical Association to a call centre worker and Communication Workers' Union member later in life.

These are a real school for how to get a feel for the mood of the workforce, and develop a fighting stance to take on management. For any current or aspiring trade unionist, these chapters on their own are worth reading the book for.

Sadly, given his recent passing, I won't be able to send my compliments on to Tony. But, a revolutionary socialist party is the memory of the working class - to arm it for future struggles.

By producing this book, Tony has helped preserve the valuable lessons of the important struggles he was a leading participant in. Let us utilise these lessons in the even bigger class battles that are coming to truly continue his legacy.

Hundreds packed into the big room at the Casa pub in Liverpool, the venue of the Socialist Party's weekly meetings, for the launch of the late Tony Mulhearn's autobiography - The Making of a Liverpool Militant - just days after his sad passing.

The room was overflowing. There wasn't even standing space left!

A film of Tony's life was shown and an array of speakers included Unite general secretary Len McCluskey, Derek Hatton and Dave Nellist. Len Mcluskey remembered his years on Merseyside and encouraged the audience to read Tony's other major publication - Liverpool: A City that Dared to Fight, written with Peter Taaffe, Socialist Party general secretary.

Derek Hatton - deputy leader of Liverpool's socialist council in the 1980s - said that Militant, relaunched as the Socialist Party since 1997, provided a political strategy that was essential to the anti-cuts struggle in Liverpool.

Former Militant Labour MP, Dave Nellist, spoke on behalf of the Socialist Party. He praised Tony's lifelong contribution to the fight for socialism, saying he had remained a Socialist Party member until the end.

Socialist Party members from across the country joined the event. The Socialist, with a short obituary for Tony by Peter Taaffe, was widely sold and a leaflet distributed.