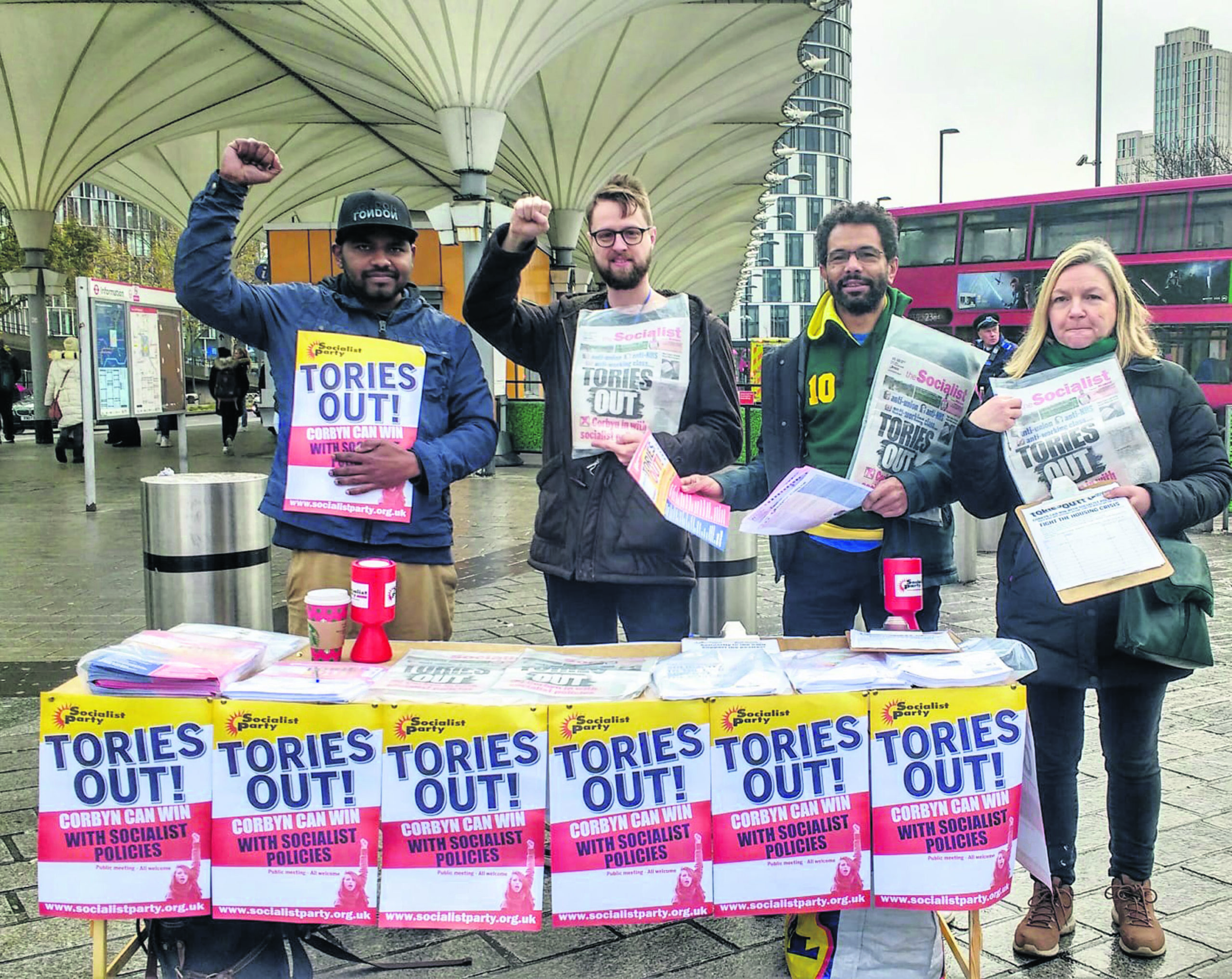 On Tyneside, Corbyn’s election manifesto has begun to filter through. We’ve been saying, for what seems like forever, that the mood against Corbyn can change, and this is clearly beginning to happen.

People we spoke to like that Corbyn has pledged to scrap Universal Credit, build council houses, and renationalise the NHS. They told us to look out for Corbyn’s 60-second video clip explaining his headline policies. Many wanted to know more about his policies. What was he saying about the anti-union laws? Did we think he would keep his promises?

We spoke to an ex-soldier now working for the NHS. After serving in Afghanistan he’d ended up on the streets of London for seven months. Initially he was uncertain what to do in the election, but was very responsive to our analysis and the need for change – particularly on council housing.

Because of heavy rain we were only out for just under an hour, but even as we were packing up people were coming up to talk to us. We sold eight copies of the Socialist. We could have sold more, but many people were on or over the edge of poverty.

With socialist policies it’s beginning to feel that Corbyn can win.

Less people were hostile to the election and all that it represents in the last few days in Leyton, east London. It’s neutered the opposition to Corbyn.

More people engaged with us, and among a layer the manifesto is filtering through. We sold 16 copies of the Socialist, and met at least one person interested in joining the Socialist Party.

Dispassionate responses could signify a deep, silent mood that will sullenly come out on 12 December and vote for Corbyn’s manifesto – but saying ‘now you must prove it to us’. It doesn’t yet feel the same as 2017, when the novelty of a pro-worker manifesto itself inspired a layer to believe in it.

This could change. It could morph into wild enthusiasm; anything could happen. It’s stirring, but not shaken up yet, on the mean streets of Leyton.

The Labour Party manifesto says “it’s time for real change,” and this was reflected in discussions at Southampton Socialist Party’s stall on 23 November. We also definitely saw a distinct thaw in the hostility from those opposed to Corbyn.

We met people who were keen to talk about the anti-austerity policies in the manifesto. This was having a positive effect on many of them.

It resulted in a possible Tory voter saying they needed to reconsider, and they left with a copy of the Socialist newspaper. An undecided voter was persuaded to be a definite for Corbyn. And someone who said they were a socialist but had been inactive for years wanted to hear more at one of our meetings.

Swansea was wet and windy yet again on 23 November, which inevitably had an impact, but we sold 21 copies of the Socialist.

Younger people we meet are more positive about the manifesto pledges on the minimum wage, scrapping zero-hour contacts and abolishing tuition fees, as well as the commitments on housing and rent controls.

However, there is still a widespread mood of indifference towards politicians and ‘a plague on all your houses’. A minority are vocally abusive towards both Johnson and Corbyn. The experience of the main parties’ manoeuvres against Brexit is always in the background.

We haven’t yet felt the mood of excitement and enthusiasm which was around after Labour’s 2017 manifesto leak. But that can still change in the last weeks.

We sold six copies of the Socialist in an hour in Leeds on 23 November, campaigning in support of the postal workers, renationalising Royal Mail, and defending the right to strike.

Many of those stopping were unaware that the recent strike had been blocked by an unelected judge. They backed the posties and signed our petition in support of the CWU. One postal worker stopped at the stall and told us he wanted a Jeremy Corbyn government and “everything renationalised.”

The mood was mixed in regard to the election, with a number of conversations about the recent TV debates.

One person who was hostile to Corbyn told us they were supporting Boris Johnson on the basis he was “funny” and wanted to “invest in the NHS and the police.” They were shocked when we highlighted Johnson’s record of cuts to public services. 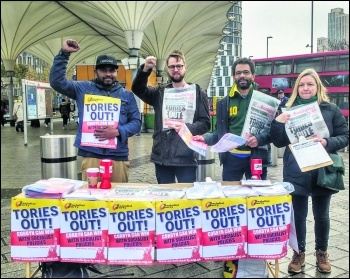 Socialist Party campaigning to get the Tories out and Corbyn in with socialist policies, photo Socialist Party   (Click to enlarge: opens in new window)

Jeremy Corbyn’s most far-reaching anti-austerity manifesto has started to have some effect. In Stratford, east London, people normally keep their heads down.

But we sold six copies of the Socialist on 23 November, and met three people who wanted to find out about getting involved with the Socialist Party. People liked our explanation of how and why Corbyn must go further to get his policies implemented.

However, because Corbyn has appeared quiet and indecisive until the manifesto, right-wing propaganda about terrorism and antisemitism resonated among some workers, especially the most downtrodden.

In Lewisham, south London, there was lots of support for Corbyn on 23 November. We sold 16 copies of the Socialist.

Zara, a young mother with a child, said: “Corbyn knows what he is doing. He is up against the elite who run things. I am scared to death with what they are doing to the NHS. My kids need decent schools.”

Liverpool Socialist Party campaigned on the NHS on 23 November, particularly focusing on threats to the local women’s hospital and walk-in centres. Many were keen to sign the petition, voicing concerns at the current run-down state of the NHS, and worries about its wholesale privatisation should the Tories win the general election.

The Labour Party had just launched its election manifesto. This was raised in conversation by a few people who visited the stall. Generally supportive, although “where’s the money coming from?” was a question put by a couple of people. We sold several copies of the Socialist, and received over £30 in donations.