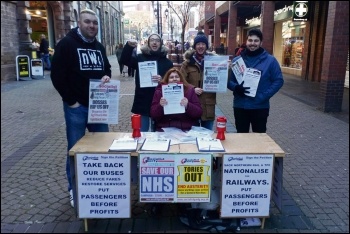 I am a public transport commuter, and to say there has been a steady decline in services over the past three years would be an understatement.

I catch a minimum of 15 buses a week and have to report at least two a week that don't turn up.

The biggest change came after First Bus closed down their local Rotherham depot, to save money, and started running all their from the Sheffield depot, in another city, eight miles away.

I also catch five trains a week between Sheffield and Rotherham, run by 'Northern Fail'. These are late on a regular basis.

For this reason, and hearing similar complaints daily from fellow commuters, our Socialist Party branch decided to start a campaign about public transport.

The Sheffield City Region Mayor, Barnsley Blairite MP Dan Jarvis, has powers to introduce bus regulation under a franchise model like Transport for London, and is currently consulting about options to improve services.

We did a campaign stall outside Rotherham Interchange with a petition supporting regulation of buses as a step towards public ownership and for nationalisation of rail services.

This could increase punctuality and reduce fares which otherwise will keep increasing.

The stall was very successful, especially when we started saying: "If you think bus and rail services are crap, sign our petition to take them back."

We collected near to 100 signatures and a good amount of donations for the Socialist Party fighting fund.

What struck me most was the number of elderly passengers affected by bus service removals.

One woman explained that she now has to walk for half an hour after two of her services had been cut. Doing so had caused her to have a bad fall, breaking bones.

The actions of these profiteering companies have direct consequences on people's lives. They neither realise nor care about this as long as the shareholders are in pocket.

We say take them back.