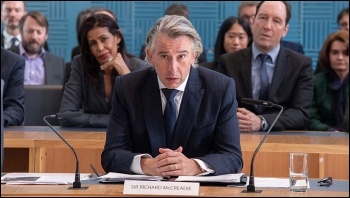 Steve Coogan as Philip Green in Greed   (Click to enlarge)

It was refreshing to watch a mainstream film exposing the madness and exploitative nature of the capitalist system.

'Greed' is an apt title for this film which, presumably, is based on the career of Philip Green, most infamously remembered for finalising his purchase of a £100 million super-yacht on the same day as BHS employees found out that they were losing their pensions! (In the film Greedy McCreadie's wife states that cost did not cover the interior design).

The film portrays Greedy McCreadie as a bully with no knowledge of the fashion industry, but who negotiated rock bottom prices for clothing, thereby exploiting the already poorly paid female machinists in developing countries, pressuring them to work faster in order to maintain the profits of their factory owners.

In one scene of the film a fire breaks out in a factory, a reminder of disasters that have occurred in recent years, (notably the Rana Plaza garment factory near Dhaka which collapsed killing over 1,000 people).

The sharp business practices that seem absurd to working people, but are apparently perfectly normal and legitimate under capitalism, are also explained. Greedy McCreadie used the assets of a company he did not own to buy that very same company. He did this using very little of his own money, asset stripping the companies and running them into the ground, leaving employees jobless. His wife lived in Monaco and, as everything was in her name, avoided paying any tax.

The film switches to different times in Greedy McCreadie's life, but the central theme is the preparation for his 60th birthday celebration at his home on a Greek island. An important subplot is the presence of refugees living in tents on the beach which could be seen from his luxurious accommodation. I feel this contrast could have been developed further in the film, though it did draw attention to the lavish lifestyle of a fashion mogul and the plight of homeless refugees.

The facts presented at the end of the film highlight the exploitation of women in the fashion industry. In Myanmar women machinists earn the equivalent of €3.30 a day and in Bangladesh €2.60 daily. This is compared to the obscene profits made by fashion companies. (I have read that Sony Pictures International would not allow individual brands and millionaires to be named as they didn't want to damage relationships with them.)

However, the information clearly illustrated the massive inequalities under capitalism. One fact stated: "The richest 26 men own as much wealth as the 3.8 billion poorest people."