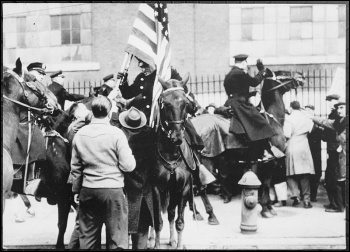 Victory in Europe had come at an enormous cost. 40 million soldiers and civilians had been killed, 27.5 million in the Soviet Union alone. The German ruling class's gamble with fascism had resulted in much of eastern Europe coming under the influence of the USSR, with capitalism and landlordism being swept away there.

In the West, capitalist industry was on its knees - crippled by the burden and destruction of the war. Throughout Europe, mass migrations of demobbed soldiers, workers and refugees were creating political instability. Everywhere there were food shortages, unemployment, homelessness and poverty.

But as the Allies advanced into Germany they frequently found factories and mines taken over by committees of workers who had driven out SS saboteurs. The first act of the Allies was to ban these anti-fascist organisations!

Nonetheless, the power of the workers' committees meant that the demand for nationalisation of the mines and other war industries became widespread. For example, in 1946 in Hesse, Western Germany, 72% approved of the socialisation of industry in a referendum. A shocked US commander Clay vetoed it!

However, the resurrected German communists (KPD) and social-democratic parties lagged behind workers' demands by only calling for partial nationalisation of industries, while both called for a renewal of capitalism.

In 1947 a strike wave took place in the industrialised Ruhr area of Germany which included demands for nationalisation of industry. At its height, 350,000 workers were on strike. The US occupiers, in response, threatened to cut food rations and to impose martial law.

The Allies' situation was saved by the trade union leaders and KPD leaders who restrained the workers from taking action. Improved food supplies, an end to the dismantling of industry, and the establishment by the occupying authorities of 'works councils' to address workers' wages and conditions, gradually eased the conflict.

In France and Italy, the dying days of the war witnessed massive strike waves by a working class growing in confidence of its power. This was to be a major problem for the Allied occupation.

In late 1943, after Mussolini's removal, the Italian workers in the industrialised north, still under the control of the German army, organised strikes and a 15,000-strong armed resistance movement.

In March 1944, one million workers struck in the occupied north. In Milan, the bosses were forced to pay the workers for the days on strike!

Liberation in 1945 left communist and socialist workers dictating to the capitalists the terms and conditions of employment. Perhaps as many as two million workers joined the Communist Party.

Likewise in France, 50,000 Parisians - arms in hands - drove out the German occupiers forcing the Allies to rush General Charles de Gaulle into the liberated city to head off a new Paris commune (the 1871 workers' uprising).

The Resistance movement published a charter demanding nationalisation of the capitalist monopolies. In many regions, this demand was implemented with many companies being run by workers' committees.

In the first elections in France in October 1945, the Communists won 26.1% of the vote and the socialists 23.8% - a near majority. Moreover, for the first time, a majority of workers were organised in trade unions.

The capitalists' fears, following the collapse of the Nazi regimes, were summed up by the Economist magazine (1 December 1945):

"The collapse of that New Order imparted a great revolutionary momentum to Europe. It stimulated all the vague and confused but nevertheless radical and socialist impulses of the masses. Significantly every programme with which the various Resistance groups throughout Europe emerged from the underground contained demands for nationalisation of the banks and large-scale industries; and these programmes bore the signatures of Christian Democrats as well as of socialists and communists" (Quoted in Capitalism since World War II by Andrew Glyn et al).

In the victorious countries of Britain and the USA, the working class demanded its reward for defeating fascism. Above all, there was a widespread mood that there should be no return to the poverty and unemployment that characterised capitalism between the two wars.

In the US the trade unions embarked on a massive strike wave for better wages and conditions in 1946.

In Britain, the Attlee Labour government was swept into office and established a welfare state and carried through the nationalisation of basic industries. But, generally, it was only the investment-starved, near-bankrupt companies that were taken over.

The weakened capitalist class would not have been able to seriously resist widespread public ownership measures but the Labour and trade union leaders had no intention of challenging capitalism.

Stalin, who controlled the communist movement, had agreed during 1944-45 with Churchill and Roosevelt to co-exist with imperialism and to divide conquered Europe into Western and Soviet 'spheres of influence'.

This counter-revolutionary arrangement was to last until the fall of Stalinism in the USSR and eastern Europe between 1989-91.

In France, despite the weakness of the capitalist class and the enormous strength of the Communist Party (PCF), no revolution took place. Instead, the PCF participated in a 'government of national unity' which ruthlessly pursued an imperialist policy in Indo-China (Vietnam), Algeria, Madagascar and elsewhere.

In 1947, US imperialism, now a superpower, (British imperialism was bankrupt and faced colonial revolutions in its decaying empire) sought to undermine revolution in Western Europe by imposing stability through the Marshall Aid recovery programme.

The right-wing leaders of the British and US labour movement were also mobilised in defence of capitalism in Europe. The British TUC, for example, persuaded the German trade union leaders to take measures to prevent communist influence.

Eventually, the revolutionary wave in Europe exhausted itself, blocked by the political leadership of the workers' organisations who acted as transmission belts for the policies of either imperialism or Stalinism.

In Western Europe, the ruling classes could not, following the collapse of the Nazi and fascist regimes, use widespread repression against the working classes to ensure the continuation of capitalism.

Instead, they relied upon the pro-capitalist leaders of the workers' movement, who argued that socialism should be "postponed", to resist the popular demands for socialism and gradually stabilise the capitalist system.