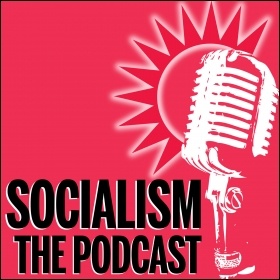 Socialism is available on all major podcast platforms. Click the link below to visit and subscribe to Socialism’s channel on your podcast service…

Capitalist commentators often refer to the 1970s as a kind of dark age, and accuse socialists of wanting to return to it. What they’re frightened of is the huge power of a working class that fought and often won during that decade.

One major victory was the defeat of the Tories’ 1971 Industrial Relations Act, an attempt to smash the power of shopfloor union reps. Unofficial strikes and mass resistance made the act unenforceable.

Why did workers have such power in the 1970s? Can that be replicated? What was behind the bosses’ attacks on their wages and conditions? And can the anti-union laws that shackle workers today be overcome?

The Socialist Party’s black and Asian group has produced a new charter proposing some key demands in this fight.

This episode of Socialism looks at the struggle against racism: a black workers’ charter.

While working-class Russians suffer ever more misery, Putin has built himself an opulent private palace. The anger against him is enormous. But although Navalny has exposed the kleptocracy’s massive corruption, his vision is limited to a more democratic capitalism.

Workers should have greater democratic rights. But would this alone solve their problems? Is it even achievable with capitalism in crisis? And what sort of programme and organisation does Russia’s working class need to end both dictatorship and poverty?

This episode of Socialism, taken from a broadcast by the Committee for a Workers’ International on 11 February 2021, looks at the Russia protests: what future for Putin’s regime?

During the pandemic, educators and support staff have been on the front line of the Tories’ war for private wealth over public health. Schools became key breeding grounds for Covid-19.

How can teachers reduce their staggering workload? Is there an alternative to Britain’s ‘exam factory’ education system? What is the way to reverse devastating cuts and privatisation?

What are the 2011 Arab Spring’s lessons for now?

World capitalist governments were taken by surprise. Why did Marxists in the Committee for a Workers’ International foresee that uprisings were coming?

On Wednesday 6 January 2021, Trump supporters – some armed – invaded Congress. It was the culmination of the loose-cannon president’s desperate attempts to overturn the election result. But the US capitalist class is used to inflicting humiliations like this on the rest of the world – not losing control at home.

Was this action just a protest-turned-riot, or did it represent some kind of attempted coup? Are Trump and his movement ‘fascists’, or is the real picture more varied and chaotic?

The opposite attitudes of Capitol Hill police officers and US military chiefs show the splits in the US state machine. The big divide between Trump’s supporters and other Republicans shows splits are developing there too.

The nightmare which began in 2020 has not been limited to public health, but has infected the already-ailing world economy – with British capitalism the worst hit of all the major capitalist powers. Working-class and young people have already suffered hugely as the bosses try to pass on the pain. The bare-bones Brexit deal will only make things worse for Britain’s capitalist rulers.

Boris Johnson’s Tory government has been completely exposed for its incompetence and craven defence of profit over lives. But Keir Starmer’s Labour offers no opposition whatsoever. Britain’s working class has no political voice – and desperately needs to build for a new, independent, mass workers’ party.

Already this year, the trade unions have overturned the government by forcing part-closure of schools. And young people showed they are ready to explode in protest in last year’s Black Lives Matter movement.

What do young people need today – and how can they fight for it?

Last summer, massive, young, working-class protests exploded around the world after the murder of George Floyd, and other appalling incidents of racism and police violence. But it’s not just these issues that angered young people.

In the US, Britain and around the world, the youth are suffering appalling conditions, and a future of crisis and uncertainty. But young people have also fought. In electoral movements – through support for figures like Jeremy Corbyn and Bernie Sanders. And on the streets – in the global climate strikes, and last year’s huge, young and working-class uprisings under the slogan of ‘Black Lives Matter’.

Even before the pandemic, wages were low, jobs insecure, housing and education unaffordable – and tomorrow promised nothing but economic and social turmoil, and even climate catastrophe. In 2020, the pandemic multiplied all these problems, as the capitalists and their politicians dumped the burden disproportionately on the working class and youth. Young people on the streets were angry about racism, but they were also angry about all of it.

In the run-up to last year’s election, the United States was faced with a litany of crises. This episode was recorded during the run-up – but Biden’s election changes little.

The capitalists were facing these crises with an unreliable representative at the helm: Donald Trump. But they were breathing a bit easier once Bernie Sanders, who came to prominence with his promise of a “political revolution” against the “billionaire class,” endorsed a more reliable representative of big business interests in the form of the Democrat Joe Biden.

Biden narrowly defeated Trump. But the problems faced by “Sleepy Joe’s” administration have no solution on the basis of the capitalist system that both he and Trump defend.