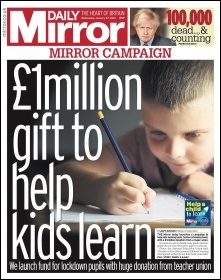 Thousands of National Education Union (NEU) members tuned in on 26 January to listen for the surprise 'big announcement' that they had been told to expect from their union.

Expectations had been raised, not least that this might be another morale-boosting call from the top of the union to build the collective action needed to defend school and community safety. It was, after all, taking place on the grim day when the official UK Covid death toll had exceeded 100,000.

The news that this was actually about a £1 million donation from the NEU to launch the "help a child to learn" appeal, has had quite a mixed reception. Some lessons certainly need to be learned for the future.

Every NEU member will share the union's determination to tackle child poverty, will be angry at the government's failure to support children and families working at home during lockdown, and will want to make sure that those hurt most by those failures are not left without the resources they need.

But a decision to spend £1 million should not be launched on members as if they were just part of an audience to a publicity stunt. Prior consultation should have taken place through our union structures.

Emails asking members to donate to the appeal themselves need to recognise that some recipients will be struggling to pay their rents and bills. Members and their families have also been hit by the pay freeze, job cuts and furlough.

Additional funds could have been prioritised for supporting districts in organising the campaigns and industrial action needed to win both our education recovery plan and NEU demands to defend safety and workload. After all, a union is, first and foremost, an organisation that uses its collective strength to insist the government changes its damaging policies, rather than having to step in to substitute for those failures.

The NEU's education recovery plan's call for internet access, free laptops, additional spaces and staffing to allow education to take place in safe environments, and for free school meals throughout the holidays are all vital - and should have had far greater billing. But we should go further.

What about demanding free broadband, for the scrapping of Universal Credit and its replacement with benefits that reflect the true cost of living? For investment in the building of council homes, education and the health service? What about pointing out where the real wealth in society is to be found and how it should be used to benefit the majority, not hoarded by a wealthy minority at our expense?

Nevertheless, given the dire circumstances school staff know exist in our communities, many members will recognise that, alongside our main role of demanding change, we may also have to step in and try and meet some of those urgent needs ourselves. However, if that's felt to be necessary, then why would a union do so through a partnership with the Daily Mirror and a major office supplies company, Viking?

This is not how union funds should be allocated. We should be linking up with schools and local authorities, with food banks and other local organisations who understand pressing local needs and who can build a real network of solidarity, rather than funds being managed through an office supplies company!

NEU donations to support emergency social solidarity must be built alongside a clear campaign to demand the government acts to deliver the funding and policies really needed to address inequality - and that is the priority for our union.

Sadly, the 'big announcement' has been packaged more like a PR exercise. Unions don't build mass backing through PR, but, first and foremost, by boldly explaining their demands to their members, to other trade unionists and to the communities they serve. That's how the NEU must build its support - and how we can work together to win real and lasting change.