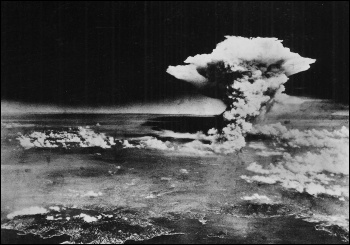 Although conventional bombs in a single attack had also killed tens of thousands of civilians - in Dresden and Tokyo for example - the use of the atomic bomb was far more destructive and deadly than any other weapon used in the war. It ushered in the era of nuclear proliferation.

At the time, when the atomic bomb was dropped over Japan, Nazi Germany had already been defeated. Stalin's Soviet Union - at enormous cost to its oppressed population, and despite the treacherous mistakes of its bureaucratic leadership - had played a crucial role in the defeat of Hitler's regime. The Soviet Union had recently declared war on Japan and invaded its northern islands.

That the Soviet Union was expanding beyond its agreed 'spheres of influence' worried the capitalist regimes in the West.

In the aftermath of World War Two, with the escalation of the conflict between the capitalist regimes on the one hand, and the Stalinist regimes, based on a bureaucratically planned, nationalised economy on the other, the number of nuclear warheads stockpiled massively increased. Given the destructiveness of these weapons, however, both the Western powers and the Soviet Union wanted to avoid a nuclear war and their 'mutually assured destruction' (MAD).

It has been 75 years since the bombing of Hiroshima and Nagasaki, and the US remains the only country to have ever used the atomic bomb. Today, not only has technology developed to an unimaginable scale compared to 1945, but eight more countries are in possession of nuclear weapons - including China, Israel, France, India, Pakistan, North Korea and the UK, while Iran has resumed its attempt to build a weapon. Currently, Russia and the US possess over 90% of the world's total nuclear warheads.

Several treaties have been signed in the past to limit the number and the range of these nuclear weapons. But US president Donald Trump withdrew from both the 1987 Intermediate-Range Nuclear Forces Treaty (INF) last year - which he accused Russia of reneging on - and also the Obama-era nuclear weapons deal with Iran.

The Trump administration views the 'Russian bear's' invasion and annexation of parts of Ukraine as a threat, notwithstanding the expansion of the US-dominated western military alliance of Nato into eastern Europe since the collapse of the Soviet Union.

The US also wants to build up its military forces against China, which didn't sign the INF. This treaty withdrawal, therefore, is a reflection of the growing competition between major capitalist powers as the global economic crisis intensifies.

Capitalist competition is leading to increased international tensions between states. The US drone attack which assassinated Iran's top general, Qassem Suleimani, earlier this year, has underlined the volatile and dangerous situation which exists in the Middle East. Iran retaliated to the assassination by carrying out a ballistic missile attack on US bases in Iraq.

Meanwhile, Stalinist North Korea remains wedded to its nuclear arms testing programme. The ratcheting-up of tensions between the US administration and North Korean regime - which reached its highest point in 2018 when the latter tested a nuclear bomb - once again underlined the fact that none of the attempts to demilitarise the Korean peninsula since the 1950-53 war have worked.

The intensifying competition between China and the US in world markets, and these super-powers' attempts to further their geopolitical aims, have already led to a trade war and an expanding militarisation of the Pacific Rim region. On top of that, the present world economic crisis has triggered a new wave of international tensions.

Although the 'MAD' consequence means that their use of nuclear weapons can be ruled out, the territorial disputes in the South China Sea are an indication that conflicts over strategic trade routes can lead to some sort of military clash.