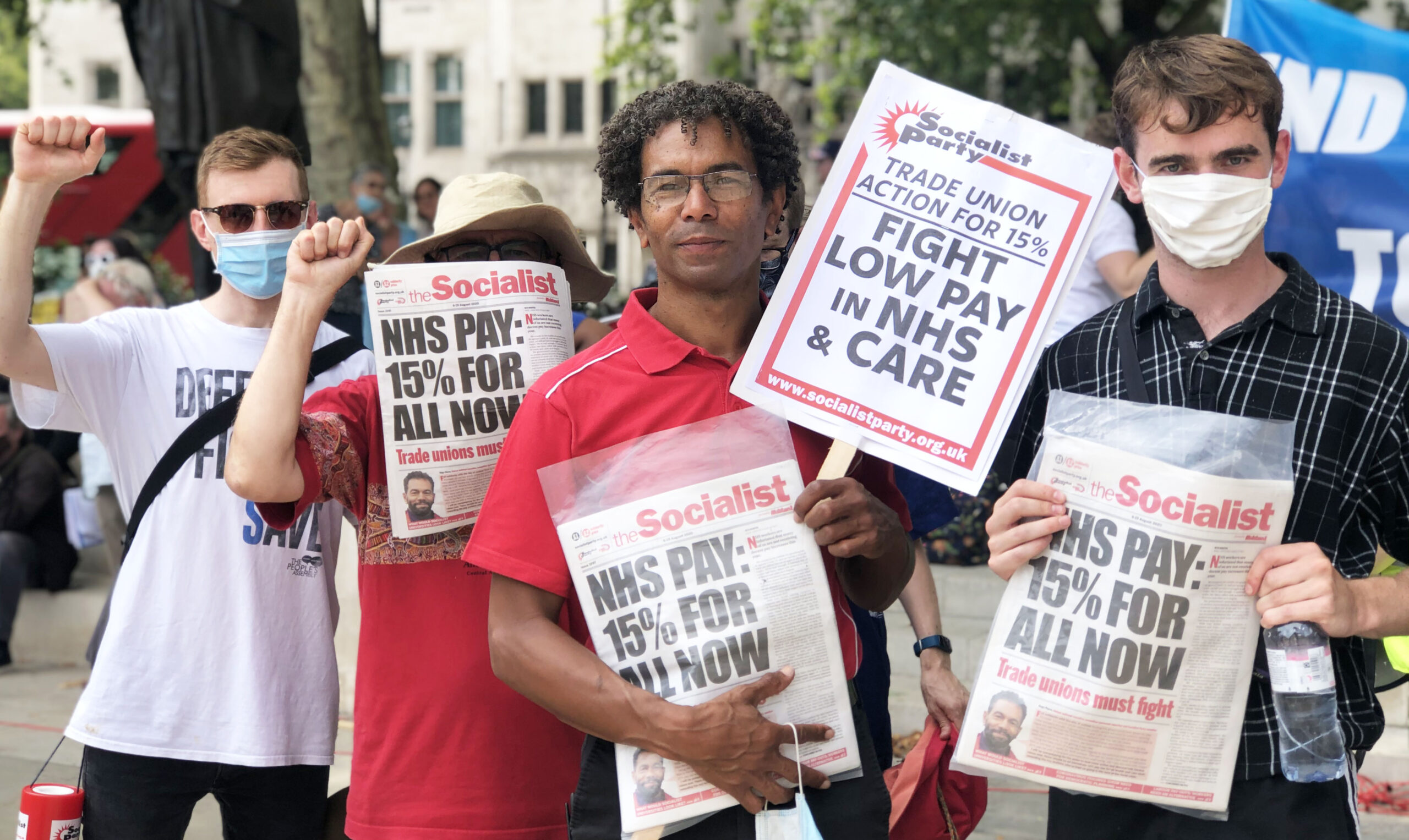 The Covid pandemic has exposed what decades of underfunding, cuts and privatisation have done to our public services. It has also revealed the failure of many trade union leaders to respond to the crisis: none more so than in the main public services union, Unison.

While Unison members were literally giving their lives daily to save others in the NHS, care homes, councils and schools, and local reps were battling with the employers on the ground, the leadership hunkered down and hid.

In addition, during the crisis the mostly unelected officialdom shut down what democracy existed in the union. So while some unions initially recognised the need to organise – the education workers’ union NEU, for example, held Zoom meetings of thousands of reps and a meeting of 20,000 union members at one point – Unison refused to call meetings to debate and plan its strategy, and even threatened disciplinary action against activists who sought to organise.

The consequences of this failure are already being felt. The pandemic starkly revealed who were the real heroines and heroes who kept us alive and the economy moving. Yet two million council workers are now to have a meagre 2.75% pay increase imposed on them, with no fight, and a million health workers are being told that there can be no more money for them.

The Unison leadership has squandered this opportunity, and failed to support attempts by members and activists to organise a fight in the health services. It has even called on branches not to support the NHS pay protests currently taking place.

There is no doubt that the government will seek to maintain the squeeze on the public sector, with councils, colleges and NHS bodies already preparing the next round of attacks on jobs and conditions.

The failures of the present union leadership make the question of the current general secretary election to replace the incumbent Dave Prentis an even more important one.

Presently there are five candidates in the election, including Socialist Party member Hugo Pierre. Two of the candidates are current unelected assistant general secretaries – Christina McAnea and Roger McKenzie – who have been part of the Prentis machine for over a decade.

During that time, neither has demonstrated the slightest opposition to the Prentis regime, despite what they are asserting now when looking for votes. In fact, they have been open supporters of ‘team Dave’ in his election campaigns.

Neither have spoken out about the disgraceful witch-hunts against socialists in the union, even when they have been proven unlawful, such as in the case of the ‘Unison Four’ Socialist Party members in 2011.

When interference by full-time London Region officials in the 2015 general secretary contest was exposed, neither of them spoke out. Roger McKenzie, who was part of team Dave’s election campaign, was seen by Prentis as a safe pair of hands to act as the investigating officer in helping to cover up and limit the damage to just one official! They may now claim that they couldn’t speak out as they were paid officials, but what faith can members have in those prepared to sit and watch such injustice and say nothing? To steal a line from the BLM demos ‘silence is compliance’.

Neither of these candidates has a plan or programme to address the crisis that members face. Neither has a strategy for taking on the government or councils, other than the failed one of leaving branches to fight alone, left isolated to be picked off one by one.

Neither has any plan or strategy for dealing with a Labour Party that is happy to take £3 million of Unison members’ money each year, while still attacking their jobs, wages and conditions; as in Tower Hamlets, where the Labour council has sacked the entire workforce to impose cuts to its terms and conditions.

Neither of them has any programme to establish genuine democracy in the union so that the members and not unelected full-time officials call the shots.

Compare that to the programme of Hugo Pierre:

Aside from Hugo, the only other lay candidate in the election is Labour Party member Paul Holmes. He stood in 2010 and came last with 28,114 votes, well behind Socialist Party member Roger Bannister’s 42,651 votes (despite Holmes receiving more nominations). Unlike Hugo Pierre, Paul Holmes has never stood in and won an all-members’ ballot across all sectors of the union. Hugo currently holds a black members’ seat on the NEC in which all 1.3 million members get to vote.

When the general secretary election was first mooted and discussed among the left, the Socialist Party said that the most important thing was to agree the programme and strategy required to transform Unison into a democratic and fighting union. On that basis, it would be possible to agree a single left candidate.

Discussions took place in the left grouping ‘UnisonAction’ (UA). UA was initiated by the Socialist Party five years ago in an attempt to build a fighting broad left organisation with widespread support in the rank and file. Unfortunately, it has not developed in this direction, and has been hampered from doing so by many of those who are now supporting Paul Holmes.

Hugo indicated to UA that he wanted to stand over a year ago and drafted his full programme for debate. Unfortunately, Paul Holmes did not contribute to that debate nor put forward a single policy position that he believed the left should stand on. In fact, in the course of over a year’s discussion, Paul did not once even indicate he wanted to stand.

It was only when Glen Williams (chair of the local government executive) withdrew his name as a prospective candidate for the left, that some Labour Party members and the Socialist Workers’ Party (SWP) panicked and desperately sought another candidate – with some demanding it had to be a Labour Party member and resigning from their positions in the UA (in a move to stand regardless, outside of the UA).

In reality, the issue of Labour Party membership was a diversion. Hugo had been a Labour Party member until his expulsion for his role in the poll tax non-payment campaign in 1990, and had been refused readmission in 2016 by right-wing Labour general secretary Iain McNicol.

Unfortunately, the central question for the small group of lefts involved in the discussion was to find an ‘anyone but the Socialist Party’ candidate. Incredibly, they had taken the same approach in five previous Unison general secretary elections, despite the Socialist Party candidate Roger Bannister beating their choice every single time!

So Paul Holmes was once again pushed forward despite his weaknesses as a candidate. These include the serious complication of him currently being suspended by his Labour council employer and the union for allegations of bullying and harassment, with those making them including female stewards in his branch. This was even accepted by the SWP, who had publicly described them in the Socialist Worker newspaper as “allegations of bullying, that should be taken seriously and investigated”.

The Socialist Party is well aware of how the right-wing union officialdom can use allegations against left activists to conduct a witch-hunt, and will oppose any attempt to do so. However, these are serious allegations and need to be treated as such.

In these circumstances it is irresponsible to put Paul Holmes forward as a left candidate. There is a real risk in the election that we could be left with no rank-and-file candidate if Hugo Pierre does not get onto the ballot paper.

Some on the left are claiming that as the UA has voted to back Paul Holmes, Hugo should accept that and withdraw from the election. This makes the mistake of not understanding what the UA currently is, and assuming there was a genuine democratic process.

Paul Holmes’s programme is also weak. While some demands are better than those put forward by the full-time officials standing, it falls far short of what is necessary to transform the union.

He does not support Hugo’s demand for Labour and SNP councils to set needs budgets and to refuse to implement Tory cuts.

He does not support Hugo’s call for the union to withhold funding from Labour politicians attacking our members and use our union funds to back candidates who support us.

He has not put forward any strategy to fight the cuts in the councils on an all-union basis, confronting the idea that you can’t have a national strike against cuts.

He has not put forward a strategy for defending our members in the health service and in our schools.

Only Hugo Pierre has the programme needed to arm Unison members for this challenging period when jobs and conditions are on the line.

Rules introduced by the Prentis leadership to clamp down on democratic debate in the union mean that candidates for union elections cannot ‘invite or accept’ support ‘in money or kind’ from any entity which ‘is not provided for in Unison rules’. This article has been produced without the authorisation of any of the candidates mentioned in it, in order to comply with these requirements.