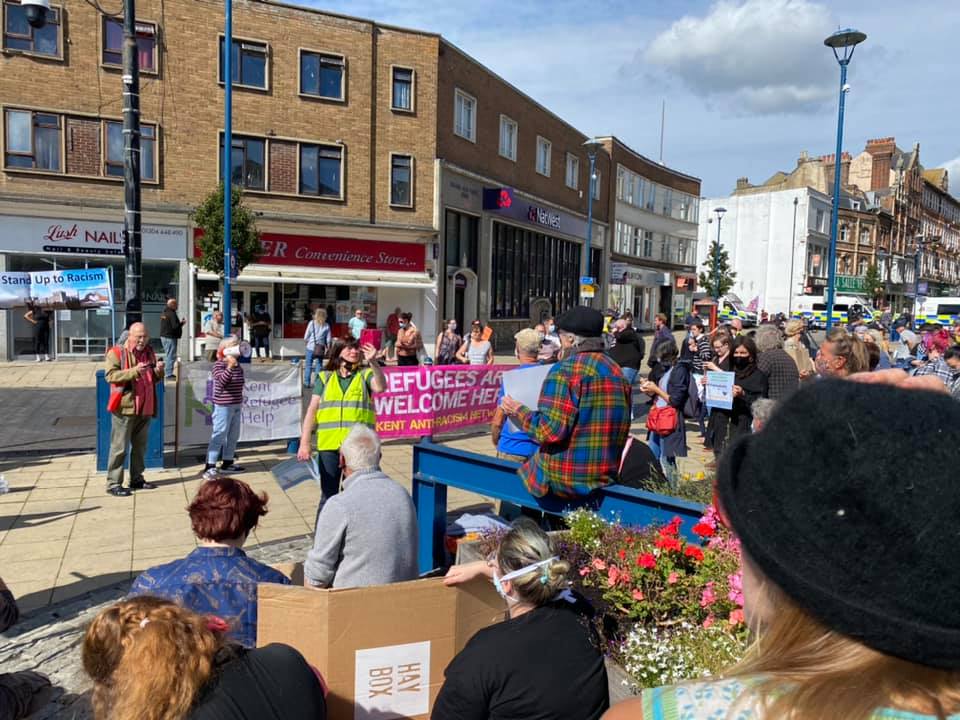 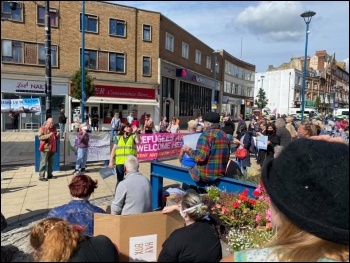 Eric Segal speaking to the crowd at the demo   (Click to enlarge: opens in new window)

Eric Segal, secretary of South East Kent Trade Union Council (TUC) and Socialist Party member, answered this when he spoke at the rally: “The cuts didn’t happen because handfuls of people crossed the channel fleeing from war, poverty and starvation. Austerity cuts began under Tory and Labour administrations, because capitalism doesn’t want and can’t afford to keep our services.

“Those cuts are set to continue unless we fight back. Councillor Gough was responsible for gleefully shutting down Pent Valley school in Folkstone.

“A-level students showed that when you fight back you can win. We need to build a socialist alternative to capitalism and mount an electoral challenge to councillors, whatever the colour of their rosette, who intend to carry out council cuts in next year’s elections.

“Any attempt to overhaul the asylum system must be linked to the fight against austerity, with a campaign for jobs, homes and services for all.”

Eric’s bold and clear message was interrupted with applause and cheers. After he finished speaking, he was thanked by many there.

A large number of young people joined the rally from all over Kent. Many signed the Socialist Party petition and supported our message: Don’t blame asylum seekers for Tory cuts.

The response to Eric’s final words – “a world without passports and persecution is only possible if we create a socialist world” – shows what is possible. The Socialist Party will work with all those who seek to build a democratic, mass, working-class, anti-racist movement – including standing anti-cuts candidates across Kent.