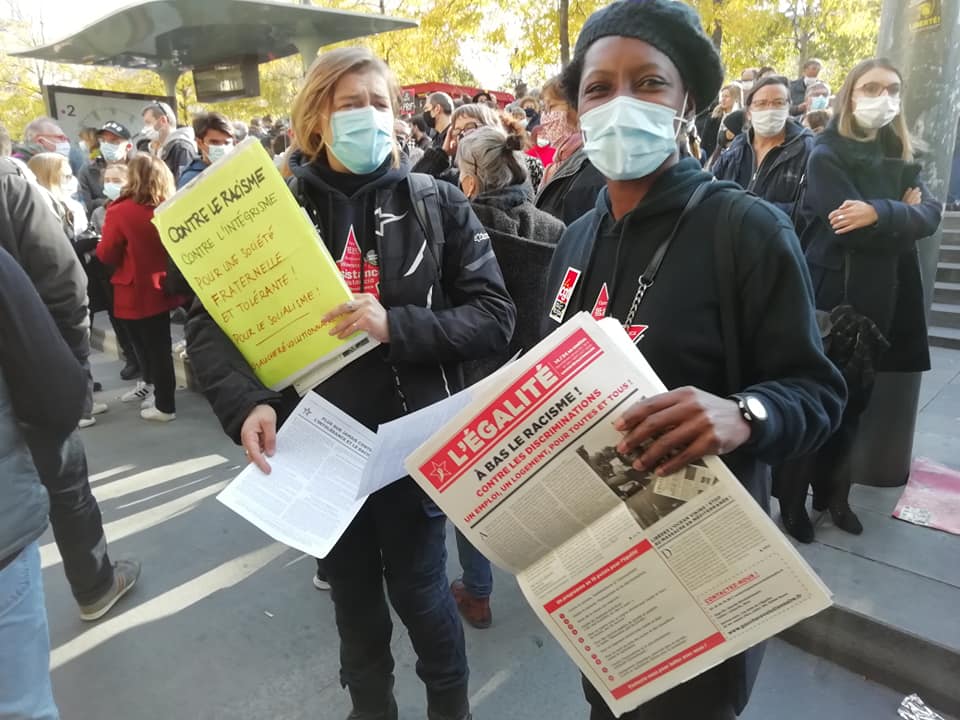 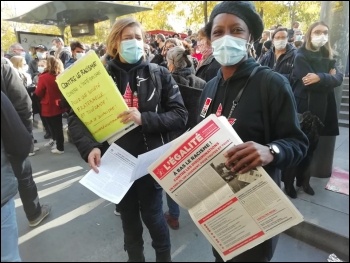 Gauche Revolutionnaire members on the protest   (Click to enlarge: opens in new window)

Gauche Révolutionnaire (GR – CWI in France) issued the following statement on 17 October (extracts reproduced here) after the beheading of a teacher outside his school in the Paris region. The teacher had shown controversial cartoons of the prophet Mohammed, reproduced from the satirical magazine Charlie Hebdo, as part of a lesson on free speech.

The GR statement, produced as a leaflet, was well received on demonstrations around France, as was the GR poster: “Against racism, against fundamentalism. For a fraternal and tolerant society. For socialism!”

This intolerance is combined with a stifling situation in society since the Covid-19 pandemic, and the arbitrary measures of isolation and repression against those who oppose president Macron’s policies.

“It is the republic that is under attack,” says education minister, Jean-Michel Blanquer. Such hypocrisy on the part of a minister who continues to support the dismissal of four teachers for helping students in an unfair baccalaureate exam test, or whose ministry ignored for months the cries for help from Christine Renon, head of one Pantin school, who ended up committing suicide.

The great ‘republic’ of Blanquer is bereft of justice, tolerance and equality. What hypocrisy on the part of people who claim to defend freedom of expression, but take offence and walk out when a student wears a hijab headscarf at a parliamentary meeting on the Covid pandemic’s impact on young people. A former minister from Sarkozy’s government said: “She is the one who needed to leave the room”!

How hypocritical that this government, which, according to President Macron, wants schools to help create “free citizens”, but is destroying conditions in schools by cramming students into overcrowded classes ,and forbidding them to challenge the selection method that excludes thousands of young people from access to higher education.

“They will not pass!” says Macron, explicitly taking up the slogan of the antifascists during the 1930s Spanish revolution. The leader of the far-right National Rally, Marine Le Pen, only had this to add: “We must drive it (terrorism) out of our country by force!”

Undoubtedly, this horrible event will be used as a new justification for the so-called law against ‘separatism’, which will reinforce discriminatory measures against Muslims in general.

We are fighting for teachers to have a maximum of 20 students per class – enough to be able to conduct classes and debates and discussions with the students. But this will require a break with Macron’s politics.

We have to fight for a different society – one where the economy will be publicly owned and where public services (health, education, etc) will be managed by the workers in these sectors, democratically, in conjunction with the population.

It is by fighting for such a democratic society – socialism – that we will eradicate intolerance and racism, which are used to divide workers, young people and the majority of the population against each other, instead of fighting our real common adversary: the ultra-rich and the governments which are at their service.