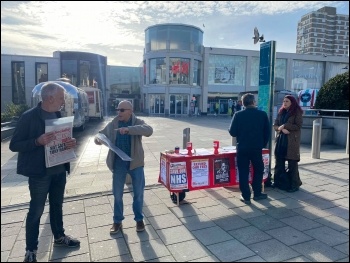 We decided to go to our usual spot in the main shopping area of Brighton. It was definitely a lot quieter with all shops around us shut, but people were out and about. There was no hostility to us being out campaigning from anyone, and no approach to us by police.

We had four members out, including our new recruit this week who sold his first paper. In the end we sold eleven papers, including making our first sale on the contactless card machine. We got a good response to our slogan: "Trump's gone - now let's get rid of Boris!"