"My hopes of secure employment killed" 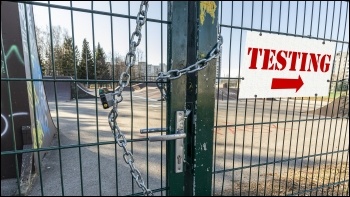 I was left stunned, shocked and bewildered when, on 9 October, Cineworld temporarily closed all 127 of its sites across the UK, putting 5,500 jobs at risk. Especially since they hadn't even informed us of plans to close cinemas beforehand. I only learned about it through a leak to the press!

This has put my job at the cinema in jeopardy, and I was even told by my own manager to start looking for work elsewhere in the meantime.

The mothballing of the cinema chain comes after James Bond's latest instalment No Time to Die was pushed back to April from this November, ironically killing my hopes of secure employment for the foreseeable future.

Being employed on a zero-hour contract, I don't always get the hours I need. And now to be told that I won't be getting any hours at all, for potentially many months, shows a complete disregard for the workforce, many of whom are barely living above the breadline. I still have to live at home with my parents because of the lack of pay and hours. Now any hopes of me leaving home have been put on the backburner.

What is also insulting is that I have been effectively kept on the company's books, but without shifts or even pay to compensate. The CEO Mooky Greidinger emailed us to say that our last pay day would be on 30 October, which meant we were only paid for shifts and time on furlough up to the 15 October, and now furlough has been extended, not a lot of help for us.

The fact that furlough isn't enough to live on anyway for most people, including myself, being under 100% of pay, means that this cut off is particularly cruel, with Christmas just around the corner. I'm sure Mooky however isn't worrying about where his income is coming from in the run up to Christmas.

This is why I am in the Socialist Party. We demand full pay, for as long as is necessary to protect jobs and livelihoods during the ongoing Coronavirus pandemic. This would stave off job losses, and give reassurance to myself and the thousands of other workers employed at Cineworld and elsewhere.

A publican speaks: Tories only back big business

Paul Smith, publican of The Schooner and The Three Tuns, Gateshead

As a small business owner, some of the spiteful conditions attached to the latest lockdown will make it difficult for some, if not most small businesses to survive. No business rates based handouts this time, just a set of rules that seem to be specifically designed to drive the small players out of the market.

My grandmother used to say to me when I was a little boy, "never trust the Tories, they are brought up to make sure the rich get richer and the poor get poorer". It made sense as a young boy and I'd often debate with the posh kids at my school and get heated about the lack of fairness.

As I got older, I began to think some of this rhetoric was just a misplaced loyalty to a bygone age, and people closest to me will remember before the last election I was often heard to say things like: "Boris isn't so bad" or "I just don't trust Jeremy Corbyn". I didn't vote in the end. Honestly, I thought Boris might make a reasonable fist of it despite Brexit.

How horribly, horribly wrong I was. I've watched this unfold, often opening my big mouth at the wrong times, saying things in hindsight I probably shouldn't have said. But I'm convinced about one thing - this government are mismanaging the pandemic in a disastrous fashion and no matter what happens from here, I'll be convinced that their decision making is based on the fact that Tories want the rich to get richer and the poor to get poorer.

Self-employed musicians, taxi drivers, delivery people, hospitality workers, kids on free school meals, hairdressers, small business owners and their employees - all suffering. Whereas those that already have plenty are rescued, bailed out, provided with ludicrously generous subsidies, and soothed with promises of a level of support post-Covid, that makes the investment in small businesses and even the furlough scheme seem like peanuts.

Remember the billionaires bailed out to the tune of £700 billion just a few years ago, despite the fact they caused the crisis with their greed and exploitation of the working class? Think about that figure. 0.001% of that would have paid to feed every child on free school meals in holidays. 2% would have paid every small business owner, every self-employed musician, taxi driver and other workers affected by this crisis, £1000 a month for a year, protecting the jobs, wellbeing, mental health and social welfare of millions of people.

Cuts to children's care when it's needed most

A recent Ofsted report describes a 20% increase in the numbers of babies killed or seriously harmed by their carers during the first lockdown, compared to the same period last year. 64 babies suffered deliberate harm. Eight tragically died.

Ofsted highlighted isolation, poverty, and poor mental health as contributing to this increase. The ability of social workers and health staff to support families face to face has been severely limited due to lockdown. The lockdown in March came on the back of ten years of cuts to council services, and many of these cuts have fallen on children's services, in particular Early Help services.

These services can be crucial in supporting families at an early stage, often preventing more serious difficulties occurring later on. In the first lockdown, schools did remain open for children who were known to be vulnerable. Understandably, many of these families were fearful of sending their children to school for health reasons.

During the first lockdown, visits by social workers to children at risk were restricted due to Covid risks. Many visits were undertaken remotely as opposed to face to face. Visits to children who were seen as being at the greatest risk did continue, but were often conducted on doorsteps or in gardens.

This has minimised Covid transmission risks, but weighing up how to keep children safe has been very stressful for staff. The capacity of the workforce has also been reduced as some staff have been ill or self-isolating. In the midst of all this, it is really shocking that many councils are continuing to cut staff in children's services. These cuts reduce the safety nets available to protect babies and older children who are at risk of harm.

Sunak's message to the bosses

Sunak's announcement that the furlough scheme is extended until March is not because he is sympathetic to the plight of full-time workers facing redundancy during lockdown.

It's more to do with telling the bosses that they don't have to announce mass redundancies as yet (businesses need to give legal notice of 30 days), because the furlough scheme was originally only up until the beginning of December.

I'm sure I'm not the only person who's been advised against going to university, because of how completely and utterly useless a degree would be. There's truth in that too. People with masters degrees have been having to find minimum wage jobs because there just aren't any good ones left.

So what does that mean for me? I'm 16, I'll be out of university in another six years. Then what? I doubt there will be any specialist jobs left by then, let alone for anyone younger than me.