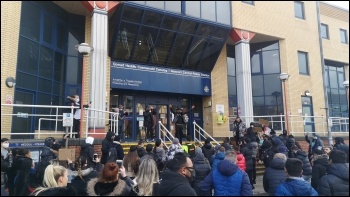 For the second time in just over a month, a young man has died at the hands of police in South Wales. Moyied Bashir's family asked for help for their son, who was suffering mental health issues, after being stabbed three weeks earlier.

Moyied's brother, Mohamed, has publicly described the harrowing events he witnessed. Police forced Moyied face down, handcuffed him and put a restraint on his leg directly over his stab wound. The family made officers aware of Moyied's mental health problems and injuries. They pleaded for police to bring an ambulance, but had to call one themselves. Moyied began to have breathing problems, but it was two hours before paramedics arrived. By then it was too late.

The next day over 200 mainly young people responded to the call put out by Moyied's brother. Angry and looking for a way to make their voices heard, they marched to the police station in the centre of Newport.

In response, the police locked the doors and retreated inside, while the demonstration occupied the steps and blocked the road. Protesters felt bewildered and frustrated. The mood of the crowd was: 'What happened to George Floyd was happening here. It's always been happening. How can we get justice?'

I walked up to the demo with a group of very young women. Like almost everyone there, they knew the family, and felt an intense sense of personal outrage. They seized upon the leaflet the Socialist Party had produced at an hour's notice.

"That's brilliant", one protester said, as she began to eagerly read our leaflet.

"All of it" replied her friend. "Do you have any more of these?"

They took a pile of leaflets and began handing them out in the crowd, explaining what we'd been discussing. When they ran out of leaflets, they came back for more.

The response was overwhelmingly positive, because we were putting a clear way forward. A few turned up to the snap meeting we called that night.

The Socialist Party demands that all the police officers involved on the night of Moyied's death be suspended immediately.

Gwent Police say they cannot release bodycam footage, because it's now the property of the Independent Office for Police Conduct (IOPC). That's not good enough.

We can have no confidence in the IOPC. No IOPC investigation has ever resulted in the successful prosecution of a police officer.

The local community is demanding answers - but not another stitch-up produced by an inquiry headed by establishment figures with a vested interest in concealing the truth.

We need a workers' inquiry, headed by a committee that includes representatives of the local community and trade unionists, whose only interest is in getting justice for Moyied's family and all ordinary people.

Events like Moyied's killing don't happen out of the blue. They aren't just another tragic mistake. They happen because of violent and racist practices in the forces of the state.

An independent workers' inquiry into the deaths of Moyied Bashir - and the death of Mohamud Mohammed Hassan in Cardiff on 9 January - should go beyond the details of their cases to investigate how the police operate.

It should address the failure of the police to properly investigate the death of 13-year-old Christopher Kapessa in 2019. It should demand the freeing of Siyanda Mngaza, the victim of a violent racist attack, currently serving four years in prison, simply for defending herself, while the perpetrators were not even charged.

Those who came out to protest for Moyied Bashir on 18 February in Newport, and those who have been protesting since 11 January for justice for Mohamud Mohammed Hassan, deserve a way to take their involvement further.

On 11 June last year - a weekday - 3,000 took part in the big Black Lives Matter march through Newport. 5,000 rallied in Cardiff the previous Saturday. All that passionate desire to fight for change should be channelled into a mass campaign for justice.

Young people and activists who want to fight to change society need a way to get organised. We need regular open community meetings, where people can bring their ideas and discuss what needs to be done - a chance for everyone to make their voices heard and take part in decision making together.

For more on the death of Mohamud Mohammed Hassan and the injustice against Siyanda Mngaza go to socialistparty.org.uk