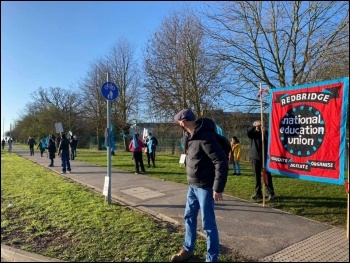 "What do we want? Justice! When do want it? Now!" Strikers at Beal High School in Redbridge, east London, are demanding an end to two-tier sick pay.

Bosses at the privately run 'academy' give staff employed after 2016 a fraction of the nationally agreed sick leave.

Workers with serious conditions like Covid or cancer can even face disciplinaries.

It's yet another attack on school conditions hidden in Tory and Blairite education 'reforms'. Management has refused to discuss the injustice.

Spirits were high. As with so many school strikes, it gave overworked teachers and teaching assistants their first opportunity to discuss and socialise in a long time.

Management, however, did not share the strikers' relief and confidence. They called the police down to patrol the picket line for PPE and social distancing.

School workers are already keenly aware of infection dangers due to their often overcrowded and poorly ventilated classrooms. Their picket line was perfectly safe. Meanwhile, school bosses stood glowering at the gates, without masks and not distancing.

Louise Cuffaro, secretary of neighbouring Newham NEU and a member of the Socialist Party, spoke at the strike rally to give solidarity. School workers in Newham have faced the same attack - academisation used to undermine national union agreements on pay and conditions.

Strikes in Newham defeated those attacks. In fact, because of Newham NEU's recent record in leading industrial action, just winning the strike ballot was enough to force management back.

The national leadership of the NEU should learn from the anger and confidence of strikers in Newham and Redbridge. Louise and others are standing in the union's national executive committee elections in April to bring that fighting experience and bold leadership.