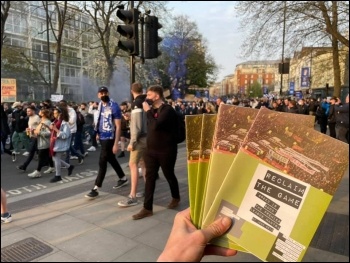 The withdrawal of the six football clubs in England from the Super League - after protests and action by fans, players and other club staff - will be rightly celebrated. Fans protested in their hundreds at Leeds, and in their thousands at Chelsea.

Now, democratically elected representatives - of fans, of players and other club staff, their trade unions, the wider workers' movement, and local communities around football clubs - must come together to begin the process of reorganising football. We should have the opportunity to inspect the finance books of football clubs, especially the richest that wanted to break away.

Join the Socialist Party's special online meeting on Friday 23 April at 6.30pm to discuss the fallout and what fans, supporters and workers can do next to kick capitalism out of football and reclaim the game.

The plan to set up a new 'European Super League' has met with frustration, anger and dismay. The proposals have also met with universal disdain, and have managed to unite normally partisan fans across Europe in opposition to this new league.

The proposal is to replace the existing European competitions with a new twenty-team competition. 15 places will be permanently filled by the founding clubs, including the 'big six' in England - Arsenal, Chelsea, Liverpool, Manchester City, Manchester United and Tottenham Hotspur.

The motivation of the 12 founding clubs is unapologetically money. The biggest two clubs in Spain - Barcelona and Real Madrid - are €1 billion and €900 million in debt respectively.

Capitalists in charge of the 12 teams see the new league as a way of ensuring higher revenue, richer TV deals and a selection of 'bigger fixtures' to market the league worldwide, following the disruption caused by the pandemic.

Since the 'breakaway' Premier League, and the influence of Sky and its TV money, the gap between the richest and poorest clubs has grown, and continues to grow. Football clubs are increasingly owned by venture capitalists with no loyalty to the club, the fans or the league they play in.

The fact that the same 15 teams would play in this Super League every season brings into question the very basic ideals of sporting merit and fair play. At the time of writing, four of the 'big six' in England sit outside of qualification spots for Europe's current 'elite' competition, the Champions League. This shows that the Super League has little to do with the most deserving, but is about the richest keeping their place.

Football's governing bodies and TV broadcasters appear to be echoing the views of the fans. But let's be clear, their issue is the money and control in football moving from themselves to the Super League clubs.

The Super League is an attempt by the rich owners to monopolise football and increase profits. Capitalism today is short-term greed, over long-term planning and people's need.

The Super League - fans don't want it, players don't want it, and I've yet to see anyone apart from the owners indicate this is anything other than damaging to football. The protests and campaigns are an opportunity to discuss the alternative ways football should be organised.

You can't easily change football allegiance, but I would struggle to cheer on Liverpool if this happens.

Former players, now TV pundits, Gary Neville and Jamie Carragher were full of class contradictions when discussing the Super League. Both are working-class people operating in a millionaires' world, but reminded by these events of their roots. They aren't entirely removed, despite their wealth, from the mood in Bury and Bootle.

Neville was grief stricken. He apologising for not resisting the Glazers, and called them "scavengers".

In the 13th edition of Reclaim the Game in March 2019, I wrote: "Yet again there is talk of a breakaway European Super League. It should be named the Corporate Greed League. A number of clubs, including... Real Madrid and five Premier League teams have discussed forming a 16-team European Super League, that could begin as soon as 2021."