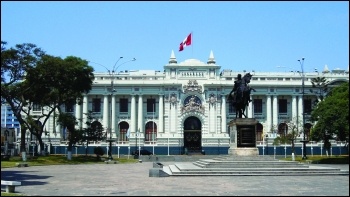 On 12 April, Presidential, National Congress, and Andean Parliament elections were held in Peru.

The big winner of the day was the left-wing socialist party, Peru Libre. Its presidential candidate, Pedro Castillo, came first with about 19% of the votes, in an election with a large number of presidential candidates. His party also came first in the Peruvian Congress and in the election of members to the Andean Parliament, with a similar percentage of the vote. Peru Libre will have 28 congress representatives.

No analyst foresaw the exponential growth of support for Pedro Castillo, a socialist and trade unionist from the most militant wing of the teachers' union, along with the growth of his party, Peru Libre.

An important layer of the electorate has politically expressed its indignation and desperation about the permanent political crisis and the lack of effective action by the state, especially in the midst of a coronavirus pandemic. This has led to over 55,000 deaths and impoverished the population.

The country was already in a situation of permanent political crisis before the arrival of Covid-19. Since the dictator Alberto Fujimori fled Peru in 2000, every president has been involved in cases of notorious corruption or been impeached by Congress.

The depth of the institutional political crisis in Peru is such that the traditional parties have virtually disappeared.

In the recent elections, the so-called political centre has been the great loser; in Congress, there will be eleven different blocs. To this division must be added an even greater polarisation.

Keiko Fujimori, who has been indicted for corruption and many Peruvians believe deserves jail, has gone into the second round to face Pedro Castillo. She is the daughter of the former dictator, Alberto Fujimori, once convicted for multiple human rights crimes.

Keiko Fujimori leads the Popular Force Party, which claims the legacy of her father's dictatorship. For some time, she has been under investigation for corruption. The state prosecution submitted evidence in an 18,000-page document and demanded a 30-year prison sentence for her.

The right wing went to the elections divided, with several presidential candidates.

In the second electoral round, Keiko is likely to be successful if the groups of diverse conservative voters regroup and vote for her, out of fear of reforms or social revolution should Pedro Castillo win. This could block the path for Pedro Castillo and the Peru Libre Party. However, even if this is the case, both the next government and Congress will be very weak.

The state abandoned all its social responsibilities as a result of the dictatorship of Alberto Fujimori. He privatised everything he could, and together with his henchman, Vladimiro Montecinos, plundered all they could.

The lack of state services has probably never been more noticeable than in the midst of the Covid pandemic. The public health system cannot guarantee oxygen to patients whose families cannot afford to pay.

Peru has been one of the countries most affected by the coronavirus pandemic in terms of both health and the economy, with the country's GDP (total output) falling 17.4% during the first half of 2020.

Who are Peru Libre?

The central slogan of Peru Libre is "no more poor people in a rich country". The party was founded in the region of Cajamarca, the poorest of Peru's regions, despite being a region of great mining wealth.

In its ideology and programme, Peru Libre claims "to be an organisation of the socialist left (...) To be of the left it is necessary to embrace Marxist theory and with its light interpret all the phenomena occurring in the world, continent, and national society, its causes and effects, and from this diagnosis propose criteria for solutions that lead to the satisfaction of the majority of the people. Likewise, the Mariateguist ideas [those of left-wing, inter-war writer and activist, José Carlos Mariátegui] are of vital importance with respect to our national, Latin American and even world reality".

In the same programme, they denounce the left that lives in permanent opposition without a governmental programme. They attack the left that has given up its historical mission and whose figures opted for the path of banking, becoming 'labour-business' friendly. They accuse NGOs of 'vile treason'.

A central political objective of Peru Libre is the convening of a Constituent Assembly to replace the 1993 Constitution that was imposed by Fujimori's coup d'état.

In its programme, Peru Libre also proposes 'robust participation of the state in the economy', the nationalisation of strategic sectors, increasing the current 3.5% of GDP allocated to public education, and the 5.4% of GDP spent on public health to 10% for each of them.

For health provision, Peru Libre proposes the creation of a universal, free, quality system. They propose to strengthen the national pension system and gradually eliminate the private pension system.

A sector of the union, frustrated by the constant agreements made by the Sutep leadership with various governments, formed the National Committee for the Reorientation of Sutep-Conare.

Conare led a national strike in 2004. In June 2007, it led an indefinite strike to fight against 'teacher evaluations' that ended job stability enjoyed by Peruvian teachers and the municipalisation of public schools in a way similar to the measures used in Chile to privatise education. Sutep joined the strike in July 2007.

The electoral gains of Peru Libre, which in the course of the campaign grew and strengthened, opens the possibility to build a workers' party in Peru based on mass organisations, with a genuinely socialist programme.