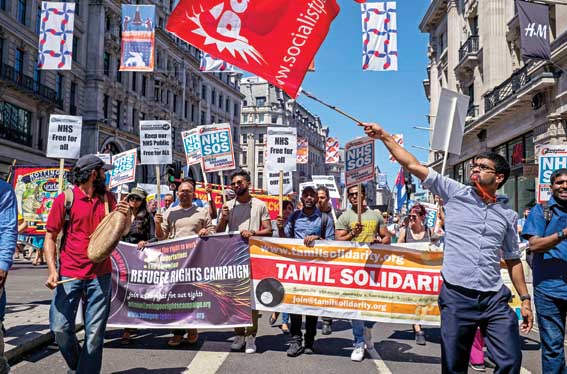 Unite to fight for socialism 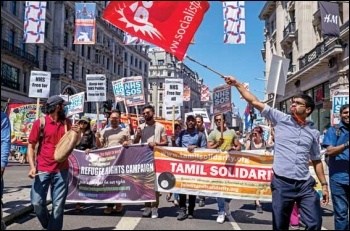 Refugees have linked up their fight with the need to defend public services from cuts Photo: Paul Mattsson   (Click to enlarge: opens in new window)

The nationality and borders bill has had its second reading in parliament. Home Secretary Priti Patel has said that this bill will give British people control back over our borders, and that the Tories’ priorities are the people’s priorities.

Well, nothing could be further from the truth. Working-class people have no real control over most aspects of our lives. If we did, we wouldn’t let the super-rich and private profiteers come in and exploit us and our resources.

If we had real control, we would give our health workers, teachers and all key workers the pay rise they deserve instead of increasing military spending by £16 billion or, as this bill proposes, spending £412 million a year jailing refugees who cross the Channel – five times more than the cost of housing them in the asylum support system!

If the bill is passed, people fleeing war, persecution and oppression will be denied asylum based purely on how they arrive in the country. Refugees and asylum seekers arriving by boat, many of them already severely traumatised, will be formally classified as criminals and face the prospect of punishment, including being jailed for up to four years.

Only those coming via ‘safe and legal’ routes will be considered for asylum. But only a very small percentage of refugees and migrants have access to such routes.

“While people are dying we have a responsibility to act,” declared Priti Patel. There is no end to her hypocrisy. Already there is huge anger against her opposition to England footballers taking the knee and then condemning the racist abuse they received.

This is the same person who went as far as wanting to bring in wave machines to stop the boats from crossing the Channel. The idea was so brutal that even her advisers were forced to reject it over safety concerns.

But the reality is that the Tories don’t care about people dying. Tens of thousands have unnecessarily died from Covid because the Tory government chose to put profit before people’s lives. Refugees and asylum seekers are dying precisely because the legal routes to asylum have been closed off! Making routes more dangerous is not going to stop those who are prepared to risk their lives to find safety.

We can’t trust the Tories with our NHS and other public services that have been cut to the bone, and we can’t trust them to run the asylum system either. The nationality and borders bill should be scrapped. We need a fair asylum process, democratically controlled by elected committees of workers’, community and migrant organisations.

With this bill, migration and the lives of asylum seekers are once again being used as a weapon to divide working-class people and divert attention from the crisis of the Tories and the capitalist profit system they defend.

The working-class and young people in Britain need a party that fights in the interests of all workers: that will fight for investment in jobs, homes and services for all, and for the nationalisation of the banks and the major companies so that the vast wealth that is currently held in the hands of a few can be owned, controlled and planned democratically for the benefit of the majority.

This must form part of a global struggle for a socialist alternative to capitalism worldwide, so that we can bring an end to the wars, poverty and persecution that force people to flee, and can create a world that guarantees a decent standard of living for working-class, young people and the poor everywhere.