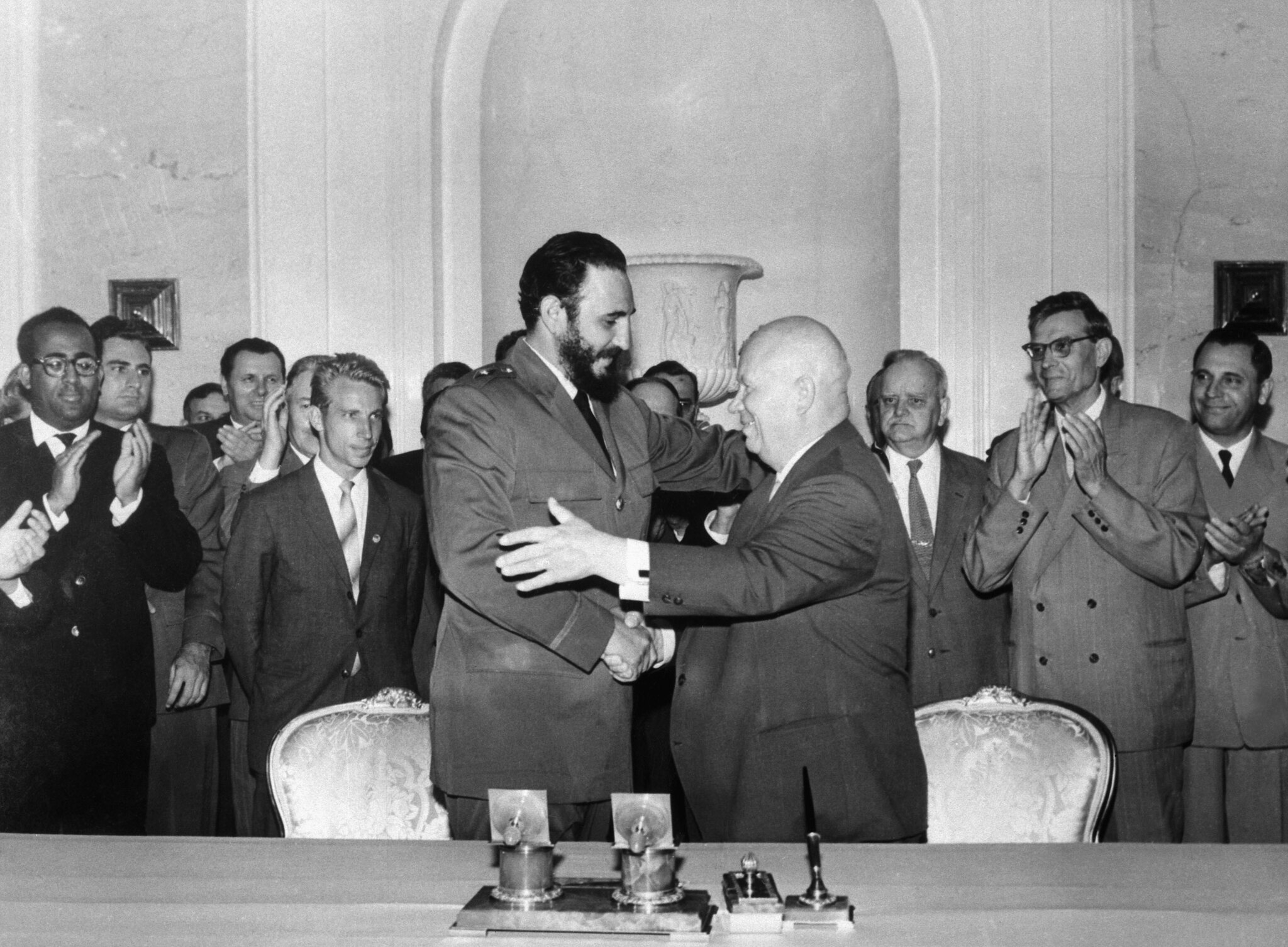 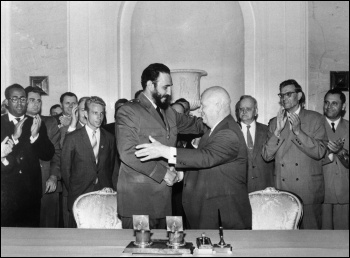 Premiers Nikita Khrushchev of the Soviet Union and Fidel Castro of Cuba, photo   (Click to enlarge: opens in new window)

The Cuban missile crisis in 1962 is far from underrepresented in books and media. But ‘Nuclear Folly’ uses fresh material provided by newly declassified files from the KGB archive, shedding light on the Soviet side of events and giving Serhii Plokhy’s account authority.

The book is as fast-paced and gripping as the real events.

The background to the crisis is the ‘Cold War’, when the United States and the Soviet Union emerged from World War Two as rival superpowers. The US based on capitalism and the Soviet Union on a bureaucratic, top-down planned economy – two opposed systems, and both had nuclear weapons.

In 1945 the US dropped two atomic bombs on Japan and the horrors of nuclear weapons were revealed. Both countries developed and stockpiled enough bombs to effectively destroy the world. But such a deadly scenario was unlikely in the aftermath of World War Two. If one country launched its weapons, then the other would have immediately retaliated, resulting in ‘mutually assured destruction’ (MAD).

The book quotes Kennedy’s speech, warning of a possible nuclear war, when he said: “Our history demonstrates that we have no desire to dominate or conquer any other nation or impose our system upon its people.”

This is laughable, as US foreign policy has shown before and since. In fact, the US had actively intervened to overthrow the Cuban government ever since the revolution in 1959, which nationalised US businesses, and broke with capitalism.

This hostility and fear of ‘socialism’ on its doorstep, albeit in a bureaucratic distorted form, culminated in a disastrous US-backed invasion of Cuba known as the ‘Bay of Pigs’.

The potential nuclear armageddon seems a world away, as the train of events leading to the missile crisis start off in the incongruous surroundings of the US embassy in Vienna.

Events take a comical turn as Soviet missile specialists disguised on this secret mission as ‘agriculturists’ are flown out to Cuba but are forced to stop over in the Bahamas during a storm. The Russians exited the plane into tropical heat and high humidity still dressed in Russian clothes, and were instantly gawped at and photographed by hundreds of American tourists!

This is all colourfully described in the book and belies the seriousness of later events, which are vividly recounted.

A new US-backed invasion called ‘Operation Mongoose’ was planned for October 1962. Both Cuba and the Soviet Union knew of it, and in May Fidel Castro had accepted the offer of the Soviet Union to provide Cuba with nuclear weapons to defend the country and government from US intervention.

In Washington DC there were long debates about what to do. The US military inevitably wanted to bomb the Soviet bases and push ahead with invasion. Kennedy feared that the Soviet Union would retaliate by seizing Berlin, provoking another European war. They compromised on a naval blockade.

Kennedy is sometimes praised for his actions in averting nuclear war, but the reality is he and the US did not know that at this point there were in Cuba, skilfully transported and concealed, 43,000 Soviet troops, nine armed nuclear bombs, and warplanes all ready with orders to deploy against an invasion force. 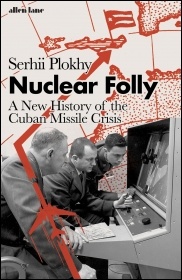 The book quotes defence secretary Robert McNamara, who found this out 30 years later, saying: “It meant that had a US invasion been carried out there was a 99% probability of nuclear war.”

On 24 October, six Russian ships on course for Cuba turned back rather than run the blockade, and by 26 October negotiations between the Soviet Union and the US were underway.

There is also hypocrisy from Kennedy and the US. Khrushchev asked why it was alright for the US to have nuclear weapons in European countries next to the Soviet Union but not Soviet weapons in the Western hemisphere.

In fact, the Soviet Union benefited from the negotiations to de-escalate the crisis as, behind the scenes, Robert Kennedy delivered a message to the US Soviet Ambassador saying that US Jupiter missiles would be removed from Turkey if the Soviets removed theirs from Cuba. An agreement was reached on 28 October. The missile crisis was over.

Capitalism has spent almost 60 years either downplaying the crisis, blaming the Soviets or wrongly praising Kennedy.

But Nuclear Folly argues that in 1962 there were two powers that didn’t want all-out war, especially nuclear, but very nearly had it. Now there are several nuclear powers in an increasingly unstable and multi-polar world.

Although MAD, and the potential power of mass pressure from the working class, stays the hands of the nuclear states at this stage, as long as capitalism exists internationally the possibility of future nuclear armageddon is still with us.

As our forerunners did in the 1960s, the Socialist Party opposes nuclear weapons and continues the struggle to replace capitalism with a socialist society which would mean a world free of the horrors of war and destruction.