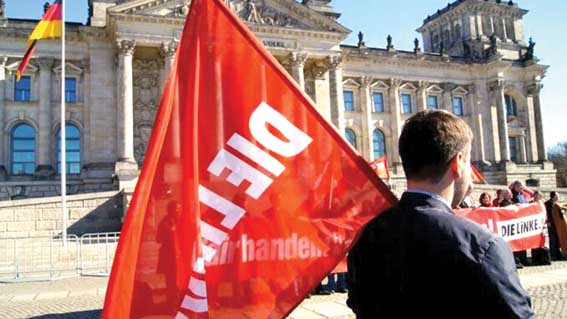 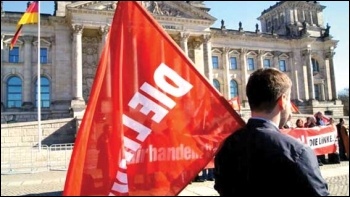 The Left Party, Die Linke, has seen its support drop to between 6% and 8%   (Click to enlarge: opens in new window)

Opinion polls in the last weeks before the 26 September German general election have shown rapid changes, especially for the two main contenders – the conservative Christian Democrat CDU-led bloc and the Social Democratic Party (SPD). These two parties, currently in a ruling ‘grand coalition’, have seen big swings in their standings.

The CDU’s support is down by a third since 2017 and, in some polls, is currently around 21% – practically its lowest ever. The SPD, which just over two years ago was as low as 12% in the polls, has recovered and is now polling around 25%, a big improvement but still way below the 38.5% it won in 2002.

The left party, Die Linke, has seen its support drop to between 6% and 8%, perilously close to the 5% threshold to get into the national parliament, and seriously down on the 9.2% it won in 2017.

Die Linke failed to gain from the previous sharp fall in the SPD’s support and, now, in desperation, its four national leaders have rushed out an ’emergency programme’, which they hope can make Die Linke be seen as a potential coalition partner by the SPD and Greens, and thereby worth voting for.

Sascha Stanicic, the national spokesperson for Sol (CWI in Germany) and a Die Linke party congress delegate for the Anti-capitalist Left current, explains the significance of this development.

As a delegate to the national party congress of Die Linke, one wonders these days why delegates bothered to read an election programme, discuss amendments, hold a special party congress in June and finally vote on it. Because on 6 September four people – the party and parliamentary group leaders – presented an “immediate programme for a change of policy” which effectively threw the party’s election programme into the dustbin.

The issue is not only about what is in this emergency programme – which not even the party executive could read, let alone discuss, before it was published! – it is about the signal sent out by this publication.

Whoever thinks that this signal is a clever move to mobilise votes in the last weeks of the election campaign is mistaken. The opposite will be the case; endangering the chance of Die Linke being returned to the Bundestag.

A government alliance with the SPD and the Greens would be a voluntary political retreat – the abandonment of left programmes and of the actual mission of a left and socialist party to propagate an alternative to the capitalist system and to organise and mobilise people for it. All experience with government participation of left parties in coalitions with pro-capitalist parties shows this.

If Die Linke wants to get out of its present hole, it must make its role clear to those voters who no longer feel represented by the established parties. It must make it clear that it does not belong to the political establishment, which fewer and fewer people trust.

But because they want to belong to the club of those who can govern, Die Linke’s main leaders eat ‘humble pie’ and have a reflex reaction to soften policies when faced with any accusation of being too radical.

An example of political retreat was seen on the recent Anne Will TV talk show. There, Janine Wissler (co-chair of Die Linke) was confronted with her not-so-long-ago past as a member of the Marx21 network. Anne Will read out a long quote from Marx21’s general socialist principles – which said many right things about the need to overcome capitalism.

But the co-chair did not respond confidently and take the offensive. The principles of the political current to which Wissler belonged for 20 years are suddenly, according to her, now just “some internet pages”.

In particular, Wissler emphasised that what had been read out had nothing to do with her own position on a government coalition with the SPD and the Greens. After all, Wissler pointed out, she herself had held exploratory talks in the federal state of Hesse, and had demonstrated her willingness to form a coalition there.

Why didn’t she say: “You know, Ms Will, this country and this world could do with a revolution. That means a fundamental change of circumstances, including changing the distribution of wealth, the power relations in society and, yes, also the ownership of resources to end the situation where a few dozen banks and large corporations control the world economy and thus determine the lives of billions of people.

I have no confidence that the SPD and the Greens want to change anything fundamental. They have had long enough and often enough opportunities to do so. I think something will only change if people stand up en masse, so that the millions of workers finally get wages they can live on, so that rents finally go down, so that climate change is stopped and armaments and wars are ended.

All this is a product of the capitalist system. It is clear to me that the ladies and gentlemen here do not want to talk about it. They profit from it. That’s why it’s so important that there is Die Linke, which doesn’t take part in this game and wants to change the conditions.”

But Janine Wissler cannot say anything like that because, with Die Linke sitting in coalitions in the federal states of Thuringia, Berlin and Bremen, and the party leadership begging Baerbock and Scholz (the leading candidates of the Greens and SPD), to recognise its ability to govern, the party’s actual practice contradicts making any statements on the above lines.

It is precisely the problem of Die Linke that its drive for coalitions with pro-capitalist parties contradicts its claims to be a socialist party in action and not just in its formal party programme.

We call on all members and supporters of the party to fight together with us and other socialists in the party, such as the Anti-Capitalist Left, for Die Linke to take a militant, socialist course. Without this, the party’s very future can be at stake.

It is also necessary to put an end to the unspeakable practice of party and parliamentary group leaders bypassing the democratically elected bodies of the party. The party executive, which has been seen as a ‘left’ executive since its election in February, should call its two chairpersons and the parliamentary group’s two chairpersons to order and end this method of operation.