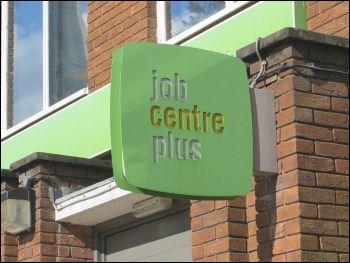 I had applied for pretty much every job going locally on their website, but only the night shift application resulted in an interview. Knowing I was writing this article for the Socialist, I asked the store manager how many applicants they'd had: "125 applications, 20 interviews, three jobs".

So this is what being one of the lucky few feels like, waiting for a bus gone midnight at the side of a motorway in an ill-fitting shirt and tie. And it's definitely progress.

I'd had months of submitting CVs and filling in forms online with no response. So I rewrote my CV from start to finish, omitting many of my skills, because employers couldn't put them to a productive use.

A month ago, I did an online course on CV writing. It is part of the privatised Restart scheme the government gave Maximus roughly £700 million to run.

This scheme is intended for people who have been unemployed longer than a year, something that doesn't apply to me.

But it is hard to argue when job centre staff pose it point-blank: "Do you want a job? Because if you refuse to go on this course, we'll have to take it as a sign you don't." That would mean my Universal Credit would be slashed, and I'd be unable to pay my bills.

On the CV course was an older man, close to retirement. He'd worked all his life, paying into a pension. A decade or two in the past, he would have been able to retire on that. But big business declared a pensions crisis, and the politicians acquiesced, raising retirement ages and forcing him to look for work alongside the rest of us.

As far as I can tell, Maximus mainly adds an extra layer of bureaucracy and blame for the unemployed.

Struggling to get interviews? "Please send us screenshots of submitted applications, so we know that you're actually looking for jobs."

Moreover, unwilling to travel for hours before dawn, and before public transport is running, spending multiple hours' wages to get there? "We have to remind you that you've got an obligation to find employment as soon as possible." So you find yourself feeling that you have to say 'yes', just out of self-preservation.

I want to work. I'm confident I can learn how to do the roles I'm applying for. I'm also sure this applies to the others looking for work I've met on online courses or in staff cafeterias, waiting to be interviewed.

The system puts the blame on us as individuals, with the threat of benefit cuts held over your head. But the reality is that it's capitalism that is failing us, not providing the opportunities to put our productive talents to use.

We're constantly told that there are lots of vacancies out there. But my experience is very different.