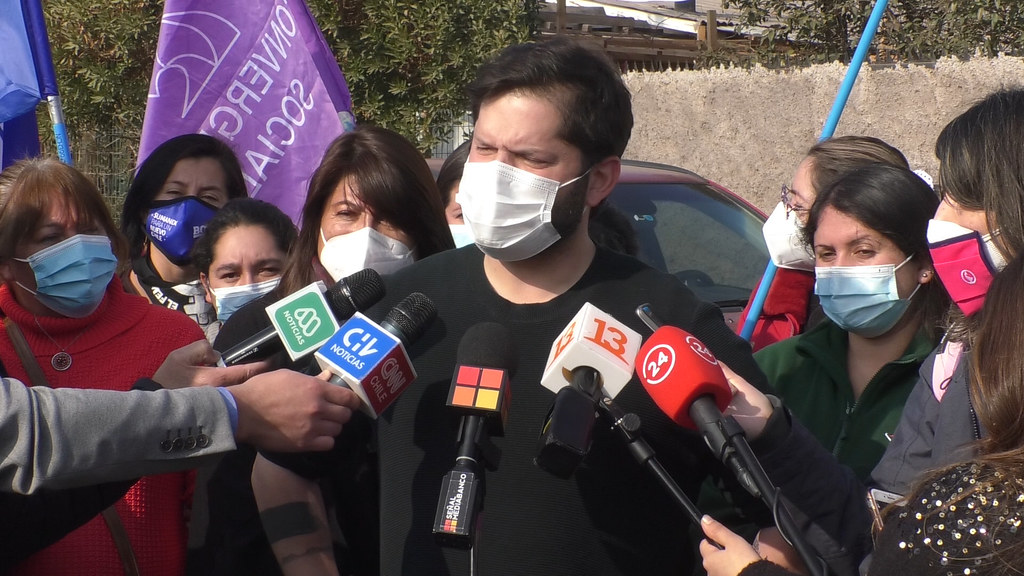 But struggle for social justice requires building a revolutionary alternative 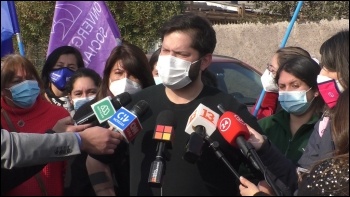 New president Gabriel Boric will not threaten the interests of the capitalist ruling class, photo   (Click to enlarge: opens in new window)

On 19 December 2021 the second round of the presidential election was held in Chile. Gabriel Boric, of the Frente Amplio electoral coalition, obtained an overwhelming victory, winning more than four and a half million votes (55.87%). The defeated ultra-right candidate, José Antonio Kast of the Christian Social Front, won just over three and a half million votes (44.13%).

Hundreds of thousands of people took to the streets across the country to celebrate Boric’s triumph. For now, there are high expectations about what he will do. However, Chile’s ruling class is putting massive pressure on Boric not to threaten their interests, and he has already tried to reassure them. But, under pressure from the mass movement and the demand for change, Boric could be pressured to go further than he wants to with political, economic, and social reforms.

Kast’s ultra-right adherents thought the election would be very close. What they did not expect was that over 1.2 million more people would vote in the second round than in the first round. These were mainly young people who were deeply repelled by Kast, who had promised to carry out a series of extremely reactionary measures which would see society thrown back to the dark days of the Pinochet dictatorship (1973-1990).

Some argue that this election was much more than a simple election, that basically it was a plebiscite on the last remnants of the rule of Pinochet, and on anti-worker and anti-poor policies. Many also say that the election shows that people’s hopes for change overcame the fear that the ultra-right tried to whip up to oppose any changes.

Kast’s ultra-right programme would have seen the acquittal of those perpetrators who are currently imprisoned for the atrocities they committed under Pinochet.

The masses voted against a candidate from the ultra-right who wanted to remove the few social benefits that the capitalist state gives to the most oppressed sectors of our society.

Young people also voted against a misogynistic candidate who promised to remove support for single mothers (benefits would only be given to women who were married), and who wanted to abolish the Ministry of Women and Gender Equality, and to prohibit some abortions.

Kast also wanted to raise the retirement age to 75 years and maintain the AFP – a private pension system that large sectors of the population have been demanding an end to for years. Millions of workers and their families have mobilised in the streets throughout the country to demand an end to the AFP system that only serves employers but not those workers facing retirement.

Kast promoted greater repression against the Mapuche indigenous people and a generalised militarisation of their territory. Kast is also virulently homophobic, and is unable to hide his hatred of the LGBTQ+ community.

In the election campaign, Kast tried to exploit to his advantage the concerns that exist among some voters over immigration, encouraging xenophobic policies against foreigners. He proposed to build a massive trench in the north of the country, to prevent migrants from entering Chile. It’s a ridiculous plan but, like Donald Trump’s US-Mexico border wall, was pitched to win the support of some racist and xenophobic sections of the population who, at the moment, are a minority.

Not a vote for Boric

For all these reasons, many on the left, despite not being fully convinced or having trust in Boric, called for a vote against Kast.

Socialismo Revolucionario (Chilean section of the CWI), was among those organisations that campaigned against Kast, which meant calling for Boric to be marked on the ballot. However, this did not mean signing a blank cheque for his policies.

Our position in the first round was to explain that there was no genuine left candidate to vote for. This was because Boric’s candidacy, and other supposedly ‘progressive’ candidates, did not offer a real alternative to capitalism.

We opposed some of Boric’s policies. Among other things, we criticised the position he took on the mass struggles of 2019 against inequality, austerity and social injustice.

As a parliamentarian, Boric signed the November 2019 pact for ‘social peace and a new constitution’. This was a political move to save the current right-wing president, Sebastián Piñera, from resigning, as millions of protesters were demanding, and mobilising on the streets to enforce.

Boric was also one of those responsible for passing repressive measures, such as the ‘anti-barricade law’, against young people who took to the streets to fight. As a result, to this day, there are still many political prisoners in Chile. Without the struggles of these young people, now in prison, who encouraged the popular revolt, nothing of what we are seeing today would be possible.

As we raised in the second round, notwithstanding the genuine widespread fears of Kast’s ultra-right ideas, the two candidates, although with different policies, are both representatives of the elite of this country. Neither of them represents the interests of the working class and we cannot trust either of the two, although the candidate with fascistic ideas was the most dangerous.

All those who took to the streets to fight for substantive changes in October 2019, including those who were killed, maimed and imprisoned, were unfortunately not represented by any of the candidates. We demand the immediate release of all political prisoners.

Chile’s working class needs its own political representation. We need a national assembly of delegates from the unions, social and popular movements, the Mapuche people and the students, to plan a struggle and discuss the need to build a workers’ party.

The next government headed by Boric will inevitably be under great pressure from the businessmen and the elite of this country to continue preventing the changes that the majority of the population is demanding.

We have to insist on a workers’ government that clearly considers taking radical measures: nationalisation of the banks, the monopolies, the large landowners and forestry companies and the renationalisation of copper, lithium, water and all the natural resources that belong to all the inhabitants of this country and not the richest 1% of Chile that appropriated them. These must be under the democratic control and management of the workers and the general population.

Only with these measures can we ensure decent jobs, decent pensions, quality health and education and housing for workers and their families. In other words, dignity for all working people.

If none of this is carried out, the enormous expectations that have been created with Boric’s victory can quickly be reversed. If once again the promises that were made during the election campaign are not fulfilled, as has been the case in the last 30 years in Chile, the masses will take to the streets again.