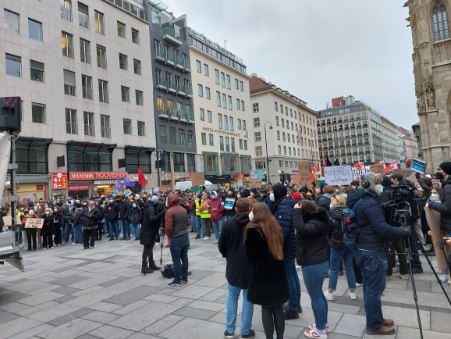 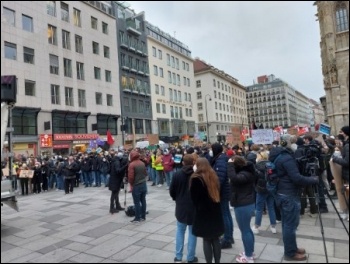 In the middle of the Covid Omicron wave, Austrian students walked out in a school strike on 26 January, following a warning strike on 18 January.

Their demands included better health and safety measures in schools, and easier final exams for this year. The government wants to ‘get back to normal’ – but school students have suffered from the effects of the pandemic over the last two years with distanced learning. Previous graduating classes had easier conditions for their final exams.

The pandemic no doubt restricted the possibility for protest. Students were therefore hesitant to meet up for joint demonstrations across schools – but that decision was also down to the leadership of the organisers.

Joint demonstrations did happen in the 26 January strike – with masks and a plea to get tested first – but they were not as big as they could have been, with a few hundred in different cities across Austria.

The 18 January warning strike was called by a broad platform for school student representatives. But the 26 January event was called by the Aktion Kritischer Schüler_Innen (AKS), the school students organisation linked to the SPÖ (Social Democrats).

For 18 January, school student representatives called for the strike to take place during the whole morning. Whereas, AKS called for a less far reaching, one-hour warning strike that day.

Then AKS narrowed down the demands for 26 January, focusing solely on easing final exams. It was harder to mobilise the classes that would not graduate this year.

Sozialistische Offensive took part in the demonstrations and distributed leaflets with suggestions on how to build the movement. We argued that action committees at the schools were needed to organise a proper school strike, to decide on the demands in meetings of the school students, and to make sure all the students at the school were mobilised for the strike.

We also argued that the movement should not be taken prisoner by the SPÖ, who obviously looked to the school students as potential voters, as the voting age had been lowered to 16 in 2007.

Young people, along with working people, the poor and retired, need a party that represents their interests, in contrast to pro-capitalist parties like the SPÖ and Greens. The latter is in a governing coalition with the right-wing People’s Party (ÖVP).

After the election successes of the Communist Party in Graz and Links (Left) in Vienna, we proposed that they should take a joint effort towards building an election alliance as a step towards a new mass workers’ party.

The need for such a party is all the more urgent if we look at the causes of students’ frustrations, ie the increasing pressure to perform well at school in order to be able to compete in the labour market.

It is the capitalist profit system that is at the heart of those frustrations. We need to break with it, for a socialist transformation of society that puts people’s need at the centre, instead of profit for the few, so that education can be radically different.