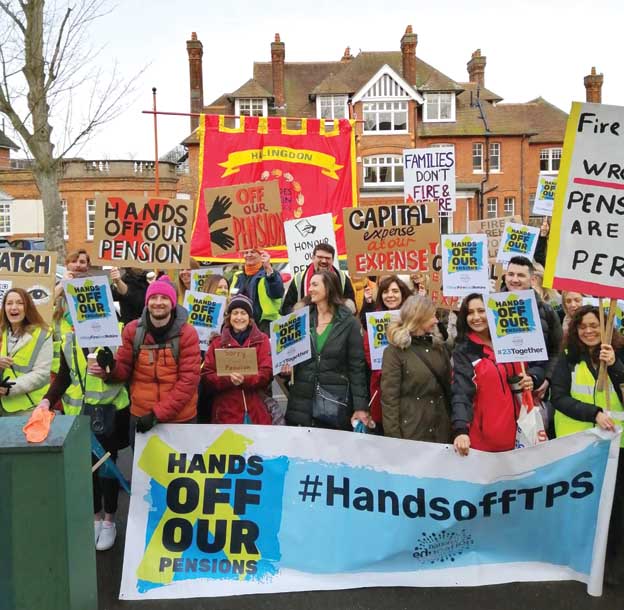 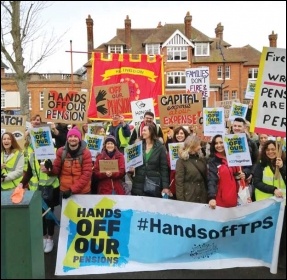 1,500 members of the National Education Union (NEU) at 23 independent schools within the Girls’ Day School Trust (GDST) have taken strike action over plans to withdraw staff from the ‘Teachers’ Pension Scheme’. Socialist Party members joined them on picket lines.

“This is the first strike here in 149 years! The issue is pensions. The employer is threatening firing and rehiring us to get through a massive attack on our pensions. They are threatening to withdraw from the Teachers’ Pension Scheme and replace it with one through Aviva that would leave the average teacher 20% worse off in retirement. There was a brilliant ballot turnout – an 84% turnout with a 95% yes vote. We have four picket lines today.”

Picketers lined the roads outside Northampton High School on 10 February as teachers stood together in solidarity against attacks on their pensions. There was a noticeable display of support from every HGV driver who passed the pickets.

Northampton High School is part of a chain of GDST independents. The company intends to slash pensions through removal of membership from the Teachers’ Pension Scheme (TPS) and threatened fire-and-rehire tactics if this move was resisted. All before any consultation with the staff.

One teacher said: “A contract used to be binding, forever, now they just tear them up.”

One of the NEU organisers told us this is the first strike for this school which had an even bigger turnout. The majority on the picket lines were women. When I asked one teacher what her pupils thought of the strikes she said: “I consider it part of my role to teach the girls to stand up for themselves, what kind of example would I be setting if I didn’t fight?”