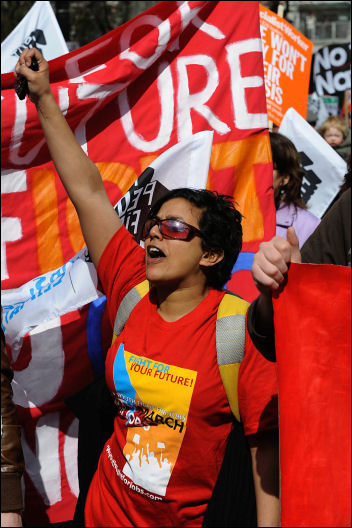 All of the policies outlined here are only the first steps towards constructing a new type of society. Modern capitalism has created riches and innovations beyond the wildest dreams of our grandparents and great-grandparents.

Yet we are constantly being told that we have no choice but to accept erosion of our quality of life, increased poverty, worsening public services and longer working hours.

Humanity is capable of space exploration, has mapped the human genome, and can recreate the conditions of the big bang in the Hadron Collider.

Yet the world cannot be fed on the basis of capitalism. For most of human history it has not been possible to satisfy even the most basic human needs for everyone on the planet.

Now, as a result of the labour and ingenuity of working people, the potential exists to eliminate want forever. The barrier to achieving this is the capitalist system itself.

Based as it is on the private ownership of the economy, capitalism creates immense inequality and deprivation when the potential exists for providing a decent life for all.

A socialist government would take the big corporations, which dominate Britain’s economy, into democratic public ownership, under workers’ control and management, in order to plan the development of society for need instead of profit. This would only be possible with the active support of the majority of working people.

A genuine socialist government would not take into public ownership small businesses, such as local shops, many of which are currently forced out of business by banks withholding credit and by the competition of the multinationals,.

Nor would it, as opponents of socialism claim, stand for the taking away of personal ‘private property’. On the contrary, socialists are in favour of everyone having the right to a decent home and the other conveniences of modern life.