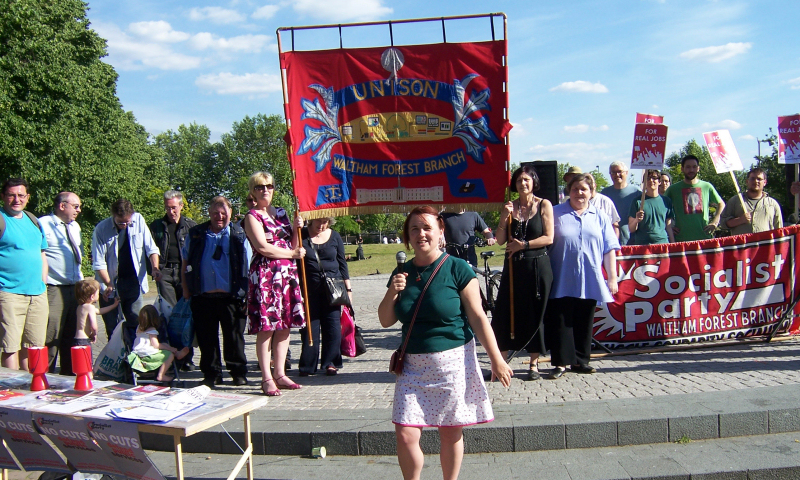 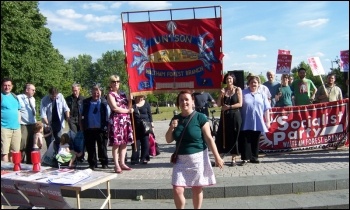 Up to 200 socialists and trade unionists from a range of city workplaces united to vent their anger at the Con-Dem budget on Tuesday 22 June at a Brighton, Hove and District trades union council organised demonstration outside Hove town hall.

Union representatives from Unison, GMB, PCS, UCU and NUT trade unions, along with representatives from Brighton Benefits Campaign, all rounded on chancellor George Osborne’s repressive plans to attack public services and welfare rights. These plans will see the poorest workers and the unemployed paying the price for the bankers’ failure that underlies the current economic crisis.

With an initial £3.5 million already set to be cut locally, the axe that threatens public services across Brighton and Hove is in the hands of the city’s 54 councillors.

All 54 were invited to attend the demonstration to publicly agree to the trades council’s demands to vote down any budget presented to the city council that will result in: redundancies in the council workforce; cuts to the council’s public spending budget; the privatisation of any part of the public sector; attacks on pay, pensions and working conditions of the council workforce; and increases in council tax.

A handful of Labour Party councillors attended and hypocritically spoke of their anger at the Con-Dem cuts. Before the May general election, Labour chancellor Alistair Darling was prepared to cut “deeper and tougher” than Margaret Thatcher in the 1980s.

Socialist Party speakers at the rally were supported by loud applause when they condemned New Labour’s record of privatisation, wars, job cuts, school closures and attacks on trade union rights and living conditions for millions of working people during their 13 years in power. 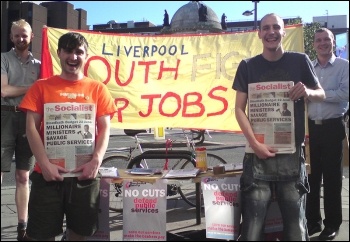 Over 120 people rallied in front of the Coventry Council House on Tuesday 22 June in protest against what has been termed ‘the harshest budget for decades’.

The protest was initiated by Coventry trades union council, and had been called in anticipation of the budget, but was also a response to cutbacks that had already taken place under the previous Labour government and Tory council. Now, the roles have been reversed, with the Tories in power nationally and Labour running the council.

The rally, which was covered by the local press, drew support from workers and unions across the city. Unison, NUT, UCU, TSSA, PCS, CWU and Unite unions were all represented. The Socialist Party and Youth Fight for Jobs also supported the rally.

The rally heard from a range of speakers, including those involved in current disputes. The overarching message was ‘we will not pay for the crisis, and we fight these attacks all the way’. At the same time, several speakers also pointed out that this is a systemic crisis, a capitalist crisis, and that a socialist alternative is needed.

Following the rally, a 55 person meeting discussed the call for a Coventry Against the Cuts campaign, again initiated by the trades council.

Around 200 people joined a rally on College Green in Bristol to protest against the savage attacks announced in the budget. With a VAT hike and cuts of 25% across most government departments this will unleash a whirlwind of cuts and closures, job losses and privatisations. But the mood of the protest rally was less one of fear and more one of anger and a preparedness to fight back against these attacks. There were banners representing many trade union branches in the city and most of the speakers were union activists from the public sector or privatised services who will be at the sharp end of fighting the cuts.

Robin Clapp, a Socialist Party member, spoke as one of the leaders of the early 1990s anti-poll tax campaign in Bristol. He explained that the cuts are not inevitable and can be stopped with a strong campaign.

The meeting ended with calls to build the anti-cuts movement and for a demonstration in October around the government spending review when it will be revealed in more depth where the axe is to fall. 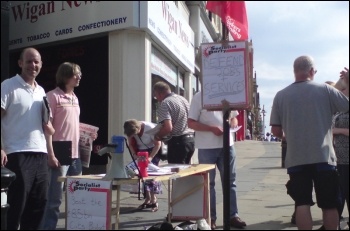 “This is just the start,” declared Katrine Williams, president of Cardiff trades union council, at the protest organised by the trades council against the Con-Dem budget. “The cuts haven’t been implemented yet and we are already ready for action.”

Over 100 trade unionists turned out at the Senedd at the National Assembly for Wales to protest against the Con-Dem budget just hours after Osborne sat down in the House of Commons.

Speakers including representatives of the Wales regional council of the Communication Workers Union, PCS Wales, Unison, UCU, NASUWT, Swansea trades council and Youth Fight for Jobs all condemned the savage assault on working people by this new government.

Rob Williams, Unite convenor at Linamar, reminded the rally that Margaret Thatcher had seemed invincible when she implemented the poll tax. “But Thatcher was defeated by our movement and the poll tax was gone and Thatcher was gone,” he said, “and we can do the same again to stop these terrible attacks.”

“We will not accept the cutting of a single job or a single welfare service to pay for the bankers’ crisis.” That was the message from over 200 local trade unionists who came together to rally in central Portsmouth as George Osborne commended his savage cuts budget to parliament.

The rally was called by the Portsmouth Trade Unionist and Socialist Coalition (TUSC) and organised through Portsmouth trades council, whose chair, Mick Tosh, stood as the TUSC candidate in Portsmouth North.

The event brought together local RMT, CWU, PCS, Unison and Unite union members, as well as supporters of TUSC and activists from the Socialist Party.

Speakers, including Mick and trades council delegates from both Portsmouth and the Isle of Wight, were clear that their union members were prepared to take a stand against the severest programme of cuts in a generation and pledged to support public sector workers who will be the first to feel the force of those attacks.

PCS members in Durham held an emergency budget day demonstration on Millburngate Bridge, outside the Identity and Passport Service building.

The demonstration was arranged as part of the national PCS and Public Service Alliance campaigns against public service cuts and public sector job losses.

Several hundred Myth Buster leaflets were distributed to the general public, and received massive support from passers-by and from the traffic over the bridge.

The demo was covered extensively by local and national media, with stories and interviews on ITV Tyne Tees News, BBC Radio Newcastle, Metro Radio, and various local newspapers printed stories the next day.

PCS reps also attended the Public Sector Rally in Newcastle during the afternoon of the same day. 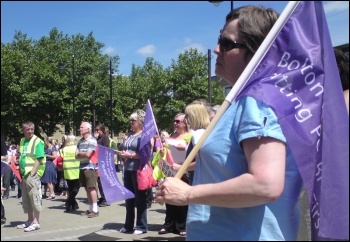 Up to 200 people attended for all or part of the lunchtime protest. The protest received a great deal of positive coverage on various radio stations and in the local press.

There were numerous placards as well as around one hundred red cards saying “give cuts the red card”. The feeling of the rally was that this was only the start of what needs to be a much bigger campaign.

A successful protest was jointly organised by North Staffordshire Shop Stewards Network, Youth Fight for Jobs and Stoke Socialist Party against the government’s cuts on budget day, 22 June, which got coverage in the local paper and a live interview on BBC Radio Stoke.

Trade union members from Unison, CWU and UCU took part and hundreds of people signed our petition against the cuts.

Eighty three copies of The Socialist were sold and hundreds of leaflets were given out, including CWU leaflets explaining why telecoms workers are balloting for strike action.

About 200 trade unionists attended the Birmingham demonstration against the Con-Dem government’s budget, outside the government office for the West Midlands.

The protest was lively with much chanting going on. Speakers included people from the local trade union movement and people involved in groups that will be directly affected by the budget cuts. I spoke as a Socialist Party member and a BT worker.

The demonstration was shown live by both BBC and ITV regional television news programmes.