'£3 a day is exploitation for profit' 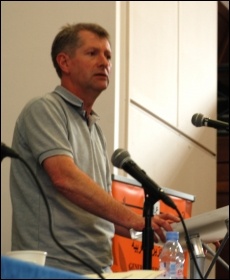 Dozens of inmates at Prescoed prison in Monmouthshire are being bussed out to a call centre to work for just £3 a day - 6% of the minimum wage.

The Socialist spoke to PJ McParlin, national chair of the POA, about the prison officer union's attitude to this and Tory justice secretary Ken Clarke's aim of having 20,000 prisoners working within ten years.

A company is bussing out inmates to work in a call centre. What is the POA's response?

I know some people don't have much sympathy for prisoners but they're not all mass murderers or people who have committed horrendous crimes - they're mostly people who've made a mistake. A lot of them have had appalling upbringings and now the state is exploiting them.

It would be bad enough if it was £3 an hour but £3 a day can be nothing else but exploitation to make profit.

At £3 a day, you're going to impinge on outside work. For that reason the POA, NAPO, the lecturers' union and the TUC have rejected the government's protocol because we don't believe that it gives the safeguards that are necessary.

What does the POA think about Ken Clarke's aim to double the number of prison workers within ten years?

We think right idea, wrong route. They should be concentrating on education and addiction therapy. If you can't read the safety notice then there's an immediate problem. If you're addicted to drugs, alcohol, or whatever, there's a problem in being safe in work.

They've paid a lot of lip-service to diverting people with mental health issues, because prison's not the place for them. Last year they trumpeted that they'd spent £600,000 on training prison officers in mental health issues. That might be a lot of money to you and me, but in the reality of the system it's absolutely nothing. They need to be diverting people away from prison who shouldn't be in prison.

Within these prison factories, they're talking about replicating outside work. A lot of prisoners have medical issues so they need to see the doctor or a nurse on a daily basis. That has to be moved to the evening. You've got to have recreation for any worker - that has to be moved to the evening. The evening is when the number of prison staff - prison officers, probation officers, nurses and so on - is at its minimum. Turning all that round has a cost and I don't think they've got the money to do it.

Do you think there's a case for some training and other rehabilitation to limit reoffending?

To a great extent that work happens now. But the problem that prevents proper rehabilitation in prisons is the cost. They're closing prisons - it's a government policy. Ken Clarke uses the word 'superfluous' which we wouldn't recognise. Of the 135 prisons in England and Wales, at the end of April 85 of them were overcrowded. If they really believe in rehabilitation, Clarke would end overcrowding, which would allow staff to interact and work with offenders.

Last year they closed HMP Latchmere House in London. They closed it because the land value in Richmond was, I imagine, very high. That was the best performing prison in the United Kingdom in terms of rehabilitation.

How is the POA working with other trade unions?

We took action on 10 May alongside other trade unions who are still opposing the pension proposals. That was a brave step - my members haven't got the right to take industrial action. But if the issue is right we have to take action. The retirement age of 68 is wrong for a schoolteacher, it's wrong for somebody digging a road and it's certainly wrong for prison officers in the charged atmosphere of the prisons.

We were pleased last year to take to the TUC a motion about the 40-hour work in prisons initiative of the government. We've worked closely with other unions in the criminal justice system, and also support the National Shop Stewards Network.