For workers, young people, the disabled and the unemployed, the lost decade since 2007 has been the equivalent of a Mark II Great Depression

Still recovering from the last crisis? Hold on to your wallet, Britain's bankers are storing up another one - £200 billion of consumer debt

Nationalise the banks and top corporations: Over half of Britain's richest firms could immediately wipe out the deficit in their pension schemes if they were willing to prioritise former workers over investors.

The banksters are at it again. Despite huge public anger at their role in the financial crisis of 2007-8 it seems no lessons have been learned. A new report warns that "we're sailing blindly into a second global financial crisis."

Fiddling finance capital in the dock

The trial and conviction of former UBS and Citigroup trader, Tom Hayes, has revealed the huge scale of the 2012 Libor rate-fixing scandal perpetrated by the major banks.

The ongoing trial of former UBS and Citigroup trader, Tom Hayes, has revealed the huge scale of the 2012 Libor rate fixing scandal perpetrated by the major banks

The government has brought forward the second phase of its 'Help to Buy' scheme that subsidises low deposit (higher risk) mortgages on houses worth up to £600,000, writes Paul Kershaw. 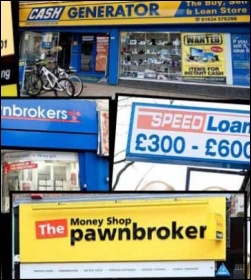 What recovey? Pawnbrokers and loan sharks proliferate , photo by Photomontage The Socialist

The media is lauding an economic recovery. Whether there is one and whether it has substance is discussed in the articles below.

What's wonga with the Office of Fair Trading?

Like a drugged watchdog, the Office Of Fair Trading has finally, very slowly, woken up to the disgusting behaviour of the short-term high-interest loan sharks...

Lovingly sacked...: THE FINEST writing paper, using only the finest ink, lovingly folded into an immaculate white envelope... This is no ordinary P45, this is a Marks and Spencer P45!...

Years of frenzied speculation on commodity markets: We have been hit by a tsunami of energy price rises. A flood of speculative activity in oil markets has produced a huge bubble that will inevitably collapse in coming months. Lynn Walsh investigates.

Darling's 'more of the same' budget

Editorial: "The most wrenching since the end of the second world war" is how Alan Greenspan, ex-head of the US Federal Reserve, described the current crisis engulfing the US economy...