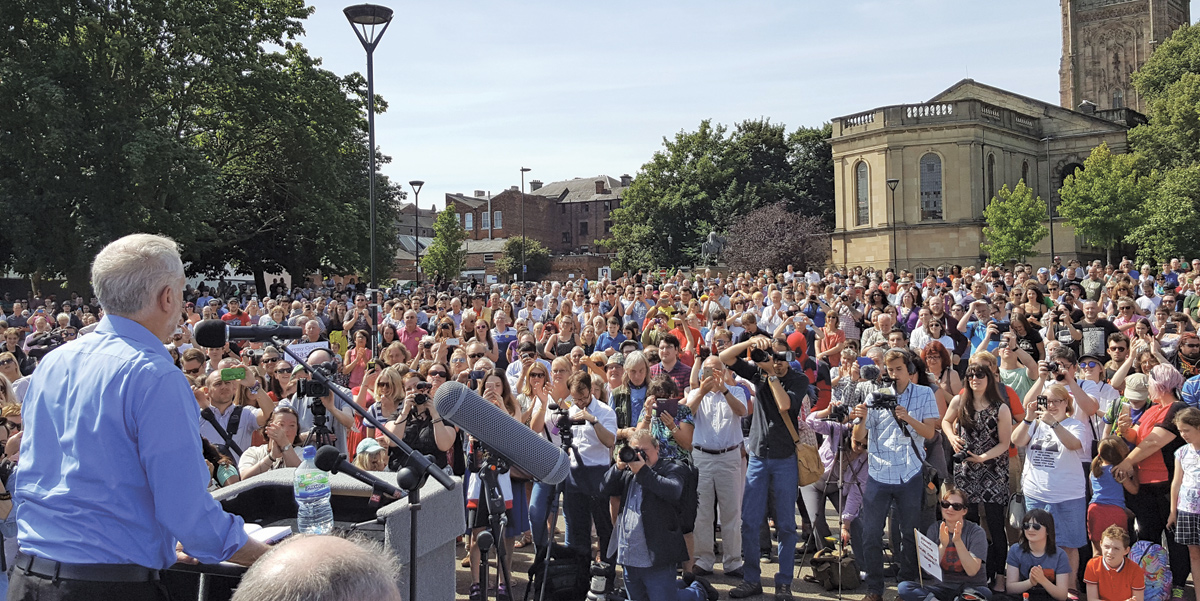 Editorial of the Socialist, issue 938 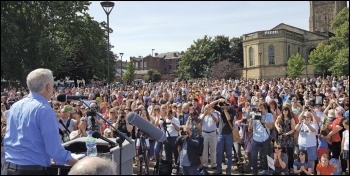 Jeremy Corbyn speaking to one of many mass audiences, photo Steve Score   (Click to enlarge: opens in new window)

The dramatic byelections that reached their conclusion on 23 February were initially triggered by the resignation of two Blairite MPs – Tristram Hunt and Jamie Reed. Each of these men chose to exchange their parliamentary seat for a fat-cat executive job. But it wouldn’t be accurate to ascribe personal advancement as the sole motivation for the resignations. Clearly there was also a political agenda at work. Both Hunt and Reed hoped that these contests could provide a fresh opportunity for the Labour right to oust Jeremy Corbyn as leader of the Labour Party.

In the event the mixed results, with Labour retaining its seat in Stoke Central but losing Copeland to the Tories, do not appear to have given the Blairites sufficient confidence to attempt a further coup at this point. Even so, Tom Watson’s strategy of slow strangulation – attempting to ‘hem-in’ and paralyse Corbyn with the hope of forcing his resignation – is continuing to intensify.

Over the subsequent weekend, a barrage of abuse was aimed at Jeremy. The whole of the capitalist media, the majority of the Parliamentary Labour Party and a range of discredited political figures, have all joined in the chorus of attacks.

A number of right-wing trade union leaders have also jumped on the anti-Corbyn bandwagon. This includes Dave Prentis, the general secretary of Unison, John Hannett, leader of Usdaw, and Gerard Coyne, who is being backed to the hilt by the establishment in his attempt to oust Len Mcluskey as general secretary of Unite the Union.

Indeed, this relentless anti-Corbyn campaign by the Labour right was a big factor in the byelection results themselves. Tony Blair’s personal intervention, attacking Corbyn and setting out a case to reverse the EU referendum result, was a deliberate act of sabotage. It was specifically timed to coincide with the final stretch of the byelection campaigns.

But in truth it is Blair’s own toxic legacy that has led to the steady decline of the Labour vote in these seats, both of which could once have been labelled Labour ‘heartlands’. Under the leadership of Blair, Brown and Miliband, Labour’s Copeland majority was reduced from 11,996 in 1997 to 2,564 in 2015. This had already had the effect of turning the seat, held by the party since 1935, into a marginal one.

Similarly, while Labour had retained a more substantial majority in Stoke Central, its margin had declined on an even greater scale during this period. In 1997 the Labour candidate, Mark Fisher, received 26,662 votes, a majority of 19,924. This fell to 12,220 for Tristram Hunt in 2015, a majority of 5,179; and now Gareth Snell has polled just 7,853 votes in the byelection, a majority of 2,620. It is the gross betrayals of New Labour politicians both at a national and at a local level, where they have been responsible for devastating council cuts, that has allowed a space for the populist right to gain ground.

Nevertheless, Labour’s victory this week has dealt a significant blow to Paul Nuttall’s Ukip, that lost the Stoke Central election despite an ‘all-out’ campaign in an area in which EU ‘leave’ voters outnumbered those who backed ‘remain’ by more than two to one. Nuttall’s alleged lies over his address, and more appallingly over the Hillsborough disaster – which was compounded by the deeply offensive comments of Ukip donor Aaron Banks – clearly contributed to this.

That said, Ukip’s failure to make a substantial breakthrough in Stoke serves as a reminder that the vote to leave the EU was no endorsement of the bigoted politics of Farage and Co. Overwhelmingly, it was an expression of bitter class anger. No wonder that people in Stoke, which has suffered immensely from decades of de-industrialisation, austerity and poverty wages, voted by such a large majority in the referendum to strike a blow against the Tories and the establishment.

That’s why Jeremy Corbyn’s early concession to the right in his own party, retreating from his historic position of opposing the European Union on the basis that it is a capitalist club that acts in the interests of big business, was such a serious mistake. Had he stuck to his guns and led an internationalist exit campaign on an independent pro-working class basis, it could have transformed the political situation and severely undermined the bigoted divide-and-rule approach of Ukip.

Despite this, Corbyn’s election and re-election as Labour leader showed the deep-going desire that exists for a break with the politics of Blairism. John McDonnell was correct when he wrote in an article published on Sunday that the campaign of attacks on Corbyn amount to an attempt at a ‘soft coup’. However, in the view of the Socialist Party, he and John McDonnell have so far failed to draw the necessary conclusions from this.

This is reflected in the fact that John McDonnell quickly retreated on his comments when they were flagged up in the mainstream media and drew attack from the right. An almost constant sense that Corbyn and his few parliamentary allies are retreating under fire is only serving to embolden their right-wing adversaries who increasingly scent blood.

Since Corbyn’s second victory as Labour leader in September 2016, the membership of the Labour Party has swelled to more than half a million people. The vast majority of these were freshly enthused by the anti-austerity, anti-war stance taken by Jeremy and furious at the persistent attempts of the right to undermine this.

Despite his widespread support among the membership, the vast majority of Labour’s MPs, councillors and bureaucratic machinery remain implacably opposed to his leadership.

Notwithstanding what will be claimed in the wake of these byelections, this opposition does not stem fundamentally from concern about Corbyn’s personal appeal or electability. Indeed, if that were their primary concern, they would not be wasting so much energy in actions which serve to undermine these very things.

The reality is that this is about the far more fundamental question of what the Labour Party is for – in whose class interests it should stand. The New Labour project was designed to break any influence which working class people were able to have over the party – to make it a ‘safe pair of hands’ for the capitalist class. Corbyn’s leadership, and the huge support that it generated, threatens to fatally undermine this project. This explains the vicious consistency of the campaign being waged by the capitalist establishment against Corbyn.

Lack of clarity and appeal

But Jeremy is making a serious mistake if he thinks that a ‘compromise’ can be reached with the right within the party. In fact, since his election win, the only compromising there has been has come from the side of the left. This has contributed to the utter confusion felt by a large section of working class people as to what Labour actually stands for.

The very popular policies which Corbyn was elected on – the renationalisation of the railways, a £10 an hour minimum wage, and so on – have been muffled by the right so as to lose their force. The strategy of appeasement, which has characterised Corbyn’s leadership, will only demoralise his supporters and further confuse and disorientate the wider working class.

In Copeland, the Tories (despite being deeply divided themselves) were able to exploit this lack of clarity. In particular, they attempted to stoke fears that Jeremy Corbyn’s opposition to nuclear power could lead to Labour allowing thousands of jobs to go in an area in which a nuclear power plant is the largest employer. Had Labour advanced a clear programme on the issue – with nationalisation of the energy companies and a guarantee of no job losses at its core – this would have helped cut across this cynical ploy by the Tories.

The fact that neither Gareth Snell, the candidate in Stoke Central, nor Gillian Troughton in Copeland, were supporters of Corbyn is a result of the failure to organise the hundreds of thousands of people who have joined Labour to act effectively against the right.

An effective fight would include reintroducing mandatory re-selection of MPs, to give Labour Party members a democratic say in who represents them in elections.

The utterly undemocratic, top-down constitution of Momentum, as well as its leadership’s policy of excluding socialists and mirroring the Labour machinery‘s witch-hunting policies, mean that organisation is not up to task.

These byelection results will be used by the right to attempt to tighten their grip and further undermine Corbyn’s leadership. Only a change in course by Corbyn, with a ferocious campaign to drive out the Blairites and re-found the Labour Party on a genuinely democratic basis, would secure his position as Labour leader and enable him to deliver urgently needed anti-austerity and socialist policies.

NB: The sentences in italics are updates that were added to the online version of this editorial on 28.2.17

This version of this article was first posted on the Socialist Party website on 24 February 2017 and may vary slightly from the version subsequently printed in The Socialist.