Fighting for liberation and socialism 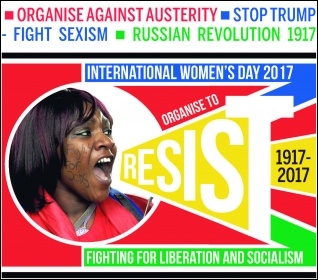 This year's International Women's Day commemorates the 100th anniversary of the heroic struggle of women textile workers in St Peterburg who walked out in unofficial strike action in 1917, demanding bread and herrings to feed their families. That strike marked the start of the Russian revolution, a struggle against the oppressive monarchy but also against the capitalist system.

100 years later women are still suffering under capitalism. The impact of austerity has been disproportionate on women. We make up the majority of the public sector workforce facing job cuts.

We rely on child benefits, maternity pay and flexible working to maintain a degree of financial independence while raising our children, all of which are now under attack.

Access to contraception, safe abortions and safe childbirth are all threatened with the massive £22 billion scheduled cuts to the NHS.

We are the most likely to take on caring for the elderly as public care homes are closed and privatised, and suffer increased domestic and sexual violence as women's refuges and rape crisis centres are shut down. We have many reasons to be angry, many reasons to move into action.

For the first time ever, women make up the majority of trade union members in this country. Making appeals to women that fighting austerity is necessary to fighting their own oppression is a key task for the trade unions.

The international movements clearly show that many women are open to methods traditionally used by workers' struggles, like strikes, and to socialist ideas. We need those women to join the Socialist Party to fight for an alternative in the struggles to come.

Lessons of the Russian revolution for women's struggle today

Protests and walkouts around the world for International Women's Day