Link to this page: https://www.socialistparty.org.uk/articles/25398 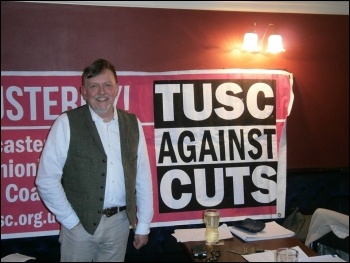 The calling of the general election had a big impact on the Doncaster mayoral election result with both Labour and the Tories increasing their votes by over 10,000 each compared with four years ago. The turnout was still low at 29% but those who did vote deserted smaller parties and independents to revert to the two main parliamentary parties.

That Socialist Party members initially felt disappointed at getting 1,531 first preference votes (2.4%) for Trade Unionist and Socialist Coalition (TUSC) candidate Steve Williams. But in the context of being squeezed by the two man parties, it was a measure of how good a response there had been to our campaign.

TUSC collected over 2,000 signatures demanding that Doncaster council does not sign up to the local Sustainability and Transformation Plan (STP) which will cut £140 million from the Doncaster and Bassetlaw Health and Social Care budget by 2020.

Nearly 1,000 signatures were collected to keep guards on trains in support of the RMT rail union's industrial action against driver-only operation on Northern Rail.

And hundreds signed up to make Donny a "£10 an hour town", backing Socialist Steve's pledge to scrap zero hours contracts and pay all council workers a minimum of £10 an hour and encourage private sector workers to join a union and 'fight for ten'.

In just five weeks, TUSC supporters conducted 30 public campaign activities resulting in 492 copies of the Socialist paper being sold and £695 being collected in donations. We were the only party to hold any public meetings, with 50 attending our eve of election rally with guest speaker TUSC national chairperson Dave Nellist (former Militant Labour MP).

Incumbent Labour mayor Ros Jones got just over 50% of the votes but there was no enthusiasm for her or Doncaster Labour after four years of carrying out over £100 million of Tory cuts which has decimated social care, neighbourhood services and youth services. No enthusiasm except at the Chamber of Commerce where Ros's mantra of Team Doncaster "growing the economy" was well received.

But here on the estates and streets of Doncaster, there are still no signs of 'trickle down' as absolute wages have fallen over the last five years and food banks and homelessness have increased. TUSC will continue to campaign to get the Tories out, for a Corbyn government and a socialist council to build on the support gained in this campaign in which our five council candidates received over 1,000 votes plus TUSC-supporting Independent Karen Mundin got 374.

This version of this article was first posted on the Socialist Party website on 8 May 2017 and may vary slightly from the version subsequently printed in The Socialist.