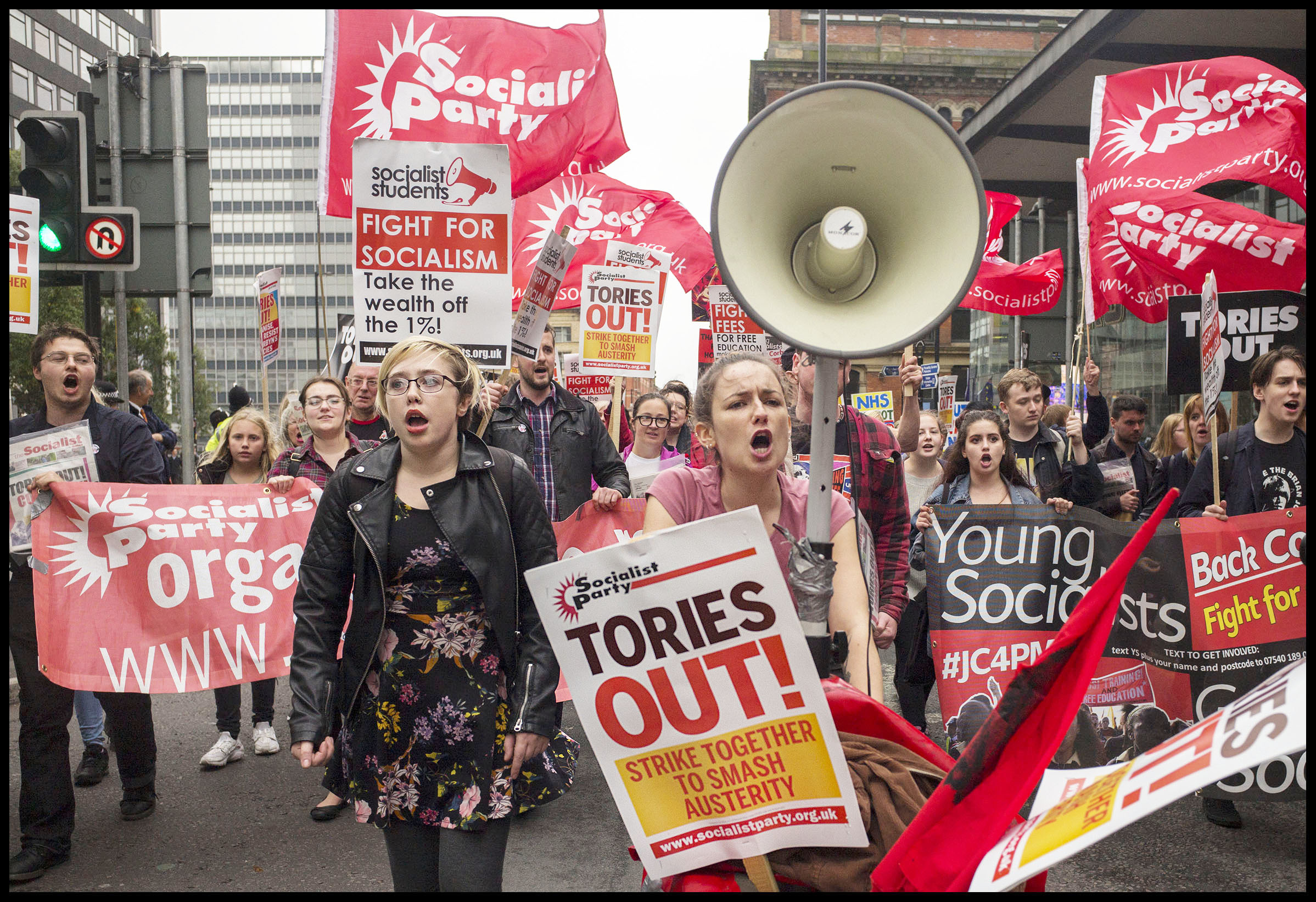 Editorial of the Socialist, issue 965 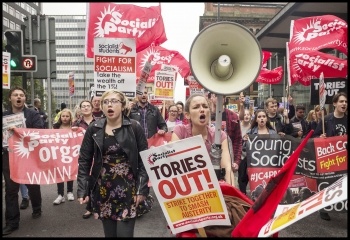 “Why would anybody, let alone a normal person, want to become a member of the Conservative Party?” Words spoken not by a Corbynista, but by a Tory! A meeting at the Tory Party conference, hosted by Conservative Home to discuss the general election disaster, seethed with anger. Former minister Edwina Currie blurted: “I’m beginning to lose the will to live.”

There can be no doubting the Tories are in an almighty crisis. What a contrast with the days when the Tories arrogantly thought Jeremy Corbyn was a perfect weak opponent. They egged on Labour’s right-wing Blairites in mocking and undermining Corbyn, imagining they would secure the un-electability of the Labour Party.

But the early general election was a hideous mistake for the Tory party. It was (for the Blairites as well) a total misjudgement of the mood of the mass of working class and many middle class people, in the same way the EU referendum was.

The EU referendum result was a crushing defeat for David Cameron and the Tory leadership, as the Socialist Party had predicted would be the result of a Brexit vote. Cameron disappeared off to a life of luxurious leisure leaving a car crash behind him.

The Tories are fundamentally split over Brexit. The main reason for May’s general election gamble was to try to increase her small majority in order to be able to see off challenges, in particular from her rabid hard-right backbenchers, and to secure a five-year term that would take the Tories past Brexit as far as possible.

Many others on the left, like commentator Owen Jones, were doom-laden, predicting that Jeremy Corbyn would be a disaster and that the Tories would be strengthened. But the Socialist Party argued that if Corbyn came out fighting, with socialist policies, it would be extremely popular. Again, we were proved correct.

Theresa May is a leader in name only. She has lost control, paralysed by the disunity in her party. We are witnessing open debate among her MPs that she cannot last, and open defiance by Boris Johnson, who she hasn’t been able to sack because of the potential warfare that would lead to. Instead May is reduced to suggesting that strong leadership is all about having a team of different voices! 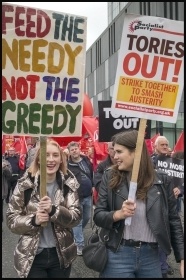 Some Tories might dream of a new leader who can smooth everything over, keep the show on the road, and put Jeremy Corbyn back in his box. But May is only still in place because the party is so riven there is no obvious alternative candidate who could both hold the party together credibly enough to survive another general election, nor reliably represent the interests of big business.

Leading figures attack Johnson – Chancellor Philip Hammond said “no one is unsackable”; former secretary of state of education Nicky Morgan said Boris Johnson “had no place in a responsible government”; Scottish leader Ruth Davidson called for the party to “man up” and stop the leadership “psychodrama”. Nonetheless they are all trying to display themselves at their best in readiness for potential leadership challenges.

Meanwhile the pro-Brexit membership at Tory conference flock to hear arch-right-winger Jacob Rees-Mogg at fringe meetings. When asked if Johnson should be sacked, an audience reportedly chanted NO! Andrea Leadsom, former leadership contender, now leader of the House of Commons, called Johnson “fantastic”.

Johnson may be the most popular to succeed May among Tory members, but big business views his brand of Brexit with alarm, as do big swathes of the party. In reality the majority of big business want to stay in the Single Market, and would prefer political representatives who will either engineer Remain in all but name, or even rerun the referendum at a later stage to get the ‘right’ result.

So this is a crisis not just for the main capitalist party, but a crisis of political representation for the capitalists.

May heads a party which is less popular than Corbyn’s Labour in every section of the population other than the over-65s, and especially among young people. An Opinium survey found that only 21% of 18 to 29 year-olds support the Tories, and only 15% of 18 to 24 year-olds think the Tories represent “people like me”. Only 19% of people aged 18 to 34 think the Tories are on their side compared with 53% for Corbyn.

Research by think tank British Future also suggests that they lost as many as 28 seats due to only 19% of black and minority ethnic people supporting them.

Eric Pickles, former cabinet minister for communities, overseer of savage cuts, decries that they have no campaigners and wants to gather together a young team – ‘Activate UK’ is a so-far lamentable attempt to do this. The Campaign for Conservative Democracy estimates that their membership is below 100,000.

Just four months after ‘winning’ the general election, the party of government is reduced to discussing how they can eat into Labour’s support!

Desperately running after Corbyn’s manifesto, talking about “burning injustice”, May has been branded ‘Corbyn-lite’. But the weak promises on tuition fees and home ownership will not even begin to address the problems.

More fundamentally still, the Tories find themselves having to fight for the legitimacy of capitalism itself. In a Newsnight debate after Labour’s conference, ‘Is capitalism out of fashion’, no guest challenged the view that austerity was a fatal political decision, or that people are questioning capitalism and looking for an alternative.

The accepted mantra now seems to be that the viability of capitalism just needs to be explained. The argument goes ‘the Tories have assumed all the debates were settled in the 1980s but they’re not, we need to articulate what we haven’t for years’.

So Theresa May argued, in a speech to mark the 20th anniversary of the Bank of England’s independence, that “a free market economy, operating under the right rules and regulations, is the greatest agent of collective human progress ever created… That is unquestionably the best, and indeed the only sustainable, means of increasing the living standards of everyone in a country.”

She said on Radio 4’s Today programme, “Do we want a capitalist economy – which, if you look around the world, is the best way of improving people’s lives”. How is that a sustainable remark when eight people have as much wealth as half the world’s population? People “look around the world” and see poverty, war, terror, and environmental destruction. According to the World Economic Forum, young people (‘millennials’) in advanced capitalist countries are 43% worse off than their parents.

How can it be argued that capitalism works efficiently when thousands have lost their jobs, and 110,000 holiday makers are stranded, due to the collapse of Monarch airlines, requiring the “biggest ever peacetime repatriation”. When Ford Bridgend again faces closure; and when even the majority of Tory voters think that rail should be renationalised!

She might claim to want to “genuinely build a country that works for everyone” but the Tories’ problem is that people’s experience doesn’t match. Productivity has flatlined for ten years. Wages have fallen. A million jobs have gone in the public sector. The housing crisis is immense. Grenfell Tower stands as a horrific testament to all that is wrong with a profit-driven market system. And meanwhile the rich have doubled their wealth.

Capitalism is in crisis and the Tories don’t have the answers. As professor of economics Richard Wolff said in the Newsnight debate: “We’ve tried every form of capitalism, people want something else… Democratising isn’t containable within the capitalist shell.”

Of course none of the experts on that panel would accept that socialism could be the alternative. But the Corbyn phenomenon shows that even a glimpse of a socialist programme holds out huge hope for masses of people. Corbyn and McDonnell’s programme is modest, but when announcements are made, such as on PFI, they have an electric effect.

So much so that Tory spokespeople find themselves having to explicitly counter socialism. Chancellor Philip Hammond called Jeremy Corbyn “a clear and present danger” to prosperity. Jeremy Hunt called the prospect of a Corbyn government “probably the most dangerous left-wing government this country has ever seen.”

Hammond’s conference speech likening Corbyn’s policies to Cuba and Zimbabwe (and even North Korea on Radio 4) smacked of desperation – but is an indication of the attacks that a Corbyn-led government would face.

One of the factors that still holds the Tories together is the threat of a Corbyn government. As Jeremy Hunt said: “All I would say to anyone who might be eyeing a different job is that Jeremy Corbyn is also eyeing a different job. And if they don’t swing behind Theresa, who I think is doing a fantastic job in very difficult circumstances, they will just open the door to Jeremy Corbyn”.

It would be very difficult to sustain another new leader without calling a general election. That may or may not be enough to stay the hand of Tory rebels, who could decide that enough is enough, and that the risk of a period out of power while they attempt to regroup their party would be preferable to blundering on.

But the actions of their own MPs are not the only determinant of whether they will manage to hold on to power. As a minority government, reliant on the votes of the DUP, the Tories could be toppled at any time should the pressure from mass discontent – especially if that is organised into a mass movement – become great enough.

The demonstration outside the Tory party conference was only a small indicator of the mass anger. Imagine the size and effect of a demonstration if it were called by Corbyn, McDonnell and the trade unions, and properly built for with union resources. A national demo as a step to coordinated action to break the pay cap would have huge effect. A movement is needed that clearly aims to replace the Tories with a government in working class interests, with a socialist programme.

This version of this article was first posted on the Socialist Party website on 4 October 2017 and may vary slightly from the version subsequently printed in The Socialist.