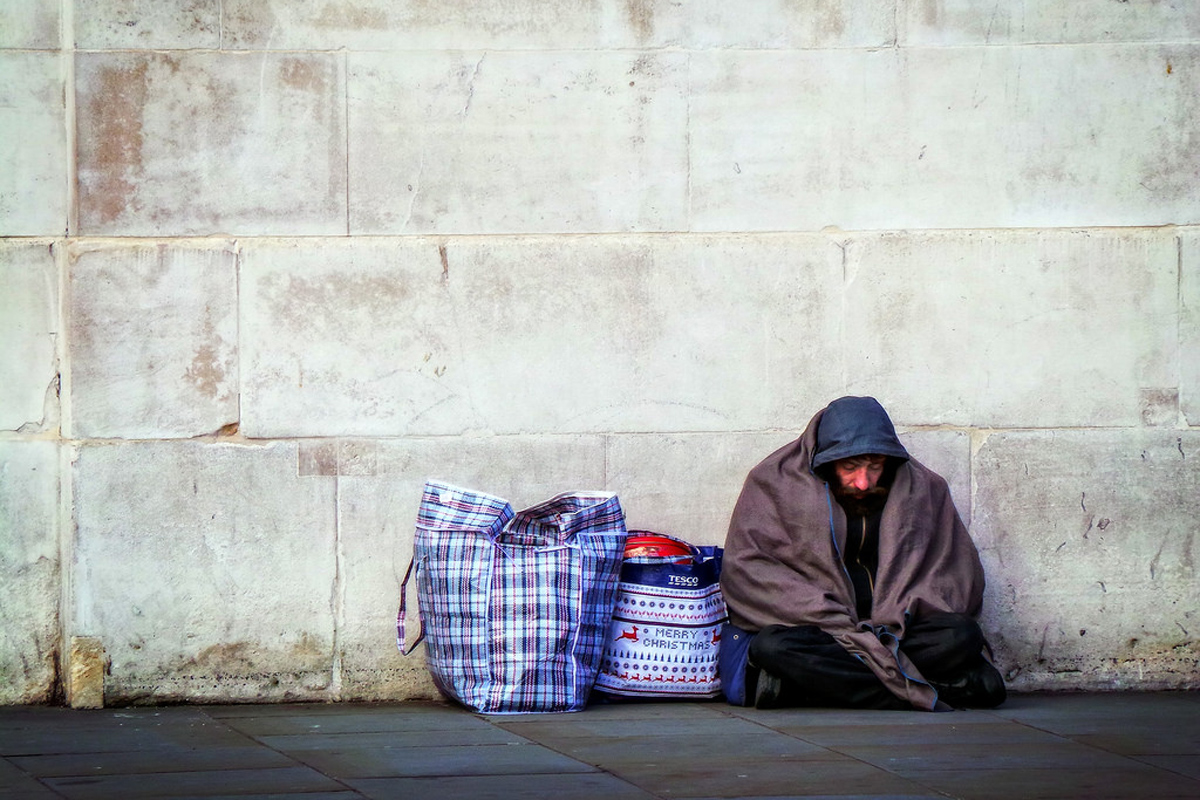 I was petitioning against Universal Credit on a campaign stall recently when an oldish bloke comes over – casually dressed, not scruffy, one arm on a crutch and carrying a plastic bag on the other. He signs the petition. When he comes to the address column he writes: NFA through UC. I ask him what he means – ‘No Fixed Abode through Universal Credit’.

Homeless, he spent the night in a bus shelter. The bag he is carrying contains all his possessions – his sleeping bag was stolen in the night. He tells me his life story. He’s 65 years old (looks older), went to grammar school, was in the army and the navy.

He tells me he’s counted 50 jobs he’s done in his life, such as Kelloggs in Trafford Park, engineering, working with chemicals. He’s always worked. He’s got his fifth interview for Universal Credit coming up. He thanks us for what we’re doing, shakes hands and leaves.

The benefits system in this country has utterly and completely failed this man. How many more like him? How many more will there be if this despicable government continues?

I read Jon Dale’s article in the Socialist (see ‘Blood transfusion scandal: put the profit system in the dock‘) which references “Labour’s right-wing minister of health, David Owen (who later split to form the Social Democratic Party)” and asked the Socialist Party members who sell me the Socialist newspaper to update Jon.

They said I should let everyone know. It’s my understanding that David Owen quietly re-joined the Labour Party and was permitted to vote in the first leadership election which Jeremy Corbyn won. Many of us on the left were not permitted to vote in that election because of our involvements in other parties. Something that has also been applied to the Socialist Party.

Lord Alan Sugar’s theatre of cruelty known as ‘The Apprentice’ has returned to the screens in another series. In the third episode the teams were set up to fail by being given the task of creating doughnuts for a high class market, when none of them knew a doughnut from their elbow. They had to learn to produce doughnuts without any training. The results reflected this lack of expertise.

The flaw is obvious. When Lord Sugar was appointed ‘Enterprise Tsar’ by Tony Blair his fallibility was all too clear. Questioned about the banking crisis his famous on-screen response was “oh God”.

Contestant Tom Bunday on the other hand, had a style of management which involved getting his team onside and consulting them about the task. He praised people who achieved instead of denouncing them as “a bloody disgrace” if they made a mistake.

Since the premise of the show is that team members stab each other in the back this attracted criticism from his own team members who insisted he was “not taking decisions.” And Lord Sugar made it perfectly clear that capitalism does not work like that.

So although the premise of the show is nonsensical it does provide some interesting insights into the capitalists of yesterday and tomorrow. As a lesson in making doughnuts, however, it falls down somewhat.

How much of my life have I spent looking for jobs? They talk of a shortage in construction, I get a gateman role and get laid off four days into a one-year contract and replaced by someone unskilled, but cheaper. The trend is that as every year goes by, it’s a pound an hour less than the previous year. Sod this!

The People’s Vote movement may feel vindicated by the hundreds of thousands of people who took to the streets of London on 20 October.

But in 2016, 17.4million people, including many of Britain’s most downtrodden, joined a collective electoral protest against the status-quo. Do Remainers, who claim to oppose the rise of the populist right, really not understand the risks of disenfranchising these people?

I am not speaking here to the elite – the Anna Soubrys or the Chuka Umunnas of the world. But to the many, particularly young people, who see the break-up of the EU in terms of their own sense of internationalism and solidarity with others across the trading bloc. Many who will not be aware of Jeremy Corbyn and the left’s historic and principled opposition the EU.

This is not a result of the Brexit vote, but of decades of neoliberal capitalist policies which have savaged the living conditions of Britain’s working and middle classes.

Decades when you couldn’t get a piece of paper between the policies of the two main political parties.

For much of the population, 2016 was the first time in a generation that they felt their vote would achieve something. Overturn this at everyone’s peril!