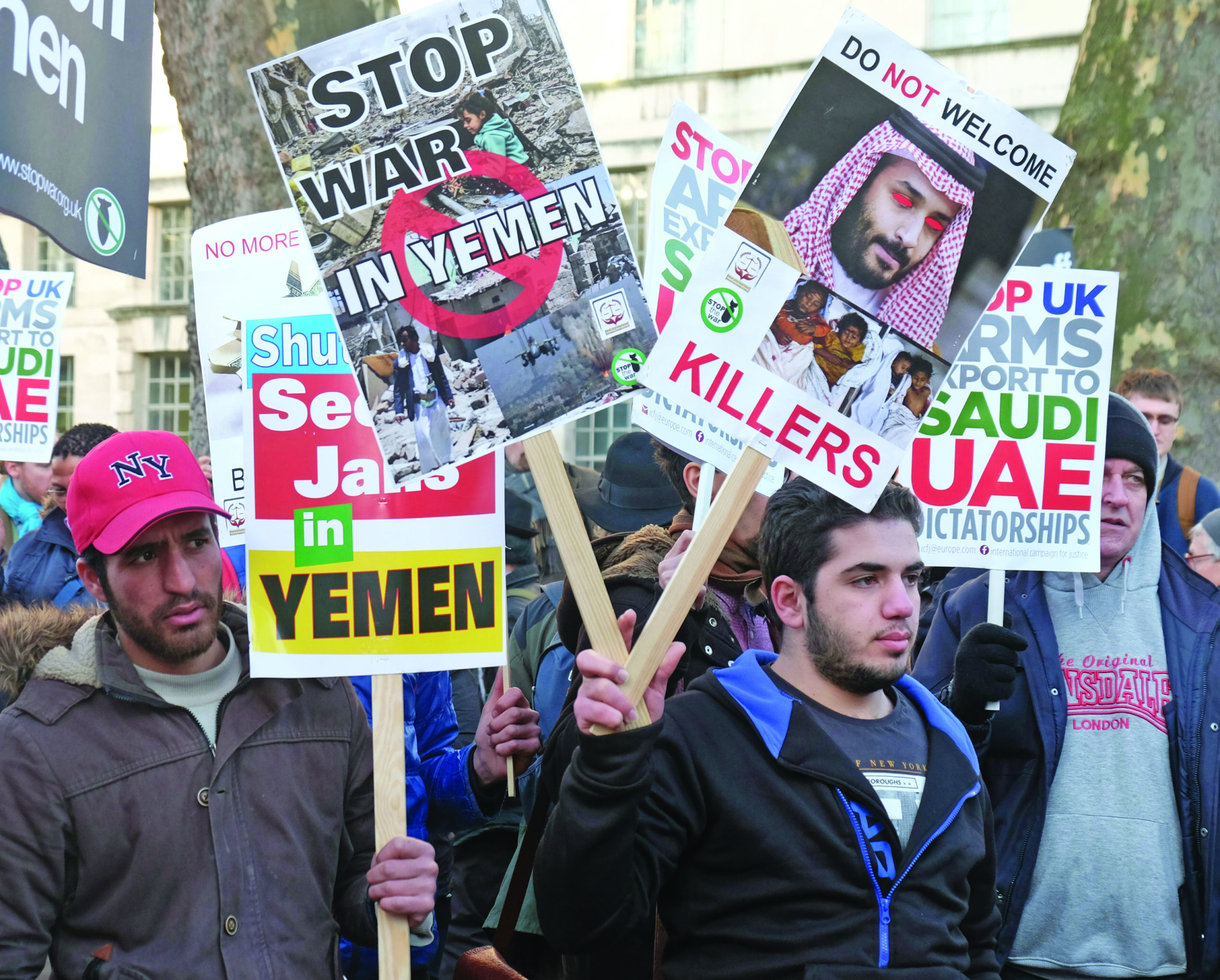 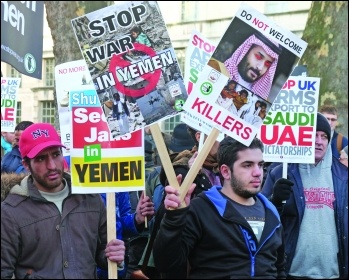 Donald Trump and Boris Johnson rallied round the murderous Saudi regime, which continues to prosecute a brutal war in Yemen, photo Alisdare Hickson/CC   (Click to enlarge: opens in new window)

The drone missile attacks on two oil installations in Saudi Arabia on 14 September threw more incendiary material into the volatility and instability of the Middle East. The world’s biggest crude oil processing plant was hit, immediately disabling over half of Saudi crude output – equivalent to about 5% of the global supply.

Certainly, it seemed unanticipated by the Saudi regime. This, the biggest arms purchaser in the world, didn’t have the necessary defences at the ready to stop the destructive attack, despite the fact that it was carried out by fairly low-tech missiles.

As well as an economic shock, this was a major humiliation for the Saudi monarchy – and the more so because it didn’t dare make any immediate military response.

However, this week at the UN general assembly Saudi representatives are seeking support from other countries for some kind of action against Iran, without having evidence that Iran – an ally of the Houthis – was directly involved in the attacks.

Saudi Arabia’s superpower ally, the US, has held back from a military response too, as it also did in June when one of its surveillance drones was brought down by Iran.

US secretary of state Mike Pompeo hastily visited Saudi Arabia and the UAE, stressing that Trump wanted a “peaceful resolution”. Part of this resolution, though, is more sanctions on Iran which will further devastate its economy and the health and wellbeing of the population.

So, for now, it’s a military ‘stalemate’ but one in which more clashes are likely. As well as the hit on a US drone in June, there were several explosions on oil tankers in the Gulf area in May and June.

Also, part of Trump’s calculations will be that although the US has become self-sufficient in oil due to its shale industry, sustained damage to global supplies would sent the oil price rocketing and increase the cost of fuel at US petrol stations.

It wants to maintain and build on that position but at the same time is facing a deepening economic crisis made worse by US-led sanctions – inflation has risen to 40%, making it an increasing struggle for most Iranian people to make ends meet.

The Iranian regime has been carrying out a vicious crackdown to try to curb the increased number of workers’ struggles in that country this year. Workers protesting against unpaid wages, poverty-level wages and privatisation have faced arrest and in some cases prison sentences of ten years of more.

None of the capitalist governments across the region are able to satisfy the basic needs of working people and the poor, including in Egypt and Iran, and increasingly in Saudi Arabia and the other Gulf states. It’s only a matter of time before massive protests again spread as they did on a vast scale in some countries of the Middle East and North Africa in 2011.