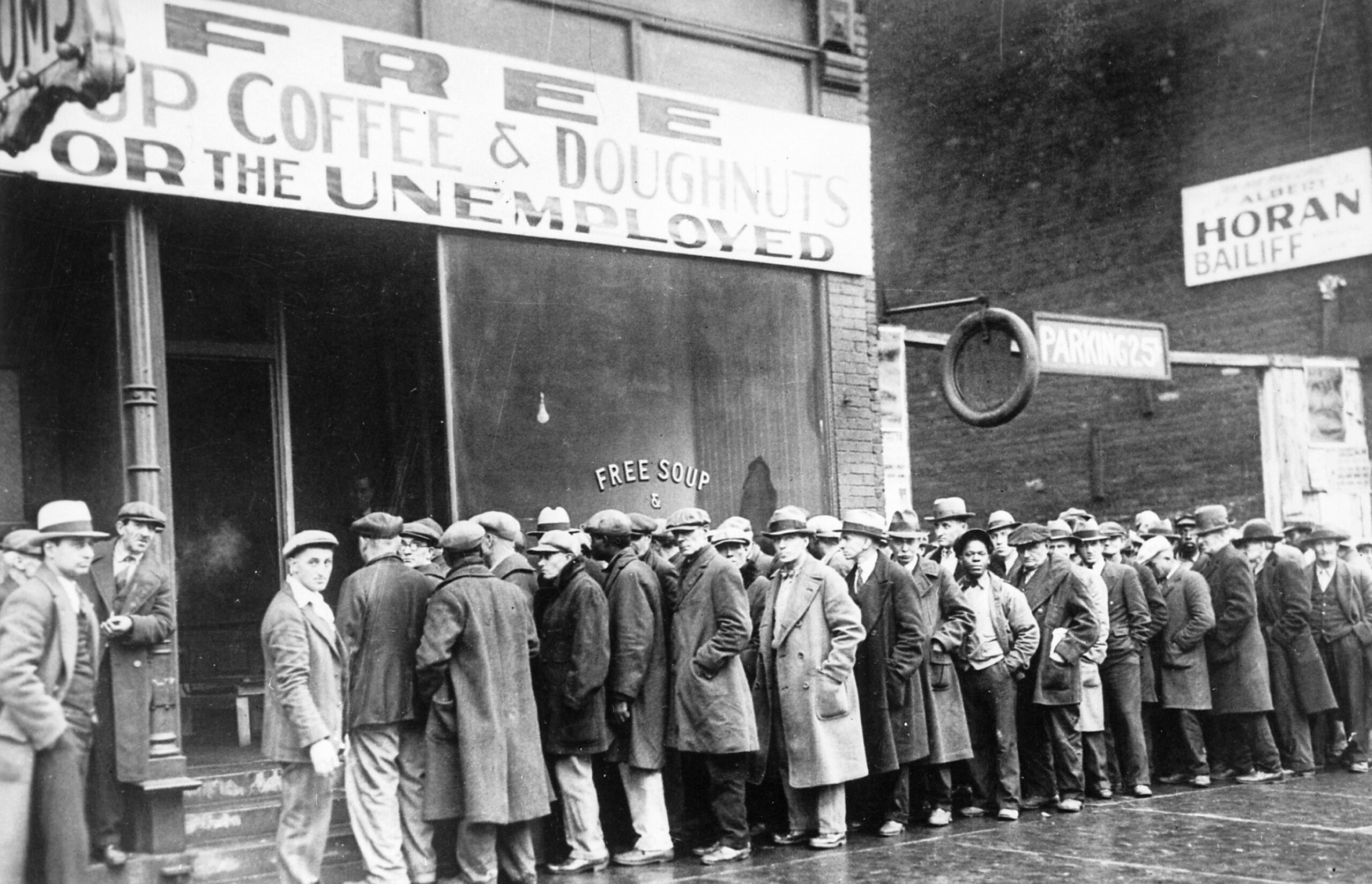 Home International The 1929 Wall Street Crash: When the capitalist system was on its...
Facebook
Twitter
WhatsApp
Email
Print 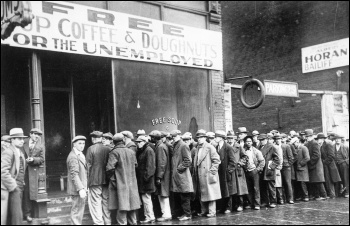 There was mass destitution and impoverishment of the poor and the unemployed   (Click to enlarge: opens in new window)

Ninety years ago the world was tipped into the ‘Great Depression’. The Wall Street Crash saw stock markets descend into free-fall while banks failed. The capitalist economy slumped and the nightmare of mass unemployment for the working class became a reality.

The Dow Jones stock market index of leading companies in New York collapsed by 25% in the five days following ‘Black Thursday’, 24 October 1929. By 1932 the market had lost 89% of its pre-crash level. The economist JK Galbraith described it as “the most devastating day in the history of the New York stock market… maybe in the history of markets.”

The 1929 crash, like the banking collapse in 2007-08, marked a definitive end to a credit-based boom, which had seen the growth of a huge bubble in the value of stocks and assets. The ‘roaring twenties’ had been a bonanza for the elite Wall Street speculators, with stocks rising between 400% and 500% in a decade.

But this was a boom for the rich and the speculators that completely bypassed the vast majority of the US working and middle class.

The collapse in share prices and the bursting of the speculative bubble exposed individuals, corporate America and the banking system to huge losses. Even economist JM Keynes, who predicted the crash, lost 80% of his investments when the collapse came.

Drunk on seeming success, the capitalist class and their economists were generally no more able to anticipate the 1929 crash than they were in 2007-08.

Galbraith – in his book The Great Crash 1929 – quotes US President Calvin Coolidge in December 1928 confidently declaring: “In the domestic field there is tranquillity and contentment… and the highest record of years of prosperity… [We] can regard the present with satisfaction and anticipate the future with optimism.”

Similarly, in the run up to the banking crash of the last decade, New Labour’s Chancellor Gordon Brown claimed to have abolished “boom and bust”.

The dominant ideology of the capitalist class was to let market forces ‘self-correct’ the ‘imbalances’ of the market. “Liquidate labour, liquidate stocks, liquidate the farmers, liquidate real estate… it will purge the rottenness out of the system”, was the brutal remedy prescribed by Andrew Mellon, the then US Treasury secretary to the Herbert Hoover administration.

Banks were allowed to collapse. In contrast, and learning from the Great Depression, after the banking crisis of 2007-08 trillions of dollars were thrown about in a desperate financial bailout by capitalist governments around the world. Large parts of the banking system were nationalised.

Quantitative Easing – ‘socialism for the rich’ – was introduced. However, these measures have not created a sustainable recovery (see ‘New recession fear stalks the world economy’ at socialistparty.org.uk).

But after 1929 it was capitalism that was almost liquidated. Between 1930 and 1932, one-third of the US economy was wiped out.

By 1931 wages in the US were half the value of 1925. To make matters worse there was no social security or government safety net and as a result there was mass destitution and impoverishment of the poor and the unemployed.

Some of the great works of American literature were written against the backdrop of the 1930s, including John Steinbeck’s Grapes of Wrath that depicted the horrendous conditions that faced the farmers and agricultural workers in the ‘Dust Bowl’ of the US.

Hundreds of Hoovervilles – shanty towns built by the homeless and destitute, named after the US president – sprung up across the US.

A breakdown of trade took place. Banking failures, devaluations and mass unemployment scarred Europe in the 1930s. Unemployment in Britain increased from one million to almost three million by 1931.

The election of US president Franklin D Roosevelt in 1932, however, saw a change in policy by the US ruling class in response to the depression. There was a growing fear that the economic catastrophe was bringing into question the legitimacy of the capitalist system.

1933-34 saw a wave of strikes, factory occupations, mass demonstrations and protests against the pauperisation of big sections of the population by the crisis.

A new radicalised and more militant generation of workers, including many who looked to the ideas of Trotskyism, led a number of important strikes and factory occupations as workers moved to try and win back some of what had been lost.

Hundreds of thousands of US workers moved into the new CIO trade union federation during this period.

Roosevelt’s New Deal was aimed at stabilising capitalism. He had no choice but to use US capitalism’s vast accumulated wealth to make concessions to the working class and the workers’ movement in order to stave off revolution.

A social security system was introduced as well as investment in public works to provide employment and a new set of rules and regulations for the banking system. In effect, it was an attempt to rebuild the largely damaged capitalist system through Keynesian measures ie massive state funding to boost economic growth.

However, these steps had a limited impact. Unemployment remained stubbornly high, between 10% and 15%, throughout the 1930s. It was only the shift of the US economy to a war footing that mopped up unemployment.

For the ruling classes the experience of that decade was a disaster. It had produced a massive economic collapse, the disruption of trade, collapsing profits. The rise of fascism in Germany, Italy and Spain followed the crash and the defeat of the workers’ movement. The end of World War Two saw a huge loss of capitalist influence globally as a result of the spreading and strengthening of the Stalinist planned economies.

Capitalist governments across the world, including the US, turned to Keynesian economic ideas in an effort to rebuild the shattered capitalist system. This helped to stabilise capitalism, for a period, and laid the basis for the post-war economic upswing that lasted until 1973.

Today, capitalism has been unable to fully recover from the crisis of 2007-08 and a new crisis is being prepared. On the basis of the profit system there is no way out of these periodic destructive cycles, with the majority of humanity and the planet paying the price.

Capitalism, however, will always cling on unless it is overthrown by a politically conscious movement of the working class. But the ideas of socialism and Marxism and the building of a mass workers’ movement to end rotting capitalism once and for all, will increasingly be seen as the only viable solution.

Left Books The bookshop of the Socialist Party

New and second-hand books and pamphlets