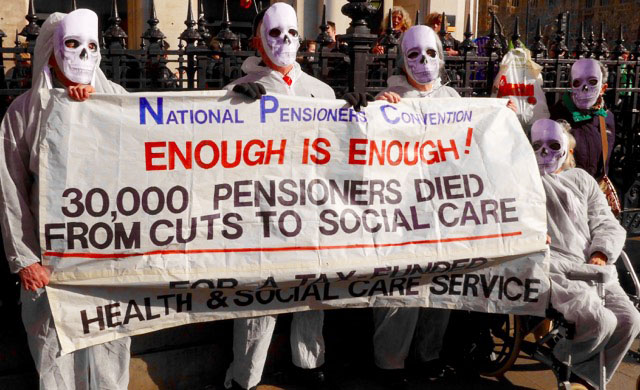 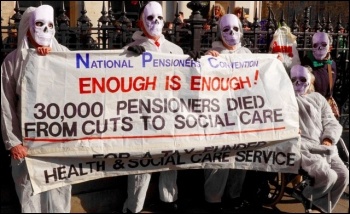 Social care has been in crisis for decades. Successive governments have deliberately diverted resources from care provision into the pockets of big business through privatisation. Despite the hype, Boris Johnson’s new health and social care plans won’t radically alter things.

With 66 references to ‘Covid’ and ‘pandemic’ in just 29 pages of the government’s plans, it’s clear they are little more than a sticking plaster for current events, rather than the surgery needed for a chronically underfunded sector.

The Tories openly broke election pledges from less than two years ago by raising national insurance contributions (NICs) next year. This will hit the poorest hardest, including those already suffering Universal Credit cuts. People with an annual income above £50,000 pay much less as a proportion of their income, and NICs are not paid on unearned income, such as interest, dividends or rents.

Far from tackling the crisis, just £5.4 billion of the increased revenue from higher taxation is allocated to social care over three years. The rest goes directly to the NHS, and itself is not enough to cover the £10 billion extra for 2022-3 called for by NHS Providers.

The Treasury has acknowledged that the £5.4 billion is largely for “implementing” the new caps, and ensuring councils pay more to private care home providers. Local authorities, unable to foot the bill, are encouraged by the government to raise council tax to plug the gap.

Social care is close to meltdown. Staff vacancies, already around 120,000, are set to rocket to 170,000 by the year end because of the mandatory vaccination in care homes legislation. 95% of providers told ITV news they are unable to take on all new clients and 30% of providers are handing back some, or all, existing contracts to local authorities because they can no longer fulfil them. Nearly 300,000 people are awaiting social care assessments, care and support, up by 26% over the last three months.

In 1979, two-thirds of care was NHS or council-run, but now 84% is for-profit. The largest three owners of care homes in the UK are private equity companies, whose very existence is solely to accumulate profit, yet the workforce is one of the lowest paid, with good working conditions virtually non-existent. These companies must be brought into democratic public ownership, with compensation only on the basis of proven need.

We need an integrated, nationalised health and care service, paid for by the super-rich, many of whom have profited from privatised care and exploiting care workers.