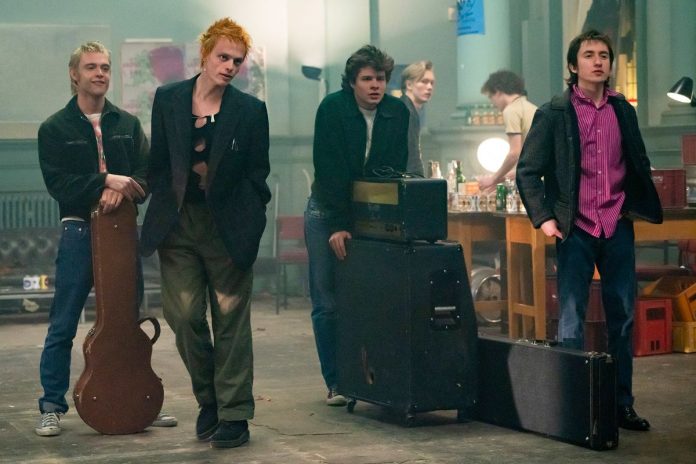 I’ll be honest and say I went into this with a bias. Musically, while undeniably foundational, I always found the Sex Pistols lacking compared to their contemporaries.

They weren’t as ferocious as Wire, as nimble as Gang of Four, or as experimental as This Heat. All of those are explicitly leftist and don’t share Johnny Rotten’s dodgy, ‘Country Life butter’ politics.

The other reason for my bias against the Sex Pistols is their charlatanism. Masterminded by middle-class artists like Malcom McLaren, Sex Pistols used punk and class politics to generate sales and press attention.

I expected ‘Pistol’ to be another naval-gazing Hollywood cash grab. But director Danny Boyle recognises the revolutionary facade of the Sex Pistols, and the show is all the better for it.

The series is conscious and careful to highlight punk as something not born out of the class tensions of the 1970s, but a new form of artistic expression curated by middle-class elites.

The sets, soundtrack and dialogue reference precursor, avant-garde artists to the Pistols. These bands cut their teeth at the famed CBGB music club in New York, which laid the foundation for the Punk movement.

By 1975, artists like Vivienne Westwood and Malcom McLaren – played with exceptional sliminess by Thomas Brodie-Sangster – took the earnesty of Punk, which attracted the working class, and transformed it into a new art form to be discussed in middle-class, liberal artistic elite circles. An art form as a remedy for the lofty pretentiousness of Prog and the vapidity of disco. Neither of these spoke to the working classes about their material conditions, which good art often does.

It isn’t any wonder the Sex Pistols themselves objected to the show’s airing. Danny Boyle recognises the band for what they were – little capitalists using ‘revolution’ as a carefully manufactured product to sell to the masses.

While there aren’t any surprises in Pistol to the storytelling formula, Boyle’s unique perspective on the Pistols and their contemporaries sets it apart from other more self-congratulatory biopics.

The performances are top-notch. Sydney Chandler’s subtle emoting as Chrisse Hynde and Anson Boon channelling Rotten’s stage presence are particular highlights. All of which are brought to life in a 1970s film aesthetic.

The 4:3 aspect ratio evokes Quadrophenia, and the blocking of people moving in front of the camera in pubs feels like a kitchen-sink, Ken Loach flick. Although the Hollywood-esque rapid fire cuts and edits in the action are detrimental.

Pistol it is a generic biopic. Nothing you haven’t seen before. But Boyle’s seasoned directional choices and aesthetic, and the fresh take in acknowledging Sex Pistols as phonies, make it worth watching.