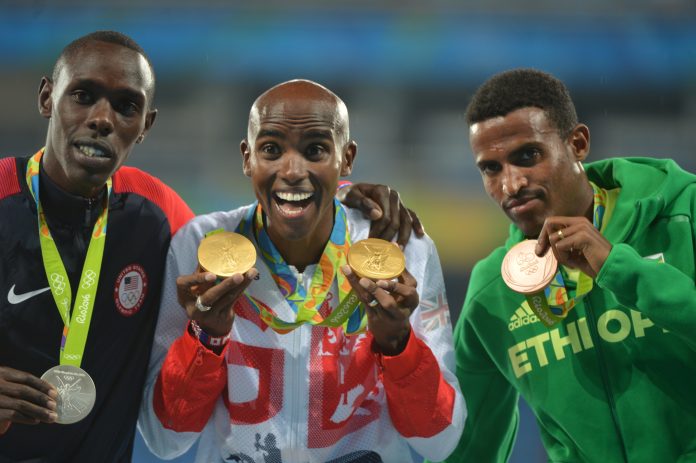 I’ve been a fan and follower of Mo before he was Mo. For working-class kids like me who ran, Mo was a hero, even before anyone outside the running world knew him.

He was the young guy who we would cheer on. He won pretty much every domestic cross-country race. We got excited when we saw him on TV trying to make the step into the international stage, because he was one of our own who might one day mix it with the best runners in the world.

The fact that he was a refugee only mattered to a few old snobs left over in posh clubs. Mo spoke like us, joked like us, and came from the same schools and areas as us.

I was lucky and privileged enough to train and run alongside him a few times as a teenager at the UK Athletics Endurance HQ in Teddington in south west London. I would often run to my cousin’s, who lived near there, where Mo trained, just so I could say I saw him to my mates!

This programme documents Mo opening up about his hidden past and journey of how he arrived in Britain. “The real story is I was born in Somaliland, north of Somalia, as Hussein Abdi Kahin. Despite what I’ve said in the past, my parents never lived in the UK.

“When I was four, my dad was killed in the civil war. As a family we were torn apart. I was separated from my mother, and I was brought into the UK illegally under the name of another child – Mohamed Farah.”

Taken to live in Hounslow, west London, Mo was forced to work as a domestic servant. He was eventually able to go to school.

With little English, and still working as a slave, Mo struggled enormously. His teachers worried about his behaviour, he was unwashed and dirty, and his so-called parents never responded to communication.

His only solace was sport, especially running. His PE teacher, Alan Watkinson, describes the freedom Mo experienced when given a field to run around, unleashing a phenomenal talent. Mo won his first race and just kept on winning.

Mo opened up to his PE teacher. He was able to help Mo move in with one of his mate’s mum, where he was treated as part of the family.

Despite hypocritical Tory MPs calling Mo brave, the same situation today could result in a deportation flight to Rwanda or a bus ride to a detention centre. Priti Patel and other Tories were no doubt shaking in anger when they found out that Mo was granted British citizenship and a passport aged 16 after a long-waged battle by his teacher to allow him to travel to other countries to run for the British team.

Mo went on to be one of the greatest distance runners ever. One of only a handful of people to win the 10,000 and 5,000 metre double at the Olympics twice.

In the documentary, Mo finds out that officially over 10,000 people were trafficked to the UK last year. But the real figure is likely to be over 100,000, not including the thousands also attempting to escape war and poverty for a better life in Britain.

Mo recounts towards the end that he is no different to the asylum seekers and refugees, and victims of trafficking and slavery, that are hated by the press and politicians. Mo has taken a risk revealing his true story. He even seeks guidance from lawyers in the show to discuss the potential consequences of possible deportation.

We need to be outraged at the politicians and commentators who have spent years cheering on hate towards migrants and refugees. They have allowed the Windrush scandal and others to take place. How many gold medals do you have to win to pass racist immigration laws?

Control of asylum decisions cannot be left in the hands of this callous government. We demand that elected committees of ordinary working people, including representatives of migrant organisations and the trade unions, have the right to review asylum cases and grant asylum.

The only way to permanently end the refugee crisis is to fight for a democratic socialist world. On the basis of capitalism, there will always be people forced to flee their country, not by choice but out of desperation as a result of war, environmental catastrophe and starvation.

There’s an aspect to Mo’s life that isn’t touched on in the show. Can ordinary working-class people afford to live next to the fields that Mo first ran on? And the citywide comprehensive school cross country league races are diminishing every year.

While Mo’s London 2012 victory was inspirational to so many working-class kids, the so-called Olympic legacy has been a legacy of money only thrown at elite sport. That ignores the greatest contributor to elite sport, and the much wider benefits of sport and exercise – mass participation.

Sports funding elitism has even reached a stage where some athletes were denied selection for the Rio and Tokyo Olympics, despite having qualifying times, because they weren’t deemed ‘medal winners’.

The Socialist Party campaigns for the funding, facilities and time for everyone to take part in sports. Cuts and sell-offs of school and community facilities should be reversed. We call for the nationalisation of sport and exercise facilities for the benefit of everyone, and for investment in free, high-quality sport aimed at participation at every level.

Today, low wages and long working hours are still an insuperable barrier to many aspiring athletes. A socialist society could see a complete change in how sport is organised and run.

Sport and facilities could be opened up, and hugely expanded, for enjoyment by everyone. This could be run democratically by fans, athletes, coaches and the local community. It could be based around workplaces, schools, communities, and local clubs, as part of a nationally planned set-up sharing expertise and resources.

This would allow everyone to play and take part to whichever standard they wish – just for fun, to keep fit or to push themselves to the very limit and be another Mo – a real hero of the oppressed, poor and working class across the world.

06/07/2022
We use cookies on our website to give you the most relevant experience by remembering your preferences and repeat visits. By clicking “Accept All”, you consent to the use of ALL the cookies. However, you may visit "Cookie Settings" to provide a controlled consent.
Cookie SettingsAccept All
Manage consent