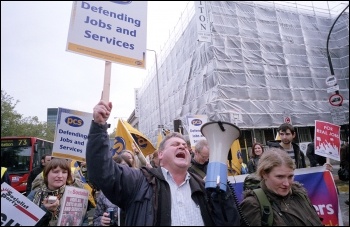 United we are strong, divided we will be defeated. The government knows that and is desperate to divide us - public sector from private sector, old from young, benefit claimants from everyone else...

To avoid the government's trap, and build a united movement, it is vital that we oppose ALL cuts in jobs and services. If we fall into the trap of accepting pay cuts on the spurious grounds that they will stop a local library or swimming pool open, or fighting to save one local hospital but not another, we will allow the anti-cuts movement to shatter into a thousand pieces.

Of course, we will not always succeed, but our starting point must be to fight every single cut. This includes cuts implemented by Labour councils, who are willingly wielding the axes handed to them by the government.

Across the country hundreds of local town or citywide anti-cuts campaigns have already been founded. They have organised numerous local demonstrations and lobbies of councils.

The successful struggle against Thatcher's poll tax was organised around similar local anti-poll tax unions, which later came together to found an All-Britain Anti-Poll Tax Federation at a 2,000 strong conference. 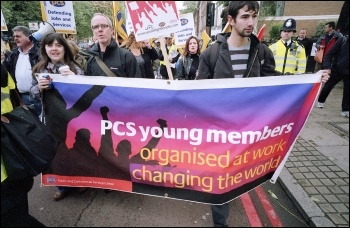 Nationally, the National Shop Stewards Network (NSSN) - an organisation of militant trade unionists - has launched an Anti-Cuts Campaign which clearly opposes all cuts.

The NSSN Anti-Cuts Campaign was founded at a conference of 600 trade union reps, community campaigners and young people in January, 2011 and is appealing to all local anti-cuts campaigns to get involved in its work.