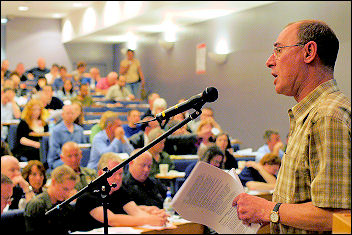 A particularly important factor is the absence of a mass political voice for the working class. Since 1997 the trade unions have given over £100 million of their members' money to New Labour. And what have they got for it? Continual kicks in the teeth! The anti-trade union laws, which are amongst the most repressive in the western world, remain almost wholly intact.

Brown has made it clear that he will not repeal any of them. In the past Labour was a workers' party at bottom even though it had a pro-capitalist leadership.

Today New Labour is capitalist to the core of its being. Anyone who harboured illusions that New Labour would move left in the face of economic crisis only has to look at Mandelson's domination of New Labour today, the man twice sacked for sleaze and who famously declared that, "New Labour is intensely relaxed about people getting filthy rich." His relations with Russian oligarchs show that the 'prince of darkness' has not changed his spots.

The Socialist Party has initiated the Campaign for a New Workers' Party. As part of this campaign we argue that the trade unions should break the link with New Labour and begin to build a mass party that stands in workers' interests.

We support all steps towards independent representation of the working class. If such a party already existed in Britain, it would have the potential to gain support very quickly in this time of capitalist crisis.

The election of two MEPs for the British National Party (BNP) sounds a warning bell that, if there are further delays in the development of such a new mass workers' party it will make it easier for the far-right, such as the racist BNP, to gain support, partly by falsely posing as a party of the 'white working class'.

Therefore the Socialist Party will continue to campaign with urgency for the establishment of a mass workers' party.

We will support any steps in that direction, including a trade union based coalition for the 2010 general election.

At the same time we recognise that a new party will be formed primarily out of workers' and young people's experience in the major class battles of the coming years. 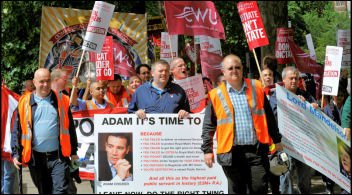 Even if the development of a mass party is delayed a bit longer, this will not prevent many thousands of workers turning towards socialist ideas and joining the Socialist Party.

Within a new mass party there will be different political trends. For the party to be successful it will be crucial it adopts a federal, or umbrella, approach. That would mean that all groups and individuals, provided they are in agreement with the basic aims of the party, should have the right to democratically organise and argue for their point of view.

Some will undoubtedly argue that it is possible to 'reform' capitalism into a more just system, or even to gradually reform it out of existence! In the Socialist Party we are amongst the hardest fighters for reforms for the working class.

To give just one example, we led the 18 million strong movement that defeated Thatcher's poll tax. We are currently involved in many national and local struggles. Our members in the public sector trade unions have consistently fought for united strike action against pay restraint. 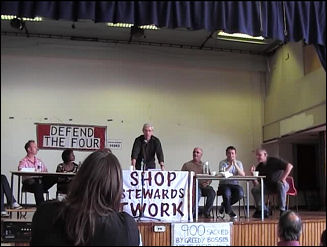 The civil servants' union, the PCS, where we play an important national role, has continued to fight over pay even after other public sector trade union leaders have vacated the field.

At local level workers at the Visteon car plant in Swansea, where the convenor is a member of the Socialist Party, have so far successfully struggled to keep the plant open, and to improve pay and conditions.

In the student field we have initiated and lead the Campaign to Defeat Fees. There are many other examples that could be given. We also play an important role in building Youth Fight for Jobs, the campaign against youth unemployment.

However, we do not believe that capitalism will ever accept permanent or lasting reforms that significantly improve the living conditions of the working class.

History shows that whenever this is attempted the capitalists are prepared to use the most savage means to crush the movement, if they deem it necessary. 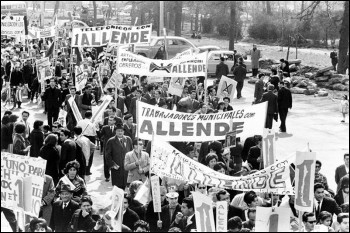 Marchers in support of Salvador Allende in Chile 1964, photo by James N. Wallace   (Click to enlarge)

In Chile, from 1970 to 1973, the Popular Unity government nationalised approximately 35% of industry, but the main levers of economic, and therefore political, power remained in the hands of the capitalists.

This enabled them to carry out a brutal coup, murdering tens of thousands of workers in the process.

Unsurprisingly, Thatcher defended this, saying it was justified by the threat of 'communism' - by which she did not mean Stalinism, but workers' democracy.

Nonetheless, in a country like Britain, it would be possible for an entirely peaceful socialist transformation of society to be carried out.

If a socialist government was to nationalise the 'commanding heights' of Britain's economy, provided it mobilised the active support of the majority of the population - the working class - the capitalists would be unable to stop it.

Of course, if they thought they could get away with it there is no doubt that the other major capitalist powers would attempt to strangle a socialist Britain.

However, they would not be able to get away with it. In today's globalised world one country breaking with capitalism would undoubtedly trigger off movements worldwide, not just to defend a workers' state in one country, but to follow its lead.

Look at the simultaneous movement that took place against the invasion of Iraq, 30 million strong, the biggest in history.

Imagine the movement that would take place in support of a democratic workers' state.

Modern capitalism has created riches beyond the wildest dreams of our grandparents and great-grandparents, with the potential for far more.

Yet we are constantly being told that we have no choice but to accept the erosion of our quality of life, increased poverty, worsening public services and longer working hours.

But why? Humankind has developed science and technique to a level that was unimaginable to previous generations.

While still very limited, our understanding of everything from the stars above us to the secrets of our own bodies and minds is unparalleled.

Humanity is capable of space exploration, has mapped the human genome, can modify genes and clone animals, yet we cannot feed the world - on the basis of capitalism.

For most of human history it has not been possible to satisfy even the most basic human needs. Now, as a result of the labour and ingenuity of working people, the potential exists to eliminate want forever.

The barrier to achieving this is the capitalist system itself. Based as it is on the private ownership of the productive forces (factories, offices, science and technique), capitalism creates immense inequality and deprivation when the potential exists for providing the material components of a decent life for all.

If you agree with this short pamphlet, then join the fight for socialism - join the Socialist Party.

The struggle for socialism needs your talents and abilities. Our struggle does not stop at the shores of Britain.

Capitalism is an international economic system. Multinational companies exploit the entire world in pursuit of profit.

The struggle for socialism is an international struggle.

That is why the Socialist Party is affiliated to the Committee for a Workers' International, which is currently organised in 40 countries, and which fights for socialism worldwide.