Camden council cuts mean four nurseries will lose all their places for two, three and four year olds. Campaigners lobbied the Labour council against the £600,000 cut to the budget on 2 March.

The 'fight for the five' campaign, which is trying to save the remaining local authority nurseries in Salford, took their battle to parliament on 25 April.

After a huge public meeting of 250 angry parents and staff demanded that Salford council "fight for the five" remaining council-run nurseries, mayor Paul Dennett has agreed to do just that

Labour MP Rebecca Long-Bailey, mayor Paul Dennett and a few councillors tried to persuade the crowd they could be trusted to fight to save the nurseries, but were unable to convince them

"Save our Nurseries!" This was the chant of local campaigners, mostly women and mothers, who lobbied a full council meeting in Tower Hamlets town hall, east London

The recent proposals from Tory childcare minister Liz Truss to "cut red tape" and "map out the government's childcare aspirations" may sound good, but in reality will translate to a poorer service, job losses and an inevitable increase in child safety issues, writes John Cosgrove , Liverpool Socialist Party.

Another protest was held on Wednesday 17th October at HMRC in Nottingham against the proposed closure of the workplace nurseries which many workers rely on... 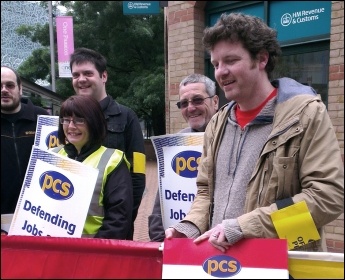 Following a month of solid and well-organised campaigning, two workplace nurseries in the revenue and customs civil service department (HMRC) have been saved from closure