This issue of the Socialist covers International Workers' Day, Friday 1 May 2020. May Day is always an important event in the calendar of the workers' movement. It is doubly so this year

Overworked, underpaid, struggling to afford the basics - this is true of the situation facing many 'key workers' that the Covid-19 lockdown has so clearly demonstrated society is dependent on.

The coronavirus is triggering a serious capitalist crisis. Millions of people are worrying about the prospects for their health, jobs and security

Which paper details a fighting industrial strategy to beat the anti-union laws? Who explains how councils can set budgets that defy the Tory cuts? Where can you read about the practical programme needed to reconstitute a mass party for working-class political representation?

Help us strengthen ties between the Socialist and workers, and gain valuable income for the working-class press

International workers' day - May Day - was marked by rallies and demonstrations around the world. 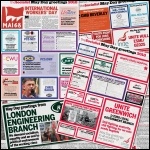 The Socialist Party sends May Day greetings to all its members and supporters and to workers across the trade union and labour movements in Britain and internationally.