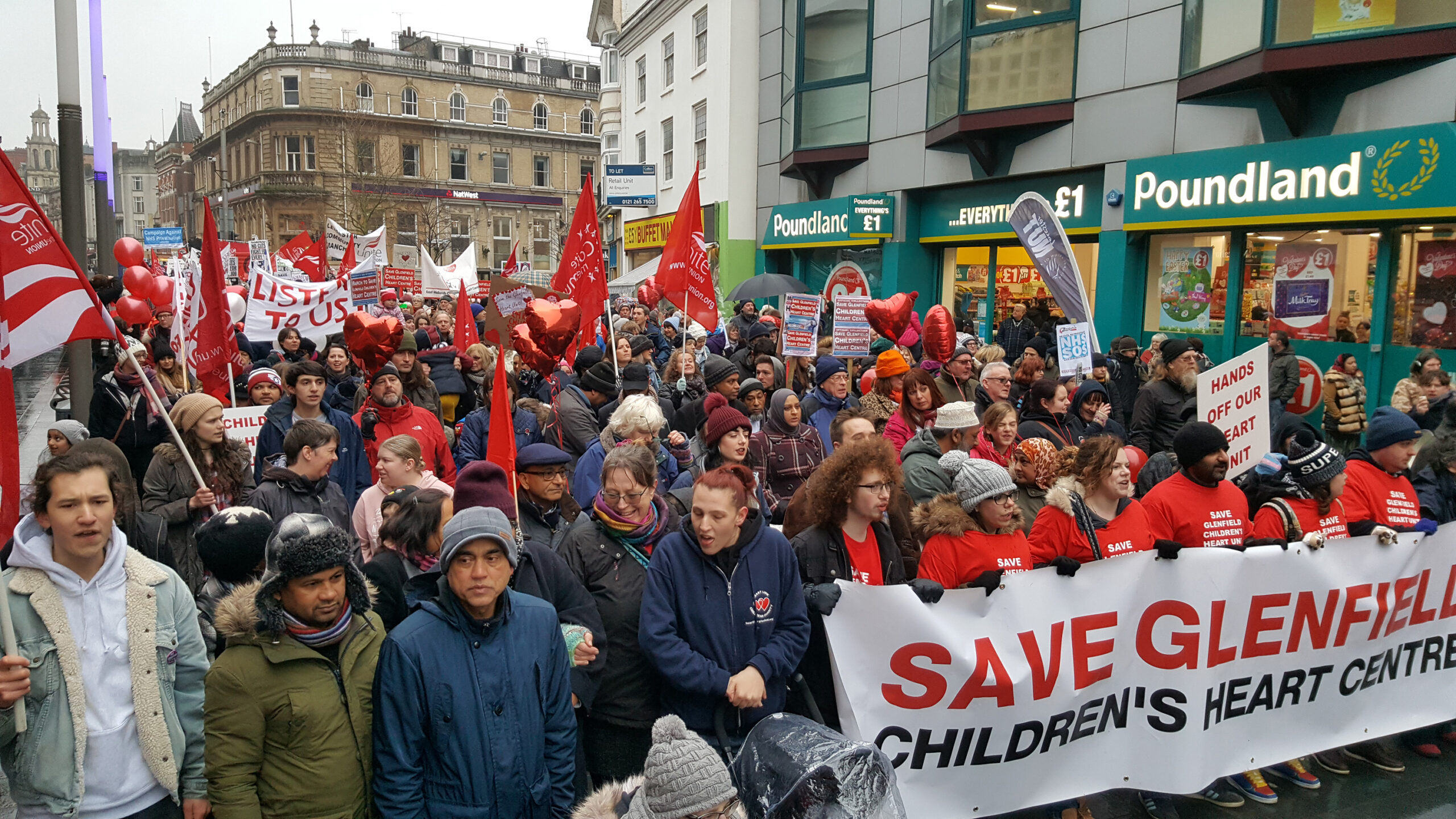 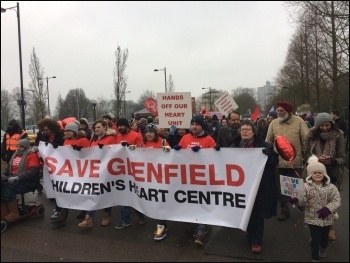 Victory at Glenfield shows people power can save our NHS

Celebrations were taking place in Leicester city centre on 30 November following an outstanding victory for the campaign to save congenital heart surgery at Glenfield Hospital.

A mood of relief and of jubilation spread from campaigners to people across the region. We hope this victory encourages campaigners across the country fighting to save the NHS.

Congenital heart surgery at the Royal Brompton and Harefield NHS Trust in London, which had its own campaign, has also been saved.

Closure of the Glenfield children’s heart centre would have left the East Midlands as the only region in England without such a highly specialised unit.

Campaigners warned the result would be devastating for the families whose children’s lives are saved by Glenfield. This affected me personally, as my son had open heart surgery there two years ago.

The campaign has involved thousands in a large number of demonstrations and meetings, the biggest march having over 2,000 on it. 130,000 people signed a petition online and on paper.

We helped 7,500 people engage in a very tricky and complex ‘consultation’. This is all despite the difficulty of congenital heart patients being a small minority in a very widespread population. 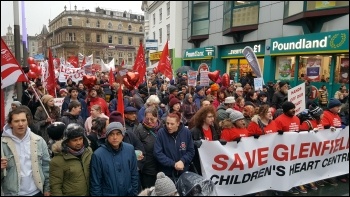 NHS England told the hospital trust 18 months ago that it wanted to end surgery. But the threat had actually been hanging over the centre for years.

A previous attempt to close a number of units around the country failed about four years ago following a judicial review and the government’s ‘Independent Reconfiguration Panel’ advising the health secretary it had been badly thought out.

Bosses have been forced into a u-turn by a mass campaign that brought together a wide variety of people.

The success belongs to the determination and hard work of patients, families, staff and campaigners. All played their part.

Unusually for a local health service campaign, the enemy in this case wasn’t the local trust or ‘clinical commissioning group’.

NHS England was proposing the closure, and the trust opposed it. This meant some of us were standing alongside people we strongly disagreed with on other issues, such as other NHS cuts.

While it was crucial we had arguments to put forward, really the mass campaign to mobilise support was decisive.

NHS England’s arguments were flawed from the start. The key argument was about the number of operations carried out by each surgeon per year.

These are incredibly complex, sometimes carried out on baby’s hearts the size of a walnut. We believe the targets bosses wanted to set – ‘standards’ in the jargon of NHS England – of 125 operations per surgeon per year were arbitrary.

Some TV journalists inaccurately implied that Glenfield was somehow unsafe. Nothing could be further from the truth. 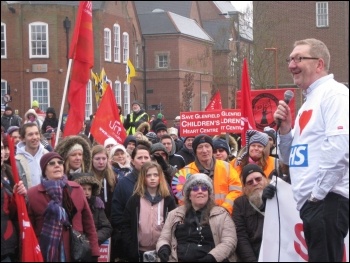 It is “good” in all areas and “outstanding” in effectiveness according to the Care Quality Commission.

The trust was able to show that even these targets could be met in a short period of time. But as correct as our arguments were, it was necessary to put mass pressure on NHS England and the politicians to make sure we won.

We are proud of the role that Socialist Party members played in this victory. Very soon after the threat was announced we called a public meeting to discuss building a campaign.

We linked up with families and campaigners who had been involved in the battle to save the centre in the past.

This included a local charity, Heart Link, which funds many of the facilities at Glenfield, made up of working class people whose own families were affected.

People worked incredibly hard getting the petitions signed and the consultation documents filled in. We reached out to staff and trade unions, and aimed to build widely in the community.

The Save Glenfield Children’s Heart Centre campaign was set up. Its first public meeting had 150 at it.

From there we mobilised a demo of 1,500. We held a regular organising committee which was inclusive of people from different backgrounds.

Importantly we linked community campaigners with the trade union movement, getting backing from a series of local and regional trade union bodies. We even had Len McCluskey, leader of Unite the Union speak at one of the demos. 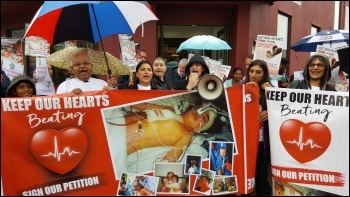 We also organised a series of public meetings across the East Midlands to go through the complicated questionnaire NHS England wanted filling in as part of its consultation.

We even held a day of action in 25 schools – pupils turned up wearing red, held assemblies, sent their support and made placards for a demonstration.

We already had plans to go to the next phase of the campaign if the NHS England board meeting on 30 November stuck to the proposals. But all the hard work paid off, and we won!

Although NHS England dropped its plan to close two of the congenital heart centres, Glenfield and the Brompton, unfortunately it didn’t in the case of the third unit. This was in Manchester, where to our knowledge there was no real campaign.

In fact, the threat hanging over Manchester meant staff moving elsewhere to secure jobs, already resulting in collapse of the service.

This is an indication of the stupidity of the bureaucratic approach to these issues by NHS England.

If you think something is wrong, why not discuss it first? Why start with a threat of closure? If the same had happened at Glenfield and Brompton it would have immediately resulted in a disastrous crisis for the service nationally – not to mention a crisis in linked services such as paediatric intensive care.

It raises the need for genuine democratic control over the NHS, involving the workers and users of the NHS. NHS England is in fact a quango set up to deflect the blame from the government.

All through the campaign, NHS England said it was nothing to do with cuts. Eome in the trust accepted that.

Yet we made the point that at every meeting bosses would have discussed the £22 billion cuts they have been obliged to make by the government, along with ‘rationalisation’ to achieve them. Even the board meeting on 30 November discussed “efficiencies” two items before the congenital heart units review!

Above all we believe the victory of our campaign proves that if you fight you can win. Some battles are already being won.

In the East Midlands we have seen successes in the Chatsworth ward campaign, for example.

But of course the war is far from over. These myriad local struggles need to be linked up, which ‘Health Campaigns Together’ aims to do.

We need to unite the communities fighting for their local services with the trade unions representing workers in the NHS and beyond in a national fight to save our NHS.

Gill Smart, of the Heart Link Children’s Charity which is made of local working class families and helps fund the centre, said:

“People power is fantastic. Without the people behind us we wouldn’t have got this result, and I would like to thank everyone who took the time out to vote in the consultation and do the marches and everything. Because without their help we wouldn’t have achieved this outcome.”

Shirley Barnes, one of the main organisers of the campaign, said:

“This campaign entailed a massive amount of work by hundreds of people.

“Everyone who got their family and friends to sign the petition, or complete a consultation paper; every shop, hairdresser, pub, restaurant that had petitions for us.

“The campaign committee was a very, very disparate group of people, parents, trade unionists, political activists etc, who would not have come together under any other circumstances, but who shared a great aim of saving a much-needed heart unit.

And it was this working together and using all their different skills and abilities that made this such a successful campaign. People power at its best!”